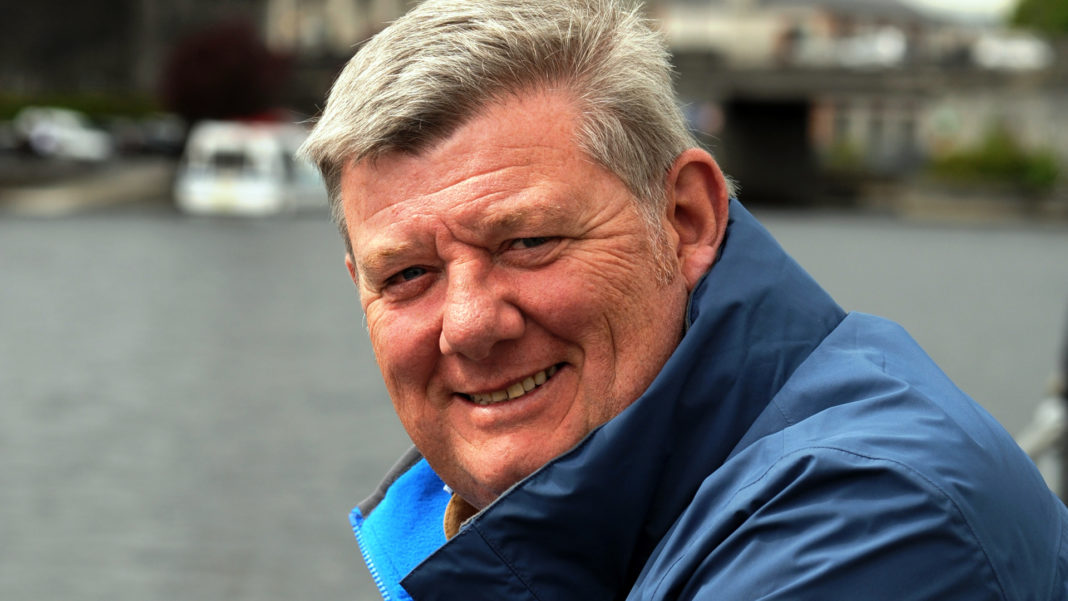 “Bless me, Father,” says John Creedon, leaning in as though in prayer, “It’s been one year since my last interview.”

I met Creedon for a coffee in Cork’s Imperial the other day. Since I started pretending to be a journalist, a few years ago, one of the things I look forward to most is my annual Evening Echo interview with him, a man I’ve ‘known’ over thirty years, since the days he played Lou Reed and Jim Croce and The Alan Parsons Project on the Cork pirate station E.R.I.

If you know John Creedon from the telly or the wireless, you know the man. What you see, or hear, is what you get. He’s affable, thoughtful and mischievous. This is the man who introduces Creedence Clearwater Revival as ‘the cousins’ (think about it). There’s a passion for music, of course, but there’s a bla’guarding and a passion for life too.

After all these years on the air, he says he sees his hugely-popular 8pm weeknights RTÉ Radio 1 show – up another 9,000 listeners in the last JNLR figures – as second nature.

“I’m a shopkeeper’s son,” Creedon says, “so standing behind the counter and chewing the fat with the customers is second nature to me. It’s what we do. It’s what we’ve been doing for generations. It doesn’t feel hugely different on the show. Just roll the shutters up and the folks are there. ‘How’s it going, lads!’”

In his quarter century with RTÉ, Creedon has done every shift from early morning to late at night. “I’ve literally rocked around the clock,” he says. “I’ve stayed on-air during a break-in, I’ve waded through three feet of water during floods and once, despite a suspicious package which led to an anthrax scare with army bomb disposal personnel sealing the building, the show still went on!”

He describes his show as “zipping along grand. It’s simple, it’s like falling off a log and I suspect that’s why I love it. There’s no effort on the inside, so I hope I’m causing very little effort on the outside either!”

Reading out listeners’ texts and tweets is often a big part of the show. “For a lot of Irish people,” he says, “there’re ideas flying around in our heads all the time. Concepts, thoughts, one-liners, notions. Twitter appeals to me in its brevity and levity. That’s what we should put on the coat of arms: Brevitas et Levitas! Keep it light and keep it moving and don’t get too profound or you’ll be caught out!”

Creedon says he thinks it ‘a sort of an exhale for many’ of his listeners and he believes the show reflects the time of evening, a time to relax, unwind and listen to good music. When I ask if there’s any negative aspect to the job, he pauses.

“I remember I got a very, very, nasty review about ten years ago. Look, I know if you put your head up there then you’ll have to be prepared to take it on the chin. This review said ‘Creedon is a third-rate presenter’.

“My daughter Nanci, who was then about 12 or 13 or 14 – she’s a strong character – she said ‘Are you okay Dad?’ and I said, ‘Ah no, sure look, you’d want to be a stone not to get a lump in the throat but, no, I’m grand’. And she kinda thought about it and then she said, ‘Well, Dad, do you know what I was thinking?’ And I said ‘No, Nance, what?’ And she said ‘I was thinking I’d rather be a third-rate presenter than a first-rate critic’.

“I’ve kept that one in my back pocket, d’you know?”

Although radio remains Creedon’s first love, he delights too in doing his work for television, which he describes as ‘tiring but never boring’ and, though TV was never his plan, he feels he has grown into it.

“I feel the older I’m getting, the closer to me I’m getting, and that just makes it easier. I’m not trading as a matinee idol, so I don’t feel the need to go into the gym for three months before making a show. And, also, increasingly, the subject matter is coming from my own book, from my own interests.

“I’m just so fortunate that I’m out talking about place-names,” Creedon laughs, “wading up to my neck in water, catching frogs and acting the eejit.”

Creedon’s new TV show, Creedon’s Shannon, starts at 6.30pm on RTÉ1 on Sunday, 23rd July and sees him trace the course of Ireland’s greatest river from its official source in County Cavan – or perhaps before it, north of the border – down the lakes of Lough Allen, Lough Ree and Lough Derg and on out the Shannon Estuary to the broad Atlantic. En route, he heads underground to visit the Arigna Mines, makes poitin on the shores of Lough Derg, and meets river folk and island people.

Taking a sip from his coffee, Creedon shakes his head and says “I’m so lucky. I’m blessed to be able to carve out a niche where I can explore my own interests – be they history, or archaeology, or folklore, or language, or people, or the human condition – and to do so while meeting so many lovely people.”

Chatting with John Creedon is always an interviewer’s dream and a transcriber’s nightmare. He’s friendly and hilarious and fascinating and ridiculously generous with his time. An interview that should take an hour at the most lasts nearly two, and every bit of the chat is gold. Once I’ve written up and submitted my piece, I immediately feel guilty that I just couldn’t fit everything into 1,000 words.

I text Creedon to apologise for short-changing him and he responds that, no, no, not at all, he wants to thank me for lending an ear.

I look forward – presumptuously – to next year’s interview.

The John Creedon Show airs at 8pm, Monday to Friday, on RTÉ Radio One. Creedon’s Shannon begins at 6.30pm on RTÉ1 on Sunday, 23rd July.