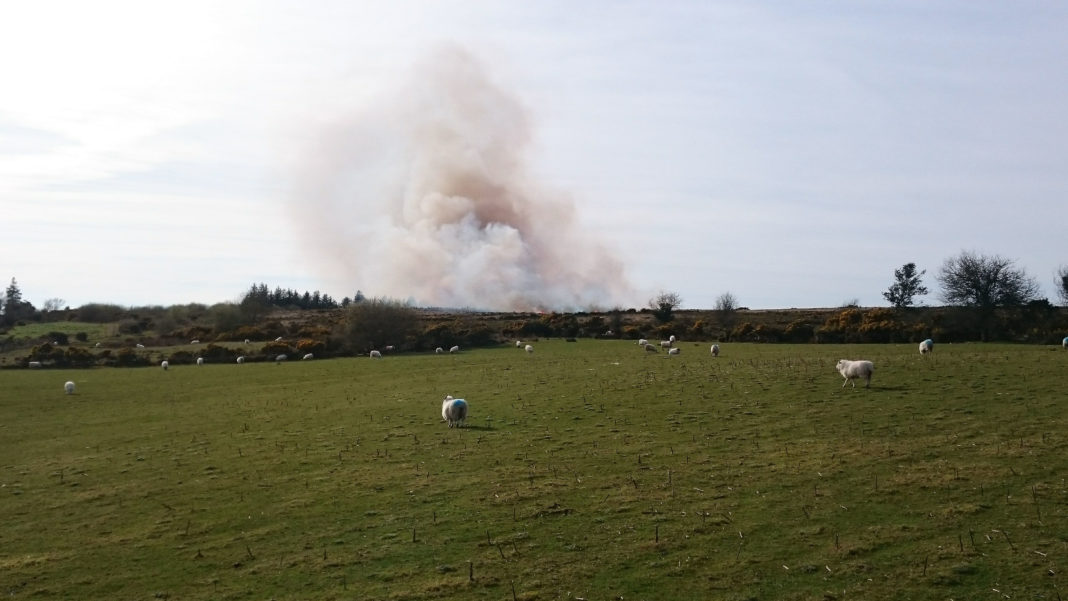 A fire at Kilally, Kilworth in March this year and three fires that broke out on the Knockmealdown Mountains in County Waterford in April, are among 97 illegal wild fires included in a formal complaint by the Irish Wildlife Trust (IWT) to the European Commission.

The IWT used these wild fires as an example that the Irish government is failing to protect threatened wildlife.

The Avondhu previously reported that a wildfire destroyed more than an acre of land in Kilworth, near to the Lynch Camp, on March 26th. Fire crews from Fermoy and Mitchelstown attended the scene and battled the blaze for a number of hours.

The fire was one of 97 illegal wild fires reported between March 24th and May 22nd across 19 counties.

LACK OF POLITICAL WILL

The IWT has said the Irish government is failing in its duty under the Birds and Habitats Directives to protect threatened wildlife in uplands and hills. 39 of these (40%) were within sites designated under the Natura 2000 network (Special Areas of Conservation or Special Protection Areas under the EU’s Habitats/Birds Directive).

IWT Campaign Officer, Pádraic Fogarty, said there is a lack of political will to address this issue. “Irish mountains have suffered an ecological catastrophe over the past 50 years. They are no longer the beautiful, wildlife-rich places they once were. Landscapes and nature have been replaced with scorched land and plantations, which contribute to carbon emissions, pollution, erosion, flooding, loss of scenic value and livelihoods. This has happened not because of lack of resources or uncertain science – but a lack of political will.”

Mr Fogarty said policy measures which would dramatically reduce the levels of fires include removing the requirement for farmers in uplands to have vegetation at ‘grazable height’, designing new eligibility criteria which include options for rewilding the land, high nature value farming, or sustainable grazing systems with re-establishment of native woodlands.

Specific management plans for all Special Areas of Conservation and Special Protection Areas should be produced, he said, which sets out how our uplands can be restored.

This should include removal/replacement of plantations of non-native coniferous trees.