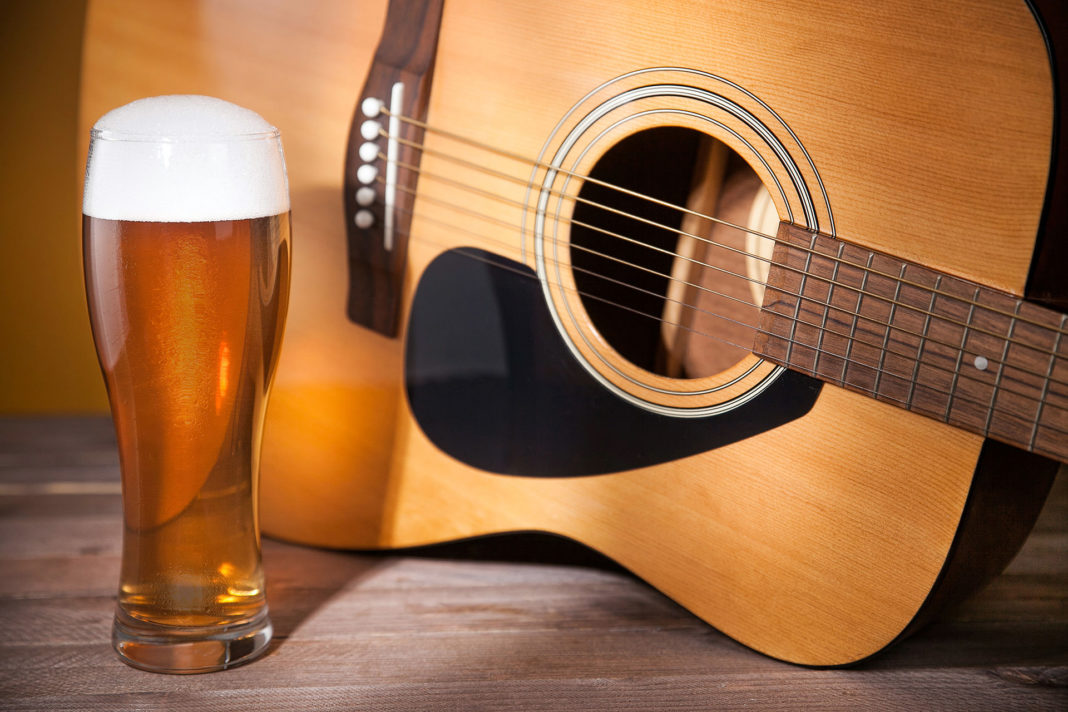 Join me for a pint, hopefully not so far in the future, as you step in from the night air, past the smokers at the door, and the sound of music greets you as you cross the threshold, and a great singer goes to town.

“Hot chilli peppers in the blistering sun / Dust on my face and my cape / Me and Magdalena on the run / I think this time we shall escape.”

Inside, as your eyes adjust to the candlelight, there’s a good crowd standing about with pints in their hands, and to your right a guitarist is laying into a spirited version of Bob Dylan’s Romance in Durango, while another man accompanies him on mandolin.

“Sold my guitar to the baker’s son / For a few crumbs and a place to hide / But I can get another one / And I’ll play for Magdalena as we ride.”

Helloing the familiar faces, and excusing your way to the bar, you call a drink. The woman behind the counter already has the glass in her hand, ready to fill. It’s not quite standing room only, but it’s busy tonight, as it always is when the lads are playing. As you pay for your pint, you spot – there, by the empty fireplace – a free stool, and beside it, a place to rest your drink.

You sit down, and you smile, exactly as the singer really hits his stride, telling Dylan’s fable of a doomed man who attempts to escape justice, fleeing the scene of a murder with his beloved, and dreaming of the day they will be wed.

“No llores, mi querida / Dios nos vigila / Soon the horse will take us to Durango / Agarrame, mi vida / Soon the desert will be gone / Soon you will be dancing the fandango.”

The bar, in this imaginary future hopefully only a few months away, is Charlie’s on Union Quay in Cork, right next door to what used to be the legendary Lobby Bar of Magic Nights fame, as immortalised by John Spillane, and on guitar and vocals is the legend that is Hank Wedel, accompanied on mandolin by the mighty Ray Barron.

Really it could be any pub in Ireland, just as it was, a little over a year ago, before the world stopped.

We’re a ways off that imaginary future yet, with pubs unlikely to open for indoor drinking for months yet, and even beer gardens probably – at the time of writing – two months away. Perhaps outdoor dining might commence next month, but, as always in the grip of a pandemic, everything is subject to change.

Still, the vaccine programme is finally taking off, and perhaps it wouldn’t be too reckless to think that maybe, just maybe – some fourteen months after our lockdown nightmare began – the light at the end might at last be in sight. (Insert oncoming train joke here.)

When we do reopen, though, it won’t be plain sailing, with Public Expenditure Minister Michael McGrath this week effectively warning that we haven’t a washer, as he attempts to put manners on spendthrift ministers; and one senior Fine Gael politician predicted to me last week that the country could be facing “a tsunami of redundancies” as businesses long-mothballed struggle to re-open.

Hard times, hard times, come again, with apologies to Stephen Collins Foster, not so much no more, but rather come again full stop. But for all that, as we inch out of (hopefully) our final lockdown, we will at least be in a more positive position to dream about something resembling normality, and maybe even a night in the pub, with some great live music.

Meanwhile, in the imaginary version of a post-lockdown Monday night in Charlie’s, as Hank and Ray bring the song home, things are not looking too good for Bob Dylan and Magdalena, as their past seems to have caught up with the fugitives.

“Was that the thunder that I heard? / My head is vibrating, I feel a sharp pain / Come sit by me, don’t say a word / Oh, can it be that I am slain?

“Quick, Magdalena, take my gun / Look up in the hills, that flash of light / Aim well my little one / We may not make it through the night.”

That’s the point where Hank and Ray really bring the house down, finishing the song in an exhilarating crescendo of voice, guitar, and mandolin, as the crowd applauds and cheers.

That future cannot come soon enough. It’s probably going to be at least Christmas before Hank and Ray can tear into Romance in Durango in Charlie’s again, but in one sense it’s now so close that you can almost taste the pint.

The dogs are barking and what’s done is done

Sadly, this will be my last column with The Avondhu.

I began here at the start of March, 2016, with a column in which I was pretty cruel to a TD who had just lost his seat, and I would like to think that I started as I meant to go on.

The five years have really flown. I’ve loved it, and I really want to thank Declan, who put up with a lot, and Kevin, and Liam, and Taija, and Lil, and all The Avondhu team, for all they did for me. They gave me a very broad brief, and they were always extremely supportive.

It would be remiss of me not to thank too, my old friend Colin Hanley for recommending me for the gig.

It’s been an honour and a privilege to have been part of a newspaper which is so intrinsic to my village, my town, my region, and my home.

To Rachel, who proof-read most of these columns, and who was always right, there, I’ve said it, thank you, always.

To my sister Geraldine, who always knew exactly when to encourage me, I still find myself thinking I must call you. I love you, and I miss you.

Finally, to you, for reading, thank you for clicking on the link. I never did get tired of explaining that no, I don’t just write a random, unfinished paragraph in the paper every week, there’s loads more if you just go online, and come on, it’s really simple, you just type the address into your laptop or your phone, and you click the link, no, no, really, trust me…

And – seeing as I won’t be here to wish him a happy 80th birthday next month – thanks to The Avondhu for indulging me in yet another column referencing Bob Dylan.

I hope we’ll meet again – if you’ll forgive one final Springsteen quote – further on up the road.