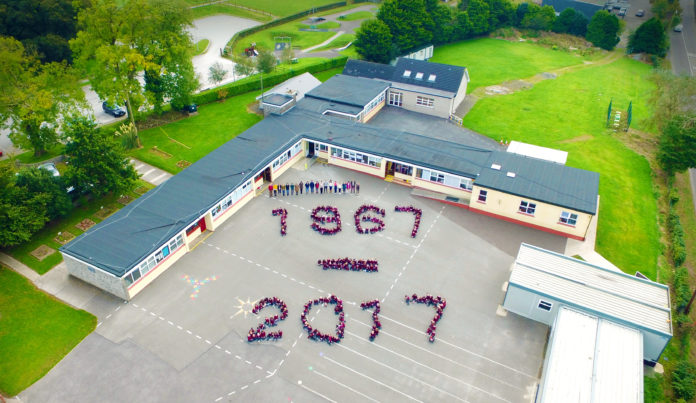 Like every other village and town in Ireland, Castlelyons takes great pride in its local national school. Progressive and forward looking, Castlelyons NS is a vital resource for parents and pupils.

Fortunate to be overseen by a very committed board of management and aided by an energetic parents’ association, the school, which currently has 211 pupils, is drawing up ambitious plans for the future, which makes provision for the construction of 3 additional classrooms.

Before all that happens, there’s the business of celebrating its 50th anniversary (1967 – 2017). To mark this important milestone, the school is organising a ‘ceiliuradh’ or day of celebration on Sunday, May 28.

A 50th anniversary Mass at 11.30am will be followed by a variety of activities in the school. It promises to be a nostaglic occasion as teachers, pupils and parents reflect on how far Scoil Naisiunta Chaisleain Ui Liathain has progressed over 5 decades.

During that time, the school has evolved from a modest structure to the modern complex that exists today. In keeping with the norms of the time, boys and girls were educated separately. Reflecting the growth that’s taken place in the interim, Castlelyons National School now has 14 teachers in addition to 6 Special Needs Assistants.

The school has also been fortunate with the calibre of teacher it has been able to attract over the years. In 1998, Nelius de Roiste took over from the long serving Cecil Roddy and under his stewardship pupils numbers have increased and significant improvements have been realised.

Looking ahead to the forthcoming celebrations, Mr de Roiste said it was an occasion open to anyone with a past or present connection to Castlelyons National School.

“We are extending an open invitation to all those who have an association with the school. May 28 is a day of celebration and we want the occasion to be as inclusive as possible”, Mr de Roiste said.