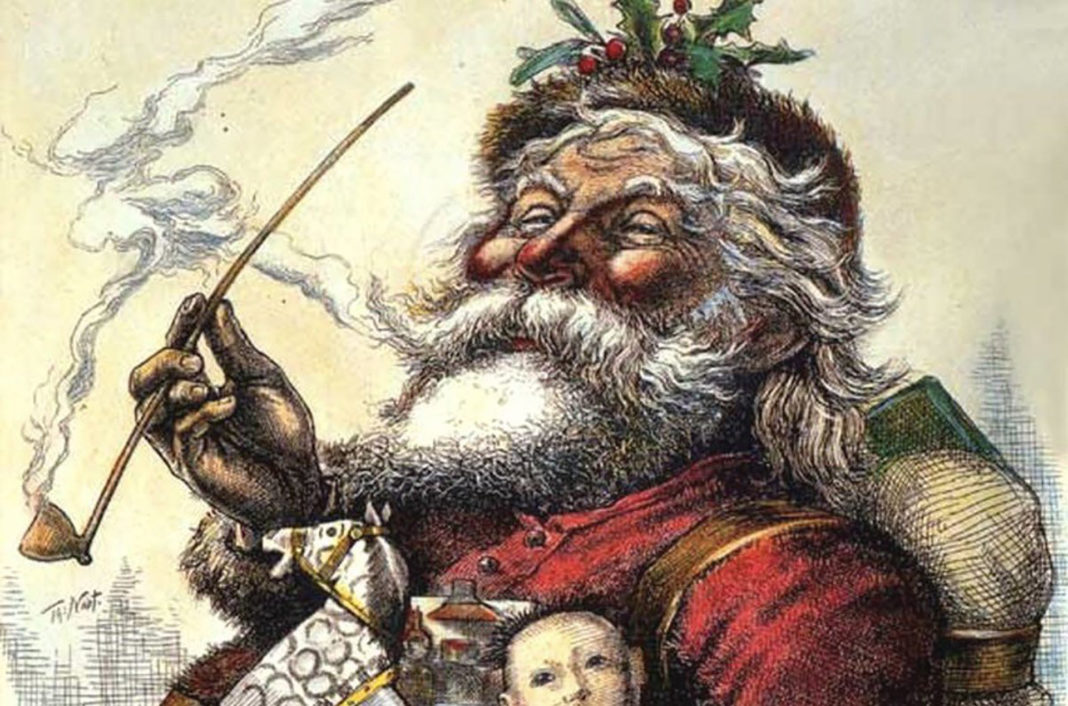 Last Christmas Eve, I visited the grave of Santa Claus.

The first thing to say, of course, is that Santa Claus does not – and cannot – have a grave.

Santa Claus cannot die and Santa Claus never will die. Santa is – as every child knows – a magical being, given life and strength by the power of belief. Santa lives in the North Pole and once every year, at Christmas time, he sails the night sky in an enchanted sleigh towed by his flying reindeer. The most famous of those, of course, is Rudolf, whose shiny red nose has saved Christmas more than once.

Maybe, though, maybe Santa gets a little tingle when he stops to deliver presents to the children of Thomastown in County Kilkenny. Maybe he even takes a wistful look toward Jerpoint Park, to the ruined Church of Saint Nicholas. After all, that’s where he’s buried.

Before Santa became Santa, a very long time ago, he was a human being named Nicholas. He was born, more than one thousand, seven hundred years ago, on March 15 in the Year of Our Lord 270 in what is now southern Turkey.

Nicholas was the son of wealthy Christian parents and he was a very religious child. Nicholas’ parents died when he was very young, and his uncle, who was the local bishop and also called Nicholas, took him in and raised him. In time, Nicholas was ordained a priest and years later he too became a bishop. He became renowned for his generosity and his secret gift-giving.

Interestingly, he attended the First Council of Nicaea in 325, which was convened by the Roman Emperor Constantine, and which would set in stone what would become accepted as the details of the story of Jesus Christ.

Legend has it that Nicholas – who believed that Jesus was co-eternal with God the Father (meaning Jesus existed with God and as God since the beginning of time) and was thus as divine as God – became so angry at the heretic Arius – who contended that Jesus was created by God and thus less divine – that Nicholas punched him in the face. Later years obviously mellowed Santa.

Other details were added to the story of Jesus at Constantine’s insistence. As the English writer Alan Moore puts it, Rome was “a city divided by different theological factions, the largest and noisiest probably being the early Christian zealots. Then there was the cult of Mithras, which was smaller but which included the bulk of the Roman Military. Finally there was the cult of Sol Invictus, the Undefeated Sun, which was relatively small but very popular amongst the merchant class.

“Constantine’s posse came up with a composite religion to unite Rome: Christianity would incorporate large chunks of Mithraism, including the stuff about being born in a cave surrounded by shepherds and animals on December 25, and would make concessions to the cult of Sol Invictus, the Undefeated Sun, by sticking a big Sun-symbol behind the messiah’s head in all the publicity hand-outs. This is politics.”

During his lifetime, tales of Nicholas’ great kindness spread and with them legends and tall tales of miracles he had performed. It was said he saved three young women from shame by giving their impoverished father dowries, which Nicholas may have thrown down the chimney.

He was said to have saved the town of Myra from a famine in 311 by performing a loaves-and-fishes miracle with a ship cargo of wheat. He was even rumoured to have resurrected three murdered children.

Being human, Nicholas eventually got old and – at what would have been at the time the ancient age of 73 – he died on December 6 in the year 343.

But that was only the beginning.

His tomb became a popular place of pilgrimage but – and this gets gruesome, so adults look away – in 1087 Italian sailors seized half of St Nicholas’ skeleton and brought it to Bari where those remains lie today in two churches, one Catholic and one Orthodox Christian. Venetian sailors later claimed the remaining fragments of the skeleton and brought them to Venice, where the church of St Nicholas was built.

However, there is another legend about Saint Nicholas.

It is a historical fact that Norman knights took part in the Crusades and the Normans in Kilkenny were well-known as collectors of religious relics. Who really knows?

What’s important is that in death, Nicholas became bigger than a man, bigger even than a saint.

And everyone knows that stories get stronger every time they’re told. And if it’s a really simple story, a really powerful story, like a story about a holy man who secretly gives gifts and wants nothing in return, well, a story like that can become magical.

The story of Nicholas grew as it spread, gaining power as it went. In Europe, it bumped into Martin Luther’s legend of the Christkind – a magical version of the Baby Jesus who gives gifts to children – and absorbed it.  In Britain, it met the story of Father Christmas (think Charles Dickens’ Ghost of Christmas Present) and absorbed that too. In the Netherlands and Belgium, Saint Nicholas became Sinterklaas, where he’s celebrated still.

By the time the story reached the New World, Sinterklaas was Americanized to Santa Claus and in 1823, the publication of “A Visit From St Nicholas” (“‘Twas the night before Christmas, when all thro’ the house Not a creature was stirring, not even a mouse”) gave new impetus to the legend.

In 1863, the cartoonist Thomas Nast drew Santa as a portly, white-bearded gentleman giving toys to children and the picture was almost complete. The North Pole, the elves, Rudolf, Mrs Claus and all the other details grew from there.

Contrary to persistent urban myths, Santa wore red and white long before Coca-Cola portrayed him in those colours. In fact, Santa as we know him, in his white-trimmed red suit and cap, appeared on the cover of “Puck” magazine in the first years of the 20th century.

Given life by the power of belief, Santa Claus has come to be the embodiment of Christmas for millions of children around the world, a magical being of great joy and kindness.

This Christmas Eve, even as he races around the world, perhaps Santa will find the time to stop at the ruined Church of Saint Nicholas in Kilkenny to pay his respects to the man he was before he became Santa.