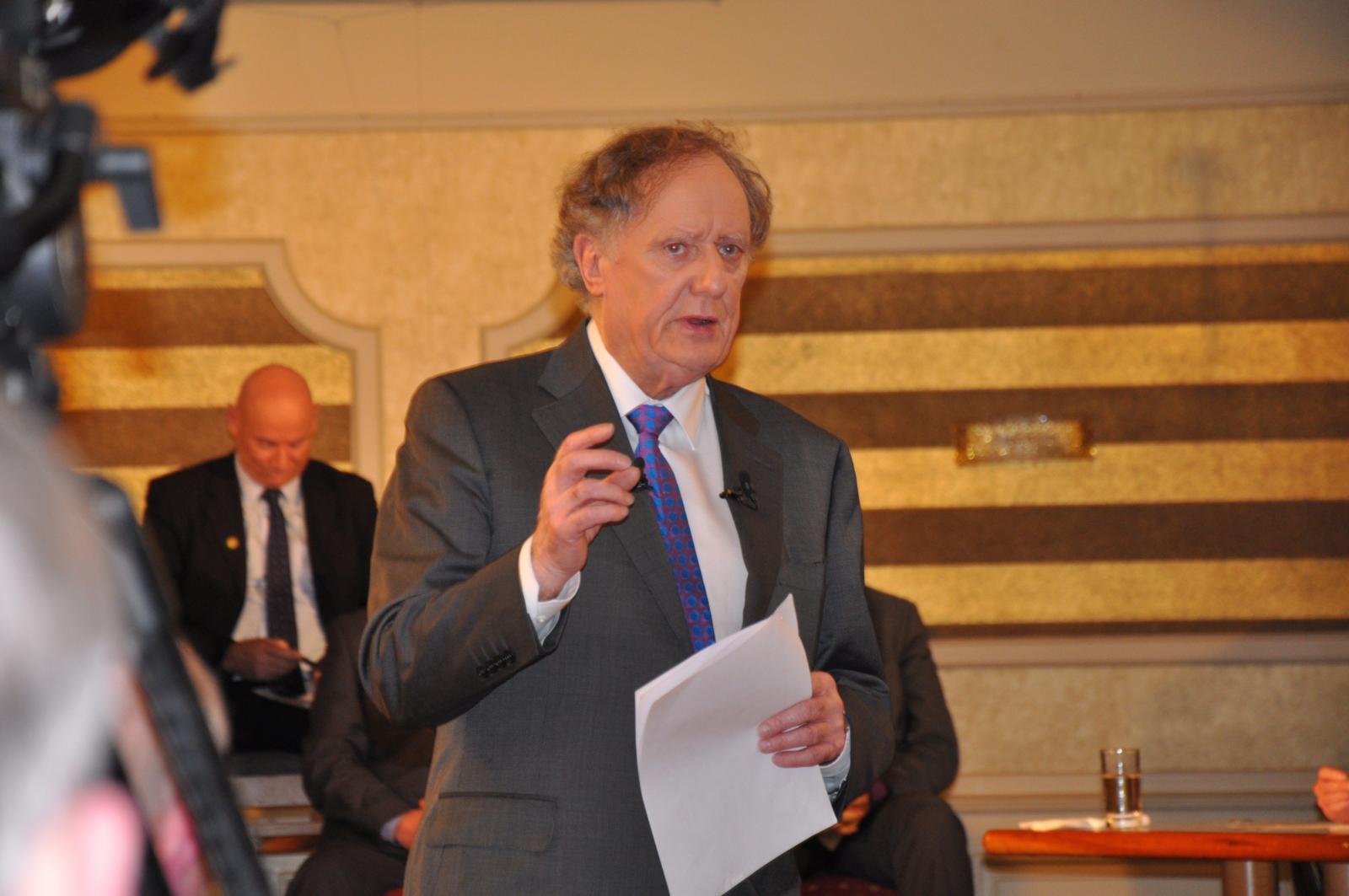 The circus was in town on Monday night, as Vincent Browne rolled his People’s Debate into the Firgrove Hotel in Mitchelstown for the Cork East constituency debate. A large crowd packed into the function room, keen to test out the assembled candidates on the burning issues of the day.

Whether he liked it or not, Labour’s Junior Minister Seán Sherlock was positioned up next to Vincent, while a host of other election candidates crowded in behind. Fianna Fáil was represented by members of two political dynasties; Michael Ahern’s daughter Barbara Ahern, recently in the door from Gibraltar, and Ned O’Keffe’s son Kevin who is attempting to secure a seat in the constituency at the second time of asking.

Prior to the debate, David Linnane from the Evening Echo gave his predictions for the election. In one of the ‘most volatile’ constituencies in Cork, he said Minister Sherlock’s seat could be saved thanks to the ‘damage’ Sinn Féin have done to themselves recently, while Fine Gael’s David Stanton is the bookies favourite – much to the confusion of Vincent.

There should be a second seat for Fine Gael, he said, going to either Tom Barry or Noel McCarthy. The latter, with a ‘massive personal vote’ could be a ‘dark horse in the election’. He added that one of either Ms Ahern or Cllr O’Keeffe should take a seat for Fianna Fáil.

Questions began to filter in from the audience, beginning with the economy. While many described the recovery as one with only a trickle down effect, Minister Sherlock didn’t agree. “Prior to 2011, this country lost approximately 350,000 jobs within a short space of time. If you track the unemployment figures across the towns, we are seeing that these unemployment rates are actually coming down,” he said.

One audience member spoke of the ‘demise of rural Ireland’, saying he couldn’t see any recovery where he was standing. “It’s the lack of recovery if anything because we have all these added charges on,” he pointed out. Another spoke about the need to ensure the future of the dairy industry. “Most farmers are on their knees, and there’s a lot on their backs,” he said.

Minister Sherlock, as the only TD at the debate, was left to field the brunt of the questions and play down the criticisms. Vincent eyed him squarely through his sniper sight, saying were it not for ‘fortuitous exchange rates’, Ireland’s economy would not be where it is today. The recovery, he added, had ‘nothing to do with the Government’ but was thanks largely to external factors like the value of the Euro against the UK’s Sterling and the US’s Dollar, Ireland’s two primary export markets.

“I think that’s an overly simplistic analysis,” countered Minister Sherlock. “The reasons I say that Vincent, is because if you look at the enterprise base around the country, what drives jobs is exports and yes it’s true that oil is cheaper and that is an external factor, but you still have to go out and bring in the business.”

Mr Sherlock made a point of mentioning ABEC in Fermoy, the work of the IDA and Enterprise Ireland to grow jobs, and the skill-set of the Irish people, as factors in the emerging national recovery.

“Let’s not revise history here tonight,” pleaded Minister Sherlock, as one OAP member of the audience mistakenly accused Labour of taking away the OAP Christmas Bonus. “We did not abolish the Christmas bonus,” he assured the gentleman, whose rebuke ‘well I didn’t get it’ raised much laughter from the audience.

Vincent pointed out that it was in fact Fianna Fáil who removed the bonus, a point he levelled at Kevin O’Keeffe. “You took away the Christmas bonus,” he said. “We did,” returned Cllr O’Keeffe. More laughter from the audience.

“Given that you started all this, that you were to blame for starting the crisis, why should anyone vote you?” Vincent asked. In reply, Cllr O’Keeffe said Fianna Fáil ‘served our penance in 2011’. “Oh there’s much more penance to go,” rallied Vincent.

Cllr O’Keeffe, buoyed by the swell of home support in the audience, reminded his host of his party’s successes in the 2014 local election, winning the most seats in the country.

AAA’s Ciara Lombardi Roche weighed in: “The bottom line really is Fianna Fáil and the Green Party signed this country away before I was even able to vote. I’m only 22, I didn’t even have a chance to have a say. But Fine Gael and Labour carried it on.

“Unemployment isn’t down, half a million young people have emigrated

There are no houses – me personally, last year, me and my family were homeless from March to September and it wasn’t a good time. But we’re just one example of what’s happening in this country. And you said East Cork is affluent, I live in Cobh – it’s not affluent,” she said.

“Abortion”, announced Vincent, which was the cue for heavy-laden, aging males to start clicking their fingers for a microphone. A ‘media driven’ fracas, cried one, on the growing calls for a referendum to repeal the Eight Amendment.

“I’m for the retention of the Eight Amendment, because the groundswell of the people of Ireland is pro-life and I think this is media driven to have a referendum,” he said. “You can see in Europe and Germany now, the birth rate has gone down so they’re kind of a dying race because of abortion and contraception. “Thou shalt not kill,” he reminded the audience.

Another: “I’d like to say that pro-choice is a lie, a huge lie. The unborn children have no choice, only to face the world’s rejection by dying an excruciating death without any painkillers. And there innocent bodies being dismembered and their skulls bring crushed. The horrors and brutality of abortion can never be overstated.”

“Can we hear from a women?” asked Vincent. One lady, who identified herself as a Sinn Féin supporter, stood up. “It’s not about the bishops and the priests, it’s about women’s choice. I worked for many years in the periphery of Heathrow Airport, in a very large hospital, where woman daily hopped off a plane at Heathrow and came to the hospital I was working in for terminations.”

“That was their choice,” he said.

“My role as a nurse was to respect these women’s choices, and this is why in 2016 we need a government to change the Eight Amendment in order that woman have the right to choose themselves and not be dominated by the church.”

As for the present candidates on the stage, Minister Sherlock outlined Labour’s pledge to repeal the Eight. Others, including AAA’s Ciara Lombardi Roche and the Social Democrats’ Ken Curtain, were also in favour of repealing the Eight. Independent candidate Kieran McCarthy announced he is ‘strongly in favour but I’d also call myself pro-life’.

Fianna Fáil’s Barbara Ahern thought it a strange question to ask without knowing what would replace the Eight, Paul Bradford from Renua said he is against repealing the Eight, while Kevin O’Keeffe said he is ‘happy’ to keep the Eight amendment.

Before the debate wrapped itself up, each of the candidates did their best to slip in a ‘why you should vote for me’ line or two. Vincent again squared himself up to Fianna Fáil and, to Barbara Ahern, he asked: “You’re representing the party who caused all this misery, why should people vote for Fianna Fáil again?” Ms Ahern refused to take the bait, and said she didn’t accept that accusation, citing the meltdown in the global economy as the driving factor in Ireland’s recession.

“Our meltdown was far greater than the global meltdown, thanks to Fianna Fáil. Whatever was done globally, Fianna Fáil did better,” countered Vincent to laughter. “Why should people vote for Fianna Fáil given the damage they have done to society?” he asked once more.

“Because they’re not liars or robbers!” shouted a man with arms folded from the audience.”