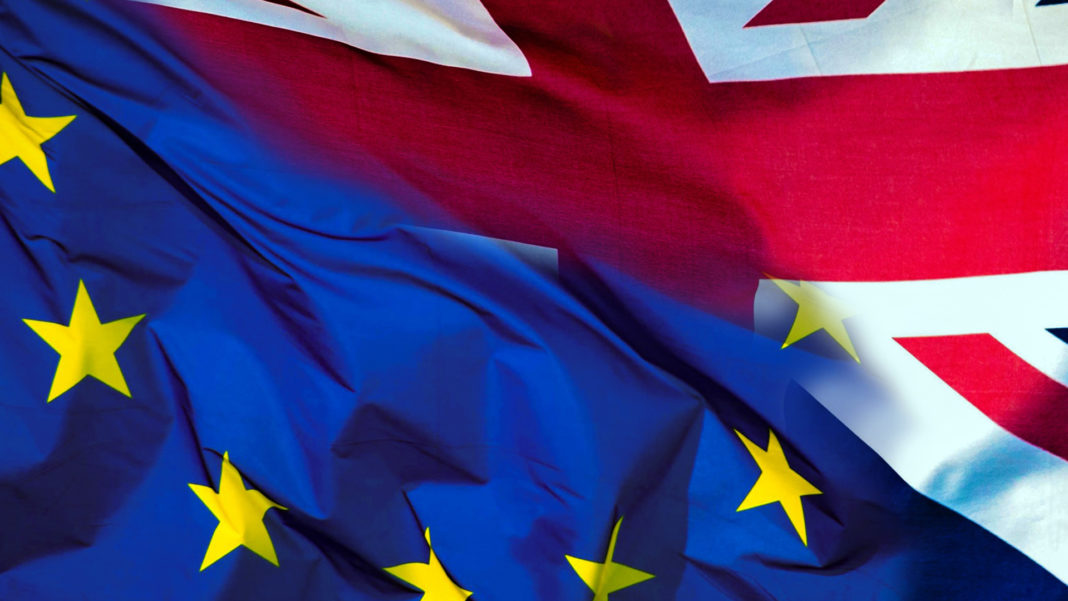 It’s a cold, damp morning in London, and the Palace of Westminster is festooned in scaffolding. At the gates stand seven hardy Brexit supporters, most of them of retirement age, all holding aloft what appear to be homemade placards.

When I introduce myself as being Irish, they seem delighted. “We love the Irish,” a tall man in a cloth cap says. “Where would Cheltenham be without the Irish?”

I’m tempted to reply Cheltenham, but he follows up by asking: “And where would any of us be without Guinness?” Well, I’d be two stone lighter, but he’s on a roll now. And have the Irish woken up to the EU threat yet, he asks. According to most polls, about 90% of us haven’t, no, I say, and it seems only far-right, ultra-conservative Catholic fundamentalists want out of Europe. A terrible shame, he says. He introduces himself as Mark Orr.

“Do you know your biggest problem in Ireland?” Mark asks. “You have a gentleman who has adopted Ireland, and he is far fonder of the EU than he is of Ireland.”

I ask if he means the Taoiseach, and then, in the spirit of being a good neighbour and a gracious guest, I say Leo Varadkar.

“Exactly so,” Mark says. “He’s an immigrant from India, and he’s adopted your country, but his loyalty is to the EU.”

I reply, perhaps a bit more sharply than I mean to, that while I mightn’t share Leo Varadkar’s politics, he’s every bit as Irish as I am.

“No, he’s not!” says another demonstrator, in a “Don’t be silly” voice. She’s a small woman, and she’s carrying a NO MEANS NO placard. “Verruca isn’t Irish! He’s an Indian. No loyalty at all.”

I counter that he’s Irish, born and raised, and his mother is from Dungarvan, not 35 miles from my hometown. I also tell her – admittedly more in hope than in certainty – that even if he were an immigrant, the vast majority of Irish people wouldn’t have a problem with that.

“Well he’s not proper Irish,” she says, as though that’s the end of the matter.

(On Twitter, later, someone will retort “I wish my Irish was as fluent as Leo’s.”)

The woman gives her name as Hazel Prowse, “A distant cousin of Dave Prowse from Star Wars”. I ask what Darth Vader would make of Brexit, and she says, without irony, that he’d be all for it.

Mark says it really is very simple. We want to leave the EU, he says. You Irish wanted to leave us in the 1920s, and there was no back-stop then, or any of that sort of carry-on.

(Mark has, presumably, never heard of the Black and Tans, Bloody Sunday, the Burning of Cork, the Border Commission, or any of that sort of carry-on.)

Idiot that I am, I try to explain why we are so concerned at the prospect of a hard British border on the island of Ireland (I fancy they look at me incredulously at that, and I silently thank comedian Andrew Maxwell for framing the problem that way) and I tell them customs posts will become targets for terrorist attack. I tell them the first fatality of the Troubles was at a customs post. I also add that Mrs May’s voting against the deal she herself negotiated, confirms for many Irish people their deepest-held suspicions that the British simply cannot be trusted.

“Look,” says Mark, “They’ve had 20 years of peace (in Ireland). You’ve got to give them the benefit of 20 years. They won’t go back to that. Nobody goes back to terrorism after 20 years.

“And besides, the atrocities helped clear the air. I mean, they were terrible, the atrocities, but they’ve given them time to reflect. At least they got it out of their system.”

I’m literally speechless at that, when Dave Prowse’s cousin joins in again. Bring back the Belfast shipyards, she shouts.

“You want to get back to building ships again. Harland and Wolff used to build such great ships.”

Another Brexiteer, who doesn’t give his name, says, deadpan: “Yeah, the Titanic was brilliant.” He then offers his opinion on a border in Ireland.

“Maybe you need a border in Ireland. Stop some of them things getting through.”

He then says the EU is all about false hope and false money. It’s not real money, he says. It’s only paper money. When I ask isn’t all money paper money, he moves away.

Hazel says electronic borders work perfectly well: “There’s all this technology now. And I’d know. I used to work in the European Space Agency, before the politicians got involved and ruined it.” She cites something called Fleet Operation Recognition System as the solution.

I ask Mark about news reports of possible job losses at Nissan’s Sunderland plant, due to Brexit uncertainties. Before he can answer, Hazel interjects.

“Good riddance!” she says. “Do you know, I simply cannot stand the Japanese. An untrustworthy race. Worse than the Germans.”

Mark looks a bit alarmed and tries to take back control of the conversational reins. As he does, Hazel says: “We should nationalise Nissan and have done with it!” A passing lorry honks, and the Brexiteers all wave their placards.

Asked about the prospect of the UK crashing out of the EU without a deal, Mark says it can’t happen soon enough.

“We don’t need a deal. We have more patents in the UK than there are in the whole of the EU. We’ll do very nicely outside the EU, thank you very much.”

“The solution is very simple,” Hazel says. “We’re playing football with the Germans and the French, but we can play cricket with the Pakistanis and the Australians.”

How right you are, I say.

“Look, it’s only about 300 jobs in Sunderland. There’s far too much scaremongering about jobs and recessions,” Mark says. “And do you know something? Perhaps a recession might not be the worst price to pay for freedom.” He motions to the statue across the road. “Do you see that gentleman over there?” Winston Churchill. Here we go, I think.

“That gentleman over there told us to stand firm at a time when we were hopelessly outgunned.”

(At this point Mark rattles off statistics about Spitfires and Hurricanes and Messerschmitts and Dorniers, and I tell him I simply cannot take notes fast enough. He says it’s good that I do things the old-fashioned way, and then he returns to the glorying of Mister Churchill, a man who took a principled stand against Hitler long before it was fashionable or profitable in the UK, but also a man some English people never seem to remember presided over a famine which in 1943 cost three million lives in India, if you really do want to bang on about India all that much.)

“He stirred up our resolve, that gentleman did, and we stood our ground. We won a war against overwhelming odds, when we were told we couldn’t win.

I’m inclined to say, look at you now indeed, when Hazel cuts across us again.

I tell her I’ll do my best to relay her message.

With that, Mark rounds up the troops and they head away to “the caff” for refreshments.

“They never hang around too long, that lot,” says Steve Bray. “And they’re never any loss.” Steve is a Remain supporter, known as Mr Stop Brexit, and he’s a regular sight outside Parliament, in his blue STOP BREXIT top hat and his EU flag-inspired cape.

Steve is from Port Talbot in Wales, an area he describes as deprived, and one which he says has benefitted hugely from EU funding: “We’ve just got a new train station, thanks to EU funding.”

A council worker, pushing his cart, stops to give Steve a fist bump.

“Keep up the good work, mate,” he tells Steve with a warm smile, and Steve says “You too”.

With a gleam of pure mischief, Steve says he has founded a political movement, Stand Of Defiance European Movement, for short, SOD’EM.

A man in his 30s, who gives his name as Richard, approaches Steve and asks to shake his hand. “I’ve lost my job,” he says, “and I want you to know you give me hope. You’re an inspiration.” Steve looks humbled.

Brexiteers talk about Project Fear, Steve says, but Remain is all about hope. In the end, it all comes down to imagination, and generosity.

“I’m Welsh, I’m British, and I’m European, and I’m proud. Each one of those identities makes me richer, rather than poorer. We’re stronger together. That’s what that lot will never understand.”

Steve thinks Article 50 will be extended, although he says he would prefer it was revoked. He feels reality will have to set in for the British Government sooner or later. He’s hopeful the UK will never leave the EU. The worse it gets for Brexit, he says, the better it is for Remain. If the EU can hold its nerve, we’ll be okay, he says. The EU has to stand by Ireland.

It’s five in the evening now, and I’m in a taxi heading from Dublin Airport into the city.

Traffic is heavy in the rain, and I’m listening to the RTÉ News on the radio. Theresa May is mentioned, of course. Switching off the radio, the taxi-driver asks what I make of Brexit. Thinking, foolishly, that he’s interested in my opinion, I start to tell him about my experience earlier today. He cuts across me to ask if I know who’s an appsalute disgrace in this country.

I confess I take a certain pleasure in giving him both barrels.