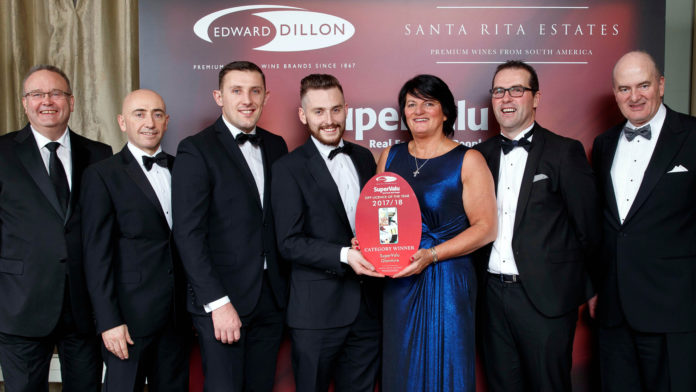 The 25th annual Edward Dillon & Santa Rita Estates SuperValu Off Licence of the Year Awards which took place last Thursday, November 23 in The Newpark Hotel Kilkenny with Ryan’s SuperValu in Glanmire winning the Large Store of the year award.

Noel O’Riordan, Lilian Twomey and Ross Heelan were there on the night to represent SuperValu Glanmire and were presented with their award by Andy O’Hara, CEO of Edward Dillon, Donagh McClafferty, Category Manager at Musgrave Retail Partners Ireland and Tom Gaskin, Santa Rita Estates.

Each of the finalist stores were judged by Rodney Trenwith and were marked on a range of criteria including overall appearance, innovation and customer service.

The winners of the Edward Dillon & Santa Rita Estates SuperValu Off Licence of the Year Awards will enjoy a fantastic trip to Spain visiting Rioja, Barcelona and Sitges. All finalists received a certificate of achievement on the night.

Speaking at the event, Andy O’Hara, CEO of Edward Dillion, said: “We would like to congratulate the winners of this year’s Off Licence awards for taking part and achieving a high standard in their stores, and also to each of the finalists for taking part this year.”