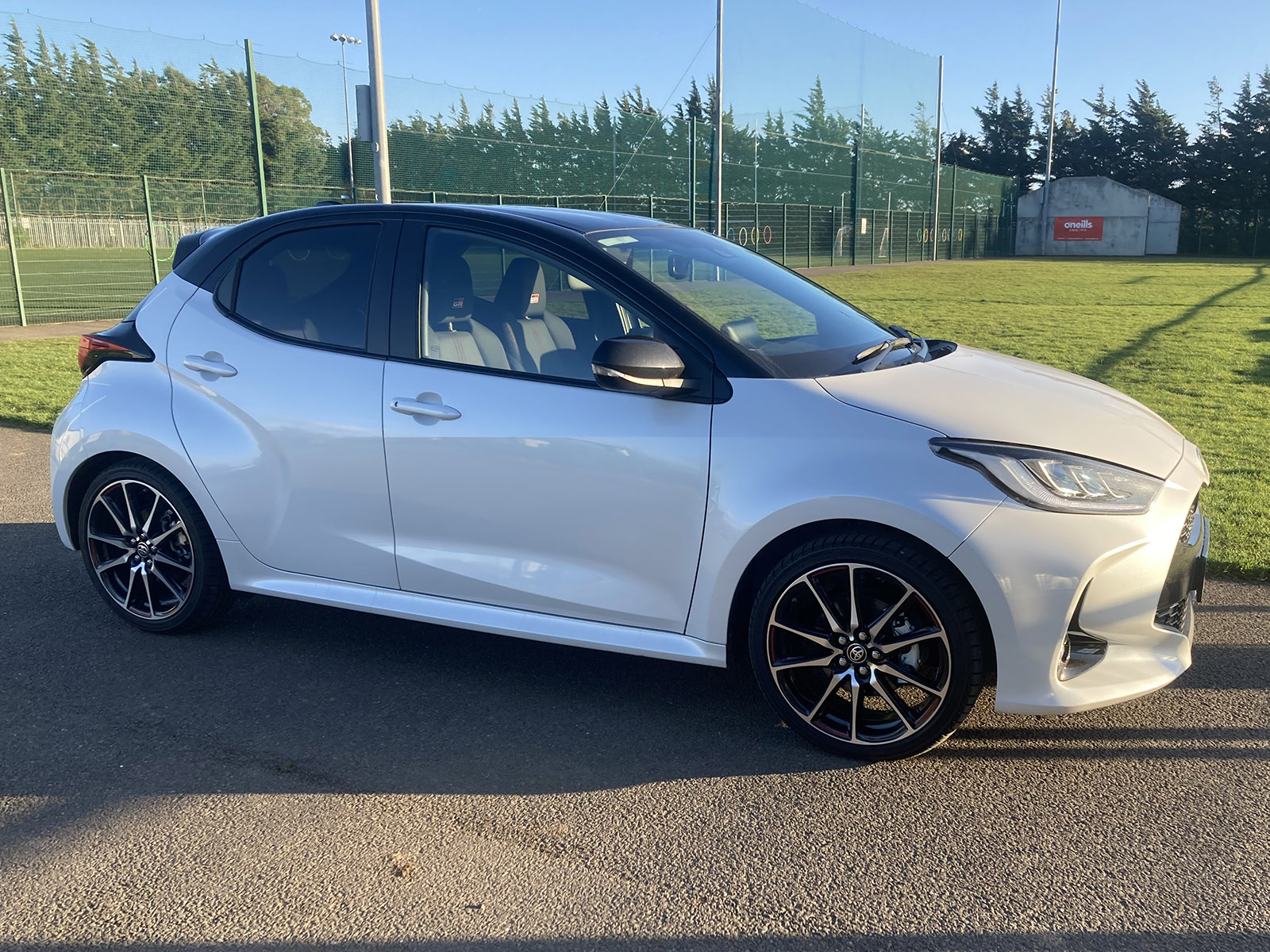 I was due to drive a regular Toyota Yaris a few weeks back, but the car was not available at that time. So, I was then booked in for the GR Sport version last week and it was certainly worth the wait.

This fourth generation Yaris has been around for a while, so it’s not exactly new, but it was new to this driver. The Yaris has long been a favourite of Irish customers and Toyota say that it’s a model which has enjoyed sustained popularity and a reputation for consistent innovation.

Straight away I was impressed with the attractive looking Pearl White car with a black roof and a neat touch of red at the rear end.

The Yaris was launched in 1999, when it replaced the Starlet. It has been a great seller for Toyota since then. And if you are interested in names, I’m told that the name ‘Yaris’ is derived from ‘Charis’, which is the singular form of Charities, the Greek Goddesses of charm and beauty.

In 2019, the Yaris accounted for more than 20% of Toyota’s sales in Europe. The latest generation is manufactured in Valenciennes in northern France. It’s the first compact car to be built on the Toyota New Global Architecture.

Having driven several plug-in hybrids and fully electric cars this year, it was a pleasure to get back into a regular petrol car and not to have any range anxiety and/or worries about charging.

White on the outside, but inside black was the dominant colour. However, a touch of red stitching on the seats gives the interior décor a much-needed lift.

GR means Gazoo Racing, the motorsport brand of Toyota. And it sure is lively. My test model was a 1.5-litre version. The black 17” cast alloy wheels are exclusive to the GR Sport.

The automatic four-door version I drove was a GR version, not the two-door Hot Hatch that you may have seen. It’s certainly not as thirsty as a Hot Hatch, which will cost out around €65k.

The dash is well laid out and as usual with most modern cars, it’s dominated by the infotainment screen which works very well. There was a time when Toyota cars were not compatible with Apple iPhones, but thankfully that day is gone.

There is ample room for two people in the back, maybe three at a squeeze. The boot for a supermini is naturally fairly small and no spare wheel is provided. Indeed, with the hybrid equipment located in the boot, there is no ‘well’ for a spare wheel. But if you feel re-assured when driving with a proper spare wheel and not a repair kit, you can simply just carry a spare wheel in the boot.

The GR Sport is a five-door and is available with Yaris’ standard 1.5-litre self-charging hybrid powertrain. It may look small from a distance, but I had no complaints from my regular passengers, who told me that they liked the internal and external design.

Also, for Yaris fans there is now a Yaris Cross version available, with prices starting at around €28k.

February 2, 2023 0
Mitchelstown Library will host an exhibition of contemporary photography of the war in Ukraine for the month of February, with the official opening of...