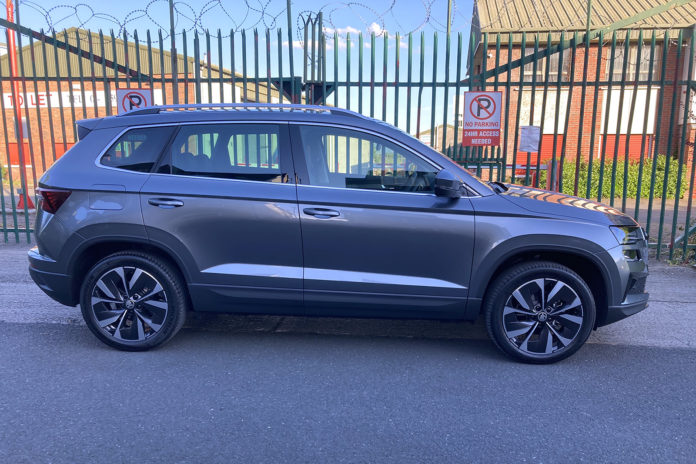 After many weeks of driving automatic and electric cars, last week it was back to basics in the revamped Skoda Karoq which was a 1.0 litre manual version.

At first glance you might think that a 1.0-litre petrol engine wouldn’t be powerful enough for such a big car, but no problems with power.

Now I have a theory about manual gear boxes. While I love automatics, I think that driving a car with a manual five or six-speed gearbox tends to keep you more alert at the wheel. In an automatic or electric car, you simply put your foot on the accelerator and off you go, but in manual cars I find that I am more aware of my surroundings as I work through the gears.

There seemed to be universal approval for the funky-looking Yeti that Skoda launched in 2009, but in 2017 Skoda replaced the Yeti with the Karoq which to be fair to the Czech company, has been a great seller.

The Yeti arrived in the midst of the first recession of this century when motorists wanted a durable car that provided value for money. One critic said that it was an ‘abominable decision’ by Skoda to get rid of the Yeti!

The Karoq could be described as a compact version of  Skoda’s Kodiaq which comes with five and seven seats options. The Karoq only has only five seats.

In the past five years, Skoda has sold over 5,0000 versions of their Karoq in Ireland. The good old reliable Octavia is still Skoda’s best seller.

Now the Karoq has got a mid-life upgrade. The new design features a wider, now hexagonal grille, restyled front and rear aprons, as well as slimmer and sharper LED headlights and taillights.

The daytime running lights are now split in two, and for the first time, the Karoq can be equipped with full-LED Matrix headlights which are standard on Style and Sportline models.

John Donegan, Director of Skoda Ireland said: “When we launched the Karoq in Ireland in 2017, we stepped up the pace of our SUV campaign. The model has become a real success story and has contributed significantly to the fact that SUVs now account for 45% of total sales.”

The Karoq is gorgeous, and I liked a lot of the simple things you get with a Skoda. The infotainment screen was well laid out and easy to use. As usual with Skoda you get a clip on the windscreen to hold your parking ticket, the ones you pay for.

On the dash you are told what direction you are travelling in, useful if lost in the countryside and there is a full-size spare wheel, which we Irish love. When leaving the car, a notice comes up on the screen asking you to check if you have left any items in the car. But sadly, the days of a complimentary umbrella seem to be gone.

I loved the radio which was really easy to use. Also, the radio tells you the name of the song or piece of music being played. A great service especially when listening to Lyric FM. The radio volume is controlled via a button on the steering wheel.

Prices start at €33,750 for the Ambition model. My test car was the Style version which had a few extras that brought the price up to €38,450.

Skoda has really blossomed since being bought by VW in 1991 and they are now producing cars just as good as VW.

“You’re playing with your emotions and the guilt overcomes you a little bit as well but I always had in the back of my...

August 7, 2022 0
Early stage founders who have been taking part in a successful start-up programme at Republic of Work will showcase at an event on Thursday,...