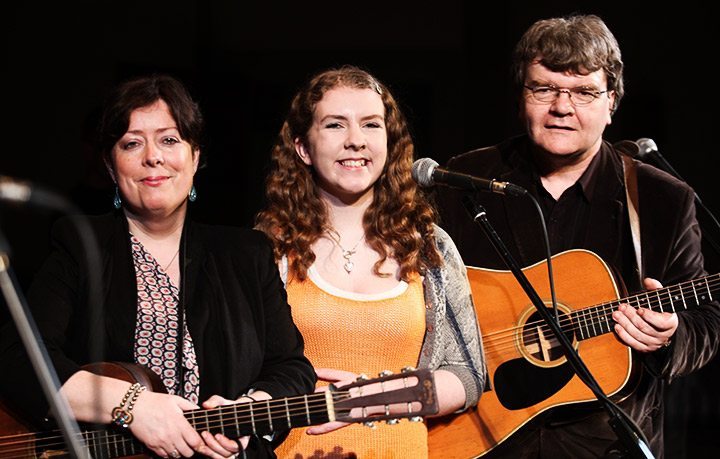 The names of Noel Shine and Mary Greene are well respected in the folk and ballad world be it as individual artistes or as a duo.

In more recent time, Noel and Mary have been joined by their daughter Ellie who brings a new dimension to their act making them the 3-piece Greenshine.

Greenshine’s music straddles the boundaries of contemporary, folk and roots and includes many self-penned songs, many of which have been picked up and recorded by other artists. Their fast picking and close harmonies are a treat to the ear.

Noel is a multi-instrumentalist, turning his hand to guitar, bass, mandolin, bouzouki and traditional whistle. This musical dexterity has seen him much in demand as a session and band player by artists as diverse as The Clancy Bros and Tommy Makem and funk and soul legends, The Republic of Loose amongst many others.

Mary brings rhythm guitar to the mix and her voice is a wonderfully versatile instrument. She is in much demand for her recording session work and has added her talents to the albums of Christy Moore, John Spillane, Mick Hanly and Frances Black as well as cult psychedelic outfit Dr Strangely Strange.

Ellie Shine has grown up around music and has been performing since age 13. Her list of performances include one at The Abbey Theatre for President Michael D Higgins and his wife Sabina.

Accompanying herself on the ukelele with songs of all genres, she has a special place in her heart for classic Beatles and country as well a good contemporary songwriting.