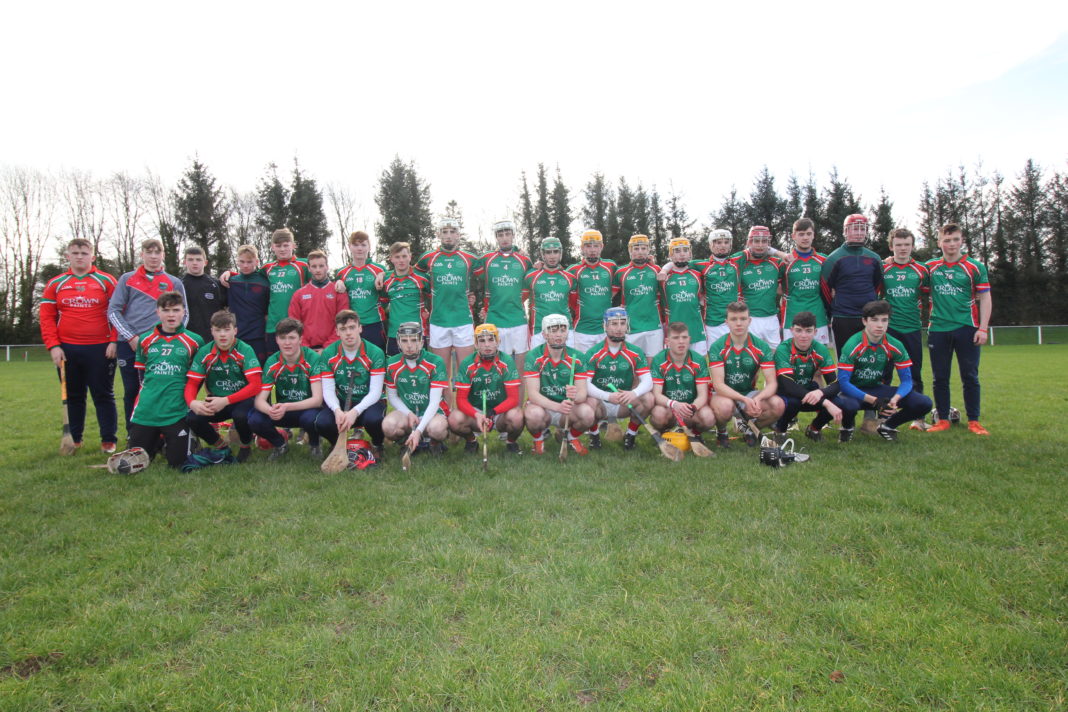 Two early goals in quick succession proved very decisive as Mitchelstown CBS held on for a deserved victory over Glanmire Community College in the Munster Senior B hurling semi-final in Cappoquin on Saturday last.

Glanmire drew first blood – a free in the opening minutes from their midfielder, who was to prove unerring in his many free-taking opportunities through the game. Cathail O’Mahony replied from play with a fine score from the right side of the field. Shortly afterwards James Keating showed his strength and skill – an excellent catch, brushing off the attentions of the fullback and unleashing a shot to the back of the net to put CBS ahead 1-01 to 0-01.

Within minutes good work by Oisín Brennan set James Keating up again. On this occasion he was blocked, but had the presence of mind to kick the ball over the defender to Tomas Vaughan, and the corner forward drove the ball to the back of the net.

A free from distance was superbly fielded by Cathail O’Mahony, and he turned to add his second score from play. This was followed soon after by a James Keating free following a foul on Tomas Vaughan, and with just 10 minutes gone CBS were in a commanding position, leading 2-03 to 0-02. The two sides exchanged points, a James Keating free for Mitchelstown and a point from play for Glanmire.

Things could have been worse for Glanmire – a long free goalwards was deflected to the net but was disallowed as a square ball. In this early period of dominance, it was notable that Mark Keane and John Hunter in particular were well on top, and frequently had the time to pick out good passes.

To their credit, Glanmire did not capitulate and they scored the next three points – all from frees. With the Mitchelstown lead now down to 4 points, Glanmire had a goal opportunity but were denied through excellent defending by Jack Lewis. Superb fielding by Mark Keane prevented Glanmire building on their momentum. As the half drew to a close Glanmire were awarded another free and from it scored their 7th point. This meant that over 15 minutes had elapsed without CBS scoring, and the momentum had definitely swung Glanmire’s way.

Mitchelstown rallied to get the final score of the half however. An excellent catch by James Keating laid the groundwork, and the finish was supplied by Darragh Flynn with a well-taken point from the left sideline. Mitchelstown led by 4 at half-time, 2-05 to 0-07.

Mitchelstown made some positional and personnel changes at half-time, but Glanmire were first on the scoreboard again – yet another free. The lead was now down to 3. A superb catch by John Hunter lifted Mitchelstown CBS, and shortly afterwards a free from Darragh Flynn made it 2-06 to 0-08. The same player was on target from the placed ball again within minutes following a foul on Mark Keane, now operating at full forward. Good work by team captain Cathal Harrington set up Christy O’Sullivan for a well taken point to extend the lead to 6 before Glanmire replied from a free.

The work rate from Mitchelstown players was commendable. It was typified by corner-forward Tomás Vaughan. His hassling and harrying meant Glanmire defenders could not afford to dwell on the ball. It was a feature of the entire team, and was key to Mitchelstown’s ability to withstand any Glanmire comeback effort. Lorcan Finn was tireless in midfield, and had the unenviable task of marking Glanmire’s strongest player on the day.

Cathail O’Mahony was more involved in the game in the second half, and did well to add his own third point from play. The momentum Glanmire had in the latter parts of the first half seemed to have been well dealt with by Mitchelstown. As if to emphasise this, Cathal Harrington added an excellent point from play, the product of strong running by the same player and set up by great work by Kevin Noonan and John Hunter. CBS now led by 7 points. Glanmire added a point from a free and then a point from play – just their second score from play in the game.

Time was not on their side but they gave of their best in the search of the goal that would re-ignite their challenge. Superb fielding by James Keating as the ball dropped in from distance epitomised the resolve of the Mitchelstown defence. It appeared that Glanmire would not be able to breach the CBS rearguard from play. Their reward for their resilience came via the familiar route – a free from outside the 20 metre line was rifled to the roof of the net. It was too little too late, and the final whistle soon afterwards signalled Mitchelstown’s progression to the Munster Senior B final on a scoreline of 2-10 to 1-11.

THROUGH TO MUNSTER SENIOR B FINAL

This will be the second occasion in three years that Mitchelstown CBS will participate in the Munster Senior B decider. Tipperary will again provide the opposition, this time Cashel Community School, with the final provisionally fixed for February 17th. Focus for Mitchelstown will now be on the Munster senior B football semi-final this Saturday, when they face near neighbours St Colman’s Fermoy, in a local derby.