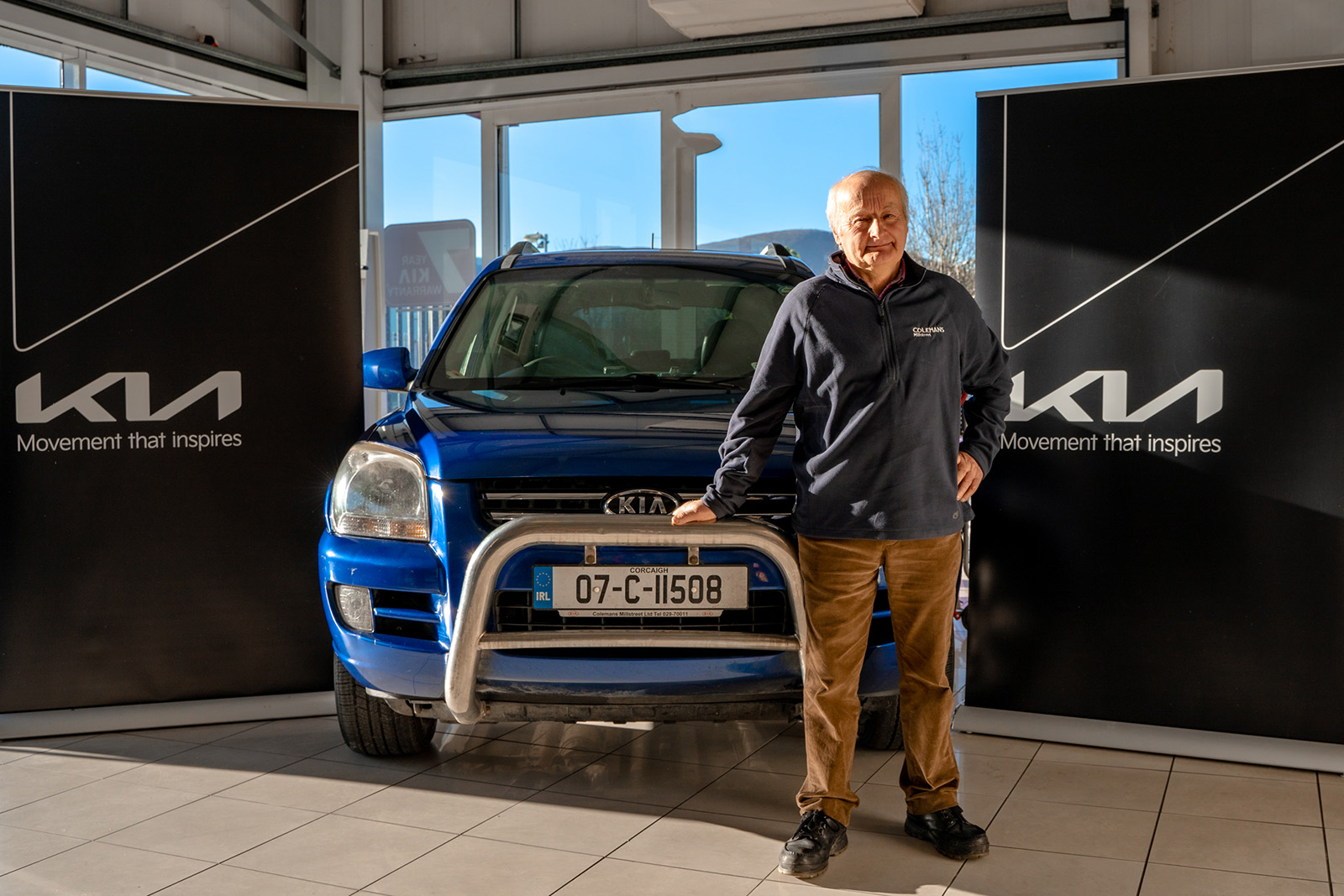 On a cold winter’s morning in Millstreet County Cork, Ben O’Connor begins his working day as he has done every day since March 2007, by turning the key of his trusty Kia Sportage. Ben, Sales Manager for New Holland Tractors at Colemans of Millstreet has accumulated a phenomenal 1,010,359 kilometres in his Kia Sportage 2.0 Diesel GSE 4×4 which was registered as a brand-new company car for him sixteen  years ago from Colemans adjoining Kia dealership.

Despite the high mileage, Ben has no intention of parting with his beloved Sportage which has been a constant source of reliability to him over the years. Regular servicing and maintenance have been attributed to the smooth performance of this vehicle which is still running on its original engine. Ben, who has been selling New Holland tractors with Colemans since 1973 commented “I’m known as the man who sells the Blue Tractors and drives the Blue Sportage. The car has become part of my identity and I wouldn’t be without it”. Ben’s commute mostly consists of short journeys to customers in the county of Cork, but he does on occasion travel to customers in Kerry and Limerick also. As Ben’s customers are farmers that generally live in rural areas, Ben often finds himself traveling on poor roads and laneways around the region. Despite his challenging daily commute, Ben added “the tracking has never had to be reset on the car. It has never broken down and the only major works required to the car was to receive a new clutch “.

With just 6 digits on the odometer Ben and the team at Colemans Kia were curious as to what would happen at the million kilometre mark .Ben takes up the story .”I knew I was getting close to the million mark, I looked down and I realised that I was closer than I thought! I just about managed to get back to Colemans in Millstreet to record the milestone. I didn’t know what to expect as I could see that there were only 6 digits on the clock. Once the clock turned 999,999kms and I had driven a few more kilometres I realised that it would go no more.” He adds with a smile ” My driving had beaten the odometer, not many people around the world can say that”. The trip computer now calculates his excess mileage, but Ben has no intention of stopping yet. “I’m just interested to see how far I can go from here” he concluded.

Keeping the car serviced and maintained was the responsibility of Patrick Coleman and his father John, Dealer Principals at Colemans Kia in Millstreet. The Coleman family are heavily involved in the local community, both from a business and sporting perspective. Not only do Colemans own and run both Kia and New Holland dealerships in Millstreet, but the family also run the Centra shop beside the garage. The family also have strong sporting roots in the community with John Coleman representing Cork Gaelic footballers throughout the 1970’s and winning an All-Ireland in 1973.

Interestingly, John also represented both Munster and Ireland in Rugby which is an achievement not yet matched by any Gaelic footballer to this day. John’s older brother, Billy Coleman was one of Irelands greatest ever Rally Drivers and won prestigious events in the 1970’s and 1980’s including the British Rally Championship and Irish Tarmac Rally Championship title, he was also inducted into the RTÉ Sports Hall of Fame in 2006. John’s son Patrick is keeping this strong sporting tradition going with his heavy involvement and support for the local Millstreet GAA club.

John Coleman is justifiably proud of the longevity of the car. “Ben spends so much time on the road that he is like a brand ambassador for our business. Many of our customers would travel 10,000kms or 15,000kms a year but Ben averages 65,000kms and is on the road meeting customers every day.  Most drivers wouldn’t reach one million kilometres in their lifetime and yet Ben has surpassed that in just fifteen years. He has clocked up more mileage at this stage than Billy would have throughout his motorsport career”.

Speaking about the maintenance of the car, Patrick Coleman added “The secret to keeping his car on the road so long is not a mystery, it’s just down to routine maintenance and servicing. In line with manufacturer guidelines, we ensured the car was serviced every 15,000km and that the timing belt was changed every 150,000kms. We replaced the battery twice and replaced one starter also. We ensured that the tyres were always healthy (changed every 50,000kms) and made some cosmetic updates when required such as changing the pedal rubbers and the gearshift cap, apart from that the car has all its original components. Overall, the cabin materials remain in fantastic condition which is testament to the build quality of this car. “ To see the full story of Ben and his Sportage, you can view this short video here.

February 2, 2023 0
Mitchelstown Library will host an exhibition of contemporary photography of the war in Ukraine for the month of February, with the official opening of...