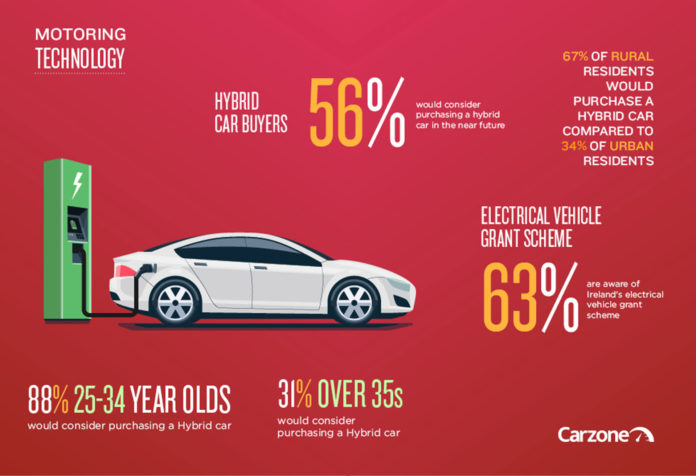 1 in 2 people in Ireland change their car every five years according to the latest Motoring Report from car buying experts Carzone.

The bi-annual index which examines trends in the Irish motoring market, highlights the continued rise in used car sales in Ireland as people upgrade their car more regularly. When changing their car, 47% tend to stick with the same marque indicating that brand loyalty remains high among Irish drivers.

The Carzone Motoring Report is compiled by analysing data from the 67 million searches carried out on Carzone in the first five months of 2017, as well as an in-depth survey of 2,647 Irish motorists and a cross section of car retailers in Ireland.

Insurance was named as the main financial concern for motorists once again with a resounding 88% saying they noticed a rise in their insurance premium in the last year. Fuel was the second biggest concern followed by road tax and costs associated with the NCT.

In line with changing trends in motoring, Carzone questioned respondents on their attitudes to car technology. Over two thirds (69%) say that a car’s technology plays an important role in their purchasing decision. However, it seems it has a bigger influence over men than women. Over 3 in 4 men polled say that car tech is very important when buying a car compared to just under half of women (43%). Its importance also carries more weight with the 25-34 age group with 91% citing it as a very important factor.

Two thirds (65%) believe that in-car technology has made them a better driver and 70% say it makes driving more enjoyable. When it comes to must-have tech, 47% say they can’t live without their trusty GPS and a quarter can’t do without a Bluetooth handsfree kit.

Although we can’t live without GPS, parking sensors are the most used tech item among motorists with 65% relying on sensors for perfect parking. Cruise control is second (61%) followed by a handsfree kit (37%).

As technology now plays an important role when selecting a vehicle, Carzone also asked what technology consumers expect now as standard. A significant 85% say that they would expect to find a Bluetooth handsfree kit as standard while 41% expect car sensors and a third (34%) cruise control.

Indicating that Irish motorists are embracing technology, over half (56%) say they would happily be a passenger in a self-driving car and just under 3 in 4 (73%) believe that autonomous driving will happen in their lifetime.

Interestingly the biggest reservation noted by consumers was the fear of the car being hacked externally (41%), 27% of motorists biggest concern for self-driving cars is not being in control of the wheel themselves and 1 in 5 say they worry about a tech malfunction.

New to this year’s report, Carzone questioned a cross-section of car retailers around Ireland on their views on the motor industry. Given that motorists are embracing technology, it’s no surprise that 85% of dealerships are investing in this area to enhance the overall customer experience. Wi-Fi in dealerships, 360 video and interactive tablets are the three key areas that car retailers plan to invest in during the next year.

The Volkswagen Golf remains the most searched for model on Carzone. However, jumping a massive six places to second place in this year’s report is the new-shape Mercedes-Benz E Class. Premium car marques remain a firm favourite with Irish motorists with the BMW 5 Series, the Audi A6 and the Audi A4 all featuring in the top 6.

Although electric and hybrid cars make up a smaller portion of searches on the site, interest in these cars has significantly increased in the first five months of 2017. The Nissan Leaf is the most searched for electric car on Carzone while the Toyota Auris takes the top spot in the hybrid stakes.

“The aim of the Carzone Motoring Report is to examine trends happening in the Irish motoring industry. This is the eighth edition of the report and this time around we delved into a number of new topics such as technology in line with the changing face of the industry.

Rising insurance premiums remain a key concern for drivers with 88% seeing the cost of their policy increase in the last year. However, the overall outlook for the industry is positive with consumers now changing their car more frequently and premium car marques are some of the most sought after vehicles by drivers.

The subject of technology was one which revealed some interesting insights with in-car technology now an expectation rather than an added-bonus; especially among younger age groups. Dealerships across the country are also continuing to invest in this area to enhance their offering and connect with this new tech savvy audience.”

To access a full copy of the report, visit: http://www.carzone.ie/report/