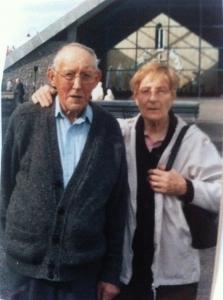 It was a hard Christmas for the O’Farrells of Ardglare, Mitchelstown, as they tried to come to terms with the unexpected deaths of both of their parents within 24 hours of each other.

Sean and Nellie O’Farrell would have been married 45 years on January 8 , sadly on December 22, Nellie passed away in Corpus Christi Nursing Home and just a day later, her husband Sean unexpectedly passed away after her removal when he was at their daughter Siobhan’s house.

They are survived by their three daughters, Helen (Coughlan), Siobhan (Barry) and Maureen (O’Brien) and their husbands, their seven grandchildren and extended family members.

Fr Fitzgerald celebrated Mass for both funerals and concelebrated by Monsignor Michael Crotty who is a neighbour of the family and Monsignor Denis Reidy who is a cousin of Nellie’s.

Fr Fitzgerald told The Avondhu that they were both very large funerals and that the support from neighbours and people in the community helped to lessen their grief somewhat, but that it was very hard on the three daughters to lose their parents in such a way.

The family would be very close, as Siobhan and Maureen both live next to the family home and Helen lives on the Kildorrery road. They would have spoken to each other a few times every day on the phone and would see each other regularly.

Nellie and Sean both adored their one grandson and six granddaughters and it is the closeness of the family and support from those around them which will help them through this difficult time.

Nellie who was 78 had been in Corpus Christi for a year and a half, while Sean who was 88 was very active and right up to his death, he would have done a lot of work on his daughter’s houses and he was completely independent.

His death was so sudden that it was described as being like a candle which blew out, but he didn’t suffer and in a way, his passing was almost easier to bear because it meant that he didn’t have to face a life without his wife.

Is energy storage with artificial intelligence the future of increasing renewable energy from solar farms?