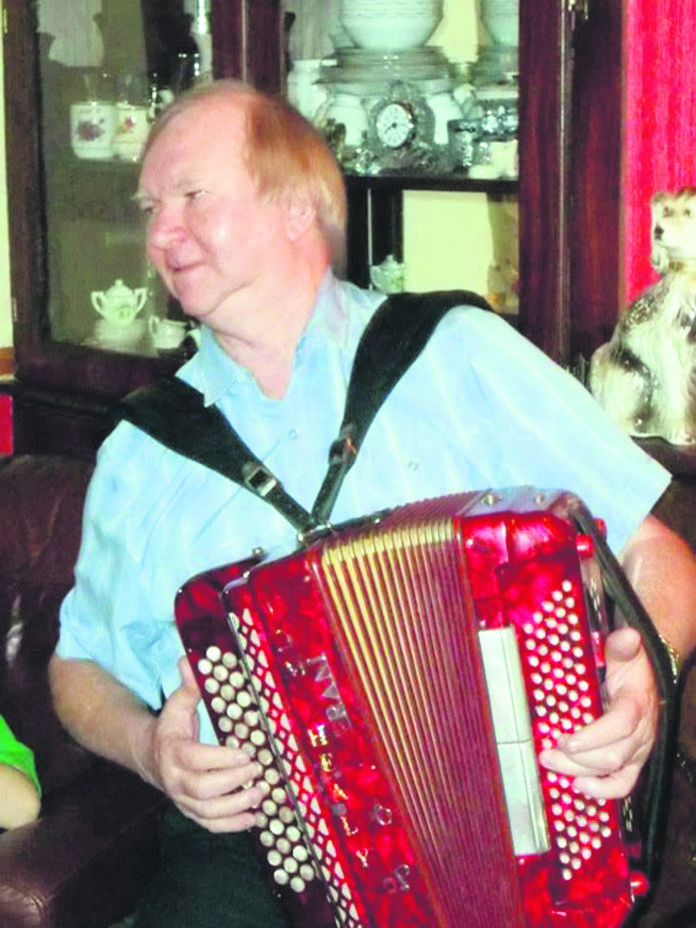 To many of us, he may have been just ‘Tom Healy from Leitrim’ or ‘Tom Healy the musician’, but to the many people who travelled from all over the country and from London to pay their respects and show their appreciation, he was someone who had a special place in their hearts as a gentle and kind person, a true friend and a great entertainer.

His death on Sunday, January 19 while not unexpected, was received with great sadness by all who had the pleasure of knowing him.

It was no great surprise that Tom Healy as a young man, would eventually take to the music business having come from a house that was steeped in music.

Tom’s dad played the accordion and his mam had a beautiful singing voice, so Tom and his brother Pat had a good education in that regard.

Tom’s own accordion was brought to the altar by his only nephew Patrick Healy, along with other mementos of life including an LP of his first recording, a miniature accordion, his camera, a family portrait and The Irish Post newspaper through which he regularly kept in touch with the music scene in England, of which he had been such a big part for many years.

The readings were read by Peter Bonehill and Mary Beirne, the Responsorial Psalm (‘On Eagle’s Wings’) was sung by Art Supple as was the Offertory Hymn (‘I Watch The Sunrise’) while Mary O’Brien and Liz McCarthy took part in the Offertory Procession.

The Communion Hymns were sung by Trudy Lalor (‘Here I Am Lord’ and ‘How Great Thou Art’) and Tom’s daughter Sinead who gave a very moving but beautiful rendition of ‘When The Rain Comes’.

Tom’s wife Eileen recited a poem that included the words “God saw you getting tired / And a cure was not to be / So he put His arms around you / And whispered ‘Come to me’.”

In her eulogy, another associate of Tom’s, Mary Darcy (originally of Two’s Company), paid a moving and fitting tribute to Tom and spoke of their 50 years of friendship that she will forever treasure. The love and happiness that Tom gave to so many people through his music was immense, she said, and spoke of his willingness to share and give to others who needed help, ‘never looking for anything in return’.

Mary spoke of the friendship with Tom’s family and the many visits to their farmhouse in Kilworth and of the hospitality afforded her whenever she visited. That same hospitality she said, was shared out in Lemington Spa where Tom was based and was equally forthcoming from Eileen and her parents.

Referring again to his kind and gentle disposition, she said Tom ‘never had a negative word to say about anyone’. He trusted Eileen with everything – ‘she was his rock’ and, throughout Tom’s illness over the past twelve months, his main concern was for Eileen.

Mary spoke of the love and devotion shown to Tom by his many friends in the music business who rallied around and visited him throughout the year and in the hospital and hospice. Concluding, she said she had ‘lost her best friend’ and asked God to take Tom home and to give him the peace and rest he deserved.

As proceedings in St Patrick’s Church concluded, a recording of Tom singing ’To My Children I’m Irish’ brought a tear to many an eye. The coffin, while being taken from the church to the playing of ‘The Dark Island’ by Seamus Shannon, was greeted outside by a guard of honour formed by his numerous fellow accordion players.

Having formed The Antelopes in the late 1970s, Tom travelled much of the country and held the distinction of attracting the biggest crowd to the once famous Kilworth festival which ran over the late 1970s and early ‘80s.

Well known local musician Mo O’Connor recalled being present that same night in August 1979 and, following the dance, Tommy asked him to join the band for a tour of England, which he immediately did. They sailed the following Wednesday!

In England, they proved to be a very popular combination on the music circuit for a good number of years. Just like the situation here, the scene changed and when The Antelopes disbanded, Tom continued to perform with a group that changed personnel on a number of occasions.

He paired up with ‘The JCB Man’ Seamus Moore for a very successful tour that took them all over Britain and back here to Ireland for a spell.

Tom came to be a popular force on music cruises and music weeks in Spain, Portugal and elsewhere and here at home in more recent years, he became a regular performer on the social dancing scene that evolved at home.

The Avondhu is greatly indebted to Tom when way back in 1978, he and his band The Antelopes featured prominently on the very first edition of The Avondhu. I had occasion to call to the Healy house in Leitrim ‘for a few minutes’ to tie up the final details of the feature but, in true Healy hospitality, Tom’s mother Eily insisted on me joining them for supper.

Having tucked in, she immediately insisted on a song or two with Tom who had all the gear set up in the kitchen. Needless to say, the ‘few minutes’ turned out to be several hours, during which some great tunes were played and songs were sung – the music emanating all over the adjoining countryside. Great times, great people, great memories!

The hundreds of people including the ‘who’s who’ of the social dancing scene who turned up to pay their respects at his funeral, bore testimony to his immense popularity.

To his family, Tom was a wonderful husband and father and will be greatly missed by his wife Eileen, daughters Sinead and Ciara, Sinéad’s partner Shane, his brother Pat and wife Teresa, nephew Patrick his wife Karen and their children Devin and Rían, extended family, neighbours, friends and his many colleagues in the music business.