The Avondhu Newspaper
Home Christmas Edition Sleeping around in Kilworth 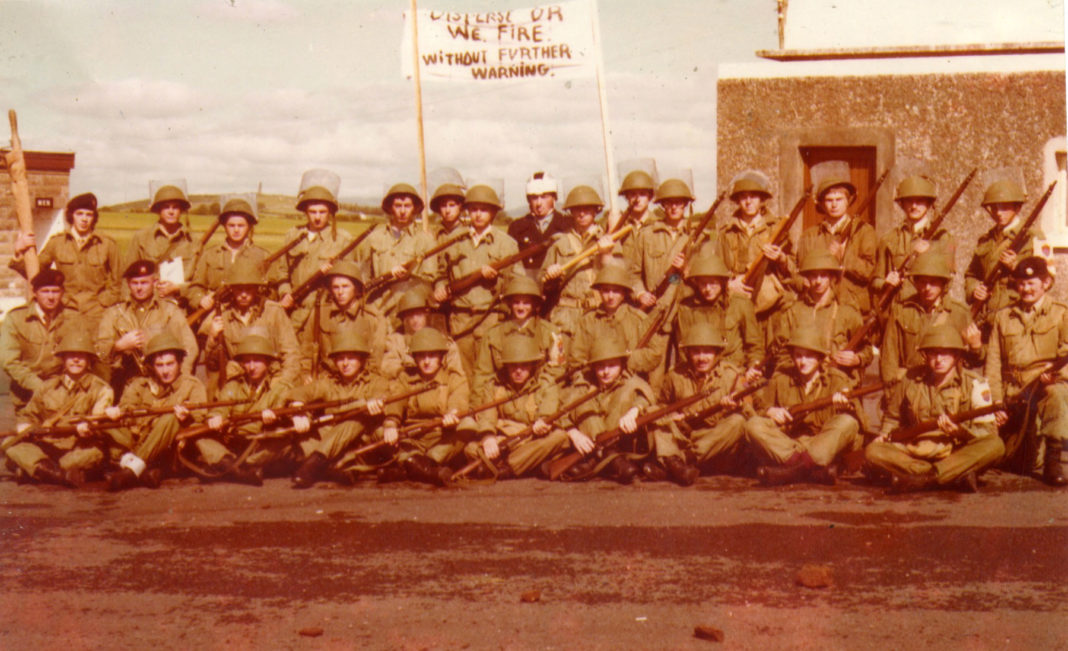 Rifleman or NCO Section Commander, in the Infantry Corps you all go through the same hardships. You could say that we slept around in Kilworth. We slept in the forest, eaten alive by midges and flies, we slept in two man bivvies at the foot of Flagstaff Hill in the month of December with snow on the ground. We slept in the target shed, we slept in trucks and we slept in trenches. But of course we didn’t sleep!

Trenches were the worst, although we had a little portion of the trench as a sleeping bay, covered with a poncho where we attached our pack rations. One night, during an attack, two thunder flashes were thrown into our trench and the lad in the sleeping bay got his great coat on fire. But he was okay once we rolled him around in the muck a couple of times!

Rommell O’Reilly, our Company Quartermaster, was none too pleased and tried to charge the lad for the loss of his great coat. Didn’t happen and it could have been a lot worse – we had a very light pistol and 6 cartridges in the sleeping bay and full of magnesium, they could have gone up!

Over the next 25 years, more than half my working life, Kilworth and I would have a love/hate relationship. Love, because I got a great buzz from working with weapons and as we were young and very fit, I enjoyed the sheer physical side of what we were doing. Hate, because over the years I had several bad experiences on the mortar, anti tank and energa ranges and there was always the possibility that these encounters with high explosives would occur again. Hate also, of the sometimes horrible weather we had to operate in.

But Kilworth was a great place to make soldiers out of young recruits. The long hard slogs in the icy depths of winter over the mountains put a steel in our heart and in our mind, we would never give up, we would never be beaten and the job would be done come what may.

There was always something happening on the ranges. We fired all types of weapons by day and at night, pistols, submachine guns, rifles, light and medium machine guns, all types of mortars and anti-tank weapons. We dug trenches, fought mock battles with blank ammo, smoke grenades, thunder flashes, mock booby traps, filled in the trenches and did it all again. We jumped off moving trucks by night festooned with the weapons of war, took part in route marches, night patrols, went through the dreaded gas chamber and were trained by the Engineer Corps how to locate mines and booby traps. We trained recruits, potential NCOs, FCA and regular soldiers and potential FCA officers and young regular army officers, training as support weapon instructors. Border operations in aid of the civil power, overseas operations in South Lebanon, it all kicked off in Kilworth.

But sometimes training for peace or war extracts a high price. By the end of the decade, four of my platoon were dead, two dying in mortar and parachuting accidents. More of my friends would die in Lebanon over the next decade. The lad who died in the parachuting accident was a superb soldier, we both expressed an interest in parachuting, he was selected. It took me years to volunteer again and do the jumps.

But the decades passed and by 1996 I was the last member of our platoon that formed up in Collins Barracks all those years ago, remaining. It was fitting that my last day in Irish Army uniform was spent up in the Ranges where my 25 year love/hate relationship with Kilworth ended – forever in June of that year.

I think of my friends who died and the wind that blows from Flagstaff seem to carry their names from through the decades, as if their section of 8 were on roll call before lights out and the bugler plays the Last Post.

Now they sleep the long sleep in lonely graveyards in the counties of Cork, Tipperary and elsewhere and their names liveth, forever more etched into monuments of granite and marble in this country and across the seas, far from their island home.

Kilworth today, 45 years on, is a centre of excellence for military training where members of European battle groups come to train, where foreign officers on courses in the UN school in the Curragh visit to study the training methods of the Irish Army. It’s a place where troops from all over the army train for various missions around the world; it’s a place where some of the best marksmen in Europe are trained and where the Ordnance Corps (bomb disposal) demonstrate to various armies why they are so highly regarded.

In an era where many military barracks were closed down, where military installations as old as the army itself were sold off, millions of euro were invested in making Kilworth what it is today, a military showpiece of the Irish Defence Forces and a place where 45 years ago, we were soldiers once – when we were young.

Convince us again Lord that your light cannot be put out,
but penetrates the darkest place,
so that we may go without fear to places where there is no love, joy or hope;
where pity and mercy are forgotten
and where men and women have stopped loving one another.
May we never have to use our weapons in anger.
Bless our peacekeeping.
Father, make us a blessing to the ill and dying,
to the weary, depressed and sorrowful.
Help us in our hunger and thirst for your righteousness
that we may create a society of justice, love and peace.
Prove your love through ours.
Amen.

The above article is dedicated by the writer to the people that he served with in Collins Barracks, Cork; Kilworth, the Irish border, the Lebanon and elsewhere, who died on home service and on peacekeeping duties with the United Nations.