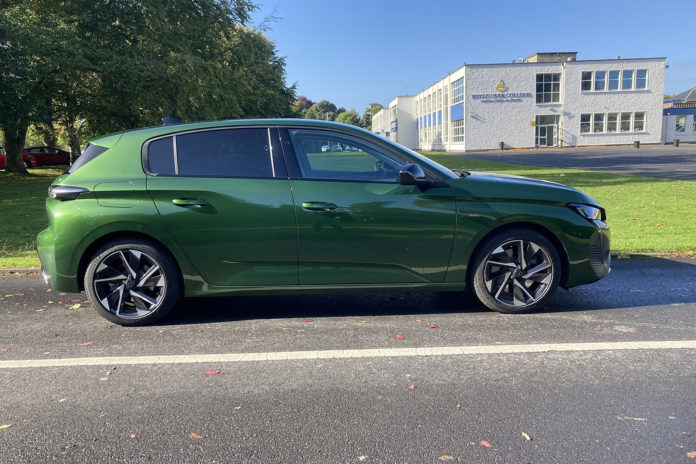 I only have anecdotal evidence, but I think Irish motorists have in the past been wary of buying green-coloured cars.

So I turned to Google to see what they it had to say. And it looks like the worry about green goes back thousands of years, before cars were even invented when green forest spirits were said to cause mischief for humans.

People believed the Fairies held the colour so dearly that they would be hostile towards anyone else who wore it. And of course we Irish loved our Fairies!

Still, I was a bit surprised when Peugeot launched their impressive new 308 in Athlone earlier this year to see that the colour of the cars was Olivine Green. And that was also the colour of my test car last week.

Gowans, the Irish distributors of Peugeot, probably had no say in the matter as they had to take the cars that were sent to them from Mulhouse in France. But Olivine Green is discreet colour and could not be described as ‘in your face.’

Peugeot choose the new 308 as the first model to wear the brand’s new ‘lion shield’ logo and it certainly is an distinctive logo. Combined with a striking new design, digital interior and a range of engine options, the 308 heralds a new generation of Peugeot cars that moves the brand up a few notches in terms of design and quality.

The 308 is really impressive looking. At the front, the grille is large and impressive, with the shield logo. LED headlamps and hook-like daytime running lights add further impact. At the rear, there are new light clusters, which have a new ‘claw’ effect.

Inside the dash is very impressive with a beautiful wrap-around effect, all topped off with a very neat steering wheel. The seats are grey with a touch of green stitching.

As usual with Peugeot the 308 is available in three trims level, Active, Allure and GT. Prices start at €31,765 for the 1.2 petrol automatic version. The price rises to €35,705 for the Allure and to €39,215 for the GT version. All 308s sold in Ireland now come as standard with an eight-speed automatic gearbox.

I drove a Hybrid version with a 1.6-litre engine, but I tended to rely mainly on petrol. I had just one very slow charging experience, 23 minutes to get 6km. After that I just relied on good old-fashioned petrol.

The boot is a decent size and while Peugeot used to always provide a spare wheel, there was no room in the Hybrid version for a spare this time. You also get keyless entry; the car locks as you walk away from it and the doors when you get close.

It’s a really classy motor and so comfortable to drive and travel in. I certainly got a lot of enquiries from neighbours young and not so young, about the green-coloured car that I was driving.

Going back to the so-called ‘unlucky green’ story. On the Monday that I picked up the Peugeot 308 I travelled to Cashel for an Alfa/Fiat/Jeep event. I was having a quick look at the famous Rock when a car, driven by a tourist, crashed into a wall below the Rock, not far from where I was parked. Was I lucky in my green car? I sure was.