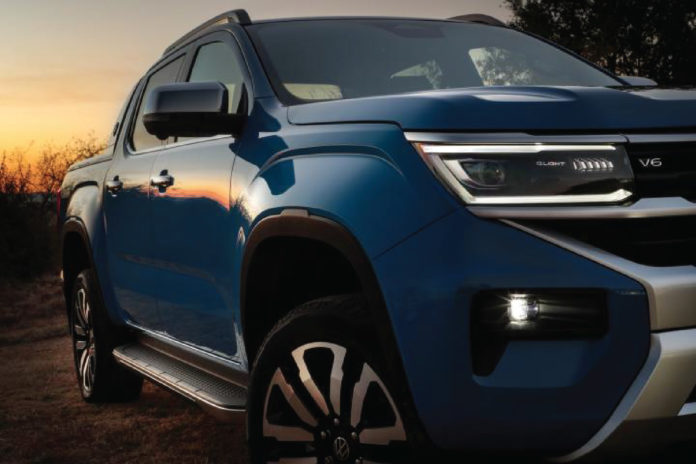 Volkswagen Commercial Vehicles presents the new Amarok. The on- and off-road all- rounder has been designed and conceived in Germany and Australia; it is being produced in South Africa. A premium pick-up for Australia and New Zealand, numerous countries of Africa, the Middle East and Europe.

Its set of features, over 20 new driver assist systems, mobile online services, engines that are both efficient and high-torque, two all-wheel drive technologies, tailor-made accessories and clear Volkswagen design DNA make the new Amarok one of the most versatile and well- balanced pick-ups in the world. The premium pick-up will come onto the market in the first few countries from the end of the year.

But the Volkswagen design makes it immediately clear: this is an Amarok. It has become bigger, more powerful, more athletic and more charismatic.

“For the new generation we have significantly modified the Amarok’s archetypal design. It is now unambiguously more expressive and even more impressive”, says Albert Kirzinger, Head of Design at Volkswagen Commercial Vehicles.

Making a statement in itself is the new front section of the pick-up, which is launching in the specification variants ‘Amarok’, ‘Life’ and ‘Style’, as well as the top versions ‘PanAmericana’ (off-road styling) and ‘Aventura’ (exclusive styling).

The new Amarok is being launched in Ireland as a four-door double cab (DoubleCab). In silhouette the wheel arches, which are half-round as before, are especially striking on both versions. The wings above the up to 21-inch alloy wheels have a powerful look and around the wheel arches are clad with robust plastic.

At 5,350 millimetres, the new Amarok is 96 mm longer than its predecessor. A wheelbase of 3,270 mm represents an increase of 173 mm. That provides more room, especially on the double cab’s second row of seats. The wheelbase has thus grown much more than the total length. And that shortens the body overhangs.

The result: sharper proportions and improved off-road capability thanks to better approach angles. The off-road capabilities of the Amarok, which will have all-wheel drive as standard in many markets, are also enhanced by much greater fording depth for driving through watery terrain. Previously it was 500 mm, now it’s 800 mm.

Volkswagen Commercial Vehicles has implemented a mix of digital functions and ergonomically configured buttons and/or push /rotary switches in the Amarok that are intuitive to use. The infotainment system’s volume and all-wheel drive system’s settings are, for instance, controlled via such hard keys. Dependent on specification, these both robust and premium-looking features are framed in aluminium.

The vehicle’ s premium positioning is also matched by the new seating: the Amarok’s driver and front-seat passenger sit on ergonomically designed seats, which in the higher specifications can be electrically adjusted into multiple positions. The rear of the DoubleCab also offers plenty of space and comfort for three adult passengers to enjoy the journey. The seats of the Style version have ArtVelours covers as standard, while in the Amarok PanAmericana and Aventura Volkswagen Commercial Vehicles uses high-quality leather.

AMPLE ROOM IN THE CARGO BOX FOR PAYLOADS OF UP TO 1.16 TONNES

It is also strikingly spacious behind the double cab: in what is known as the cargo box. As was the case on the predecessor model, the cargo bed between the wheel arches has enough room for a Euro pallet loaded in sideways. The load is strapped down via eye rings on the cargo bed, which can each take a load of up to 500 kilograms.

In line with this high load capability, the maximum payload has gone up from a good tonne to now 1.16 tonnes. The cargo box can also be secured using an electrically operated roll cover. This roll cover can be opened and closed from the cargo box itself, from in-side the vehicle or by remote control via the vehicle key.

An interesting fact for globetrotters is that the static roof load capacity is 350 kg – sufficient, for instance, for a four-person roof tent that will be available as an accessory. Either ex-factory or in the range of accessories, there will also be features such as alloy wheels up to 21-inch in size, all-terrain tyres (up to 18-inch) and a diverse array of trailer mounts.

Further features available for the cargo box will include a bike holder, a multifunction carrier system, a manual version of the roll cover and a very diverse range of styling bars. There will once again be a hardtop for the cargo bed, with which the pick-up effectively transforms itself into an SUV with the load capacity of a van.

The off-road qualities, meanwhile, can be further optimised by a bull bar, underbody protection elements, all-terrain running gear, eye rings for hauling, and a snorkel attached on the outside to the left-side A-pillar for supplying the engine with fresh air when driving through water.

Four turbo diesel (TDI engines and one turbocharged petrol (TSI engine have been developed for the new Amarok. Qualities common to all five engines are efficiency and high levels of torque. On the African market, for instance, it is the base specification engine that is being used: a four-cylinder, 2.0-litre TDI delivering 110 kW (150 PS. In terms of power output the next engine for many markets of the world is a 2.0litre four-cylinder TDI delivering 125 kW (170 PS.

In many markets the Amarok is being supplied with all-wheel drive (4MOTION as standard. Depending on region and engine there will be two different 4MOTION systems here: one with selectable all-wheel drive based on the given situation, and one with permanent all-wheel drive. The drive system technology ensures that the new Amarok too is able to master any terrain and depending on engine version is permitted to tow up to 3.5 tonnes.

Up to six different driving profiles (Drive Modes assist the driver in a variety of situations – for instance, when driving on slippery surfaces or on demanding off-road terrain. The new Amarok is also made easier to drive by its driver assist systems. More than 20 of these systems – for example ACC+ Adaptive Cruise Control (incorporates road signs into the automatic control of speed via camera scans and ‘IQ.LIGHT – LED matrix headlights’ – are new on the Amarok and make the Volkswagen more effortless to drive than almost any other pick-up on the world market.

The new Amarok is set to become the market leading pick-up on the Irish market when it launches in Q2, 2023. The previous version commanded a 20% segment share here but Volkswagen Commercial Vehicles Ireland is confident it can exceed that when the new Amarok launches in 2023.

Managing Director of Volkswagen Commercial Vehicles Ireland, Alan Bateson, said: “The new Amarok is a stunning looking vehicle and a key addition to the Volkswagen Commercial Vehicles line-up. Packed with technology and new features that haven’t been seen in this segment before, it combines the strengths of an incredibly capable off-roader with the comfort and versatility of a highly desirable pick-up. I cannot wait to see it on Irish roads.”