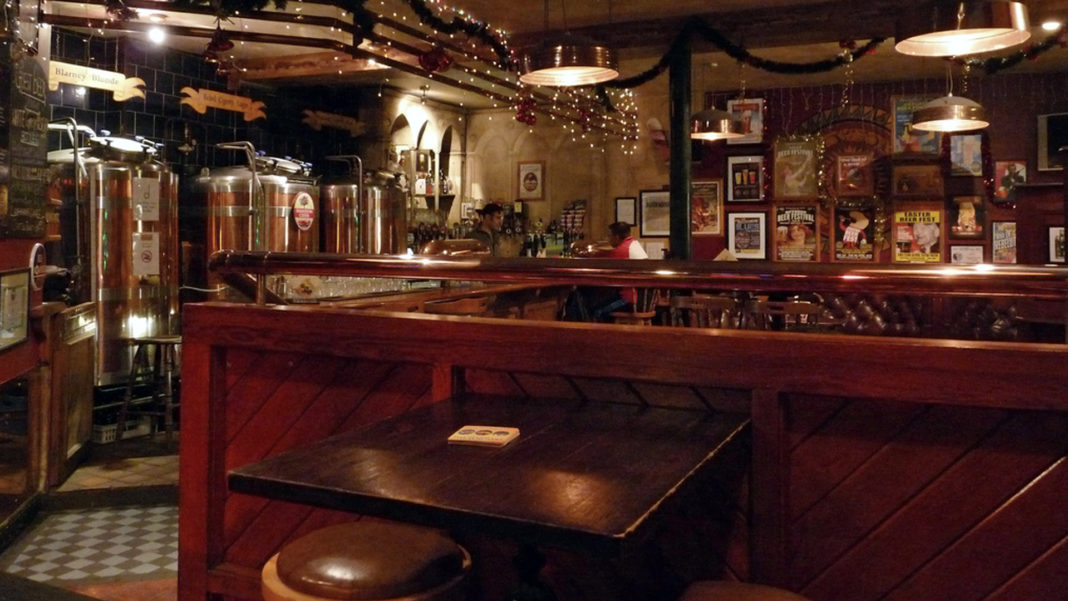 If you venture through the archway to Cork’s Franciscan Well of a Monday evening, you’ll likely hear One Horse Pony as you enter the glass-panelled door, writes Donal O’Keeffe.

There’s a real feeling of history here, as you step off the North Mall on a wintry, misty night into the stone-lined alleyway which leads to the Franciscan Well. The overhead Christmas lights are slightly out of season, but they twinkle invitingly from the red-brick arches. This is old, old Cork.

A chapter (legislative meeting) of Irish and English monks took place here in 1291. The English friars saw themselves as loyal to their king, and therefore superior to the Irish Franciscans. The local lads disagreed somewhat and – in the ensuing argument – sixteen friars were killed. (It has yet to be established whether drink was involved)

There has been a brewery on this site for literally centuries. The Franciscan Well pub itself first opened here in 1998, 21 years ago, making it Ireland’s second-oldest micro-brewery.

As you approach the door most Monday nights, there’s a good chance you’ll hear the sound of One Horse Pony from within. You’re in for a treat.

Entering the pub, maybe you’ll be lucky enough to catch their barnstorming rendition of “Muddy Waters”. The ancient bluesman would have been proud to be associated with this song.

The first thing that will hit you is the screaming, swirling, otherworldly harmonica playing of Kevin Morrison. This is virtuoso blues harp, and it will transfix you. He’s that good. It’s like hearing Howlin’ Wolf’s “Smokestack Lightnin’” for the first time. It’s that shocking, and that brilliant.

Kevin’s harmonica is almost immediately joined by the barrel-voiced blues singing of One Horse Pony’s front man, the thoroughly decent Rob Foley. Sometimes he styles himself The Reverend Rob Foley, sometimes The Reverend Rob Hercules. With a voice like that, he can call himself whatever he wants.

“This ain’t an act now, it’s just a fact now. This is a one-time only, got this groove from Muddy Waters.”

I heard One Horse Pony first on John Creedon’s show on RTE Radio 1, and that’s another pint I owe JC.

Looking around the bar, it’s a perfectly-judged balance between brightness and the sort of welcoming gloom you only get in the best of public houses. The space is well laid-out, with its many nooks and crannies giving the impression of snugs, and decorated in wood panelling, brass and copper fittings, and plush leather seating.

On the wall behind the band is an array of round barrel-tops. They evoke bodhrans, just as the high, arched shelves behind the bar remind of the Fran Well’s monastic past.

My old friend, Fermoy man Ronan Hickey, one of the best people I know, is on percussion. His timing is flawless, on bongo and on what I can only call Strapped-To-His-Feet-Comedy-Shakey-Things.

On tenor saxophone and clarinet is Jorje Kachmari. Jorje is usually found in The Underscore Orkestra, playing Balkan, swing, hot jazz and Americana. He complements Kevin’s harmonica perfectly, and the two have a ball one-up-manning each other.

One Horse Pony bass player Tim O’Leary is clearly having a whale of a time, as is Veronica Tadman on backing vocals. That’s the most obvious thing about this band. They clearly love working together, and they are clearly mad about each other. This is a band where, if the music comes first, then the fun comes a close second.

Tom Waits’ “Down In The Hole” gets the full hand-clapping, call-and-reply Gospel treatment, and Ray Charles’ “Mess Around” is a joyous, roof-raising celebration, and only complimented by laughter when, from the bar, Tom Keane – another Fermoy person – deadpans: “Wasn’t that an ad for nappies or something?”

Rob looks tired at the end of the gig, but his baby daughter is only a few weeks old, and he says that’s a huge adjustment. Still, he says, love is no burden at all, and a gig like this is a lovely way to end an evening.

The Franciscan Well’s bar itself is accentuated by opaque, back-lit glass panes. Along it are taps advertising craft beers such as ARCHWAY LAGER, FRIAR WEISSE, REBEL RED, RODENBACH CLASSIC, ASPALL SUFFOLK CYDER, STAG SAOR, CHIEFTAN IRISH PALE ALE and SHANDON STOUT. Two huge copper vats loom high behind the bar. Until recently in use, now they stand – for the moment at least – as decorations.

I confess that – since I started dropping in for a pint – I’ve grown rather fond of Shandon Stout. It tastes better than the Dublin stuff I usually drink, and the hangovers are a lot less vindictive.

If you’re in The City of a Monday evening, drop in to the Franciscan Well for a listen to one of the finest bands you’ll hear at the moment. They’re also lovely people, and their gigs are never less than a blast.

And while you’re there, you can buy me a Shandon Stout for steering you straight.

This ain’t an act now. It’s just a fact now.