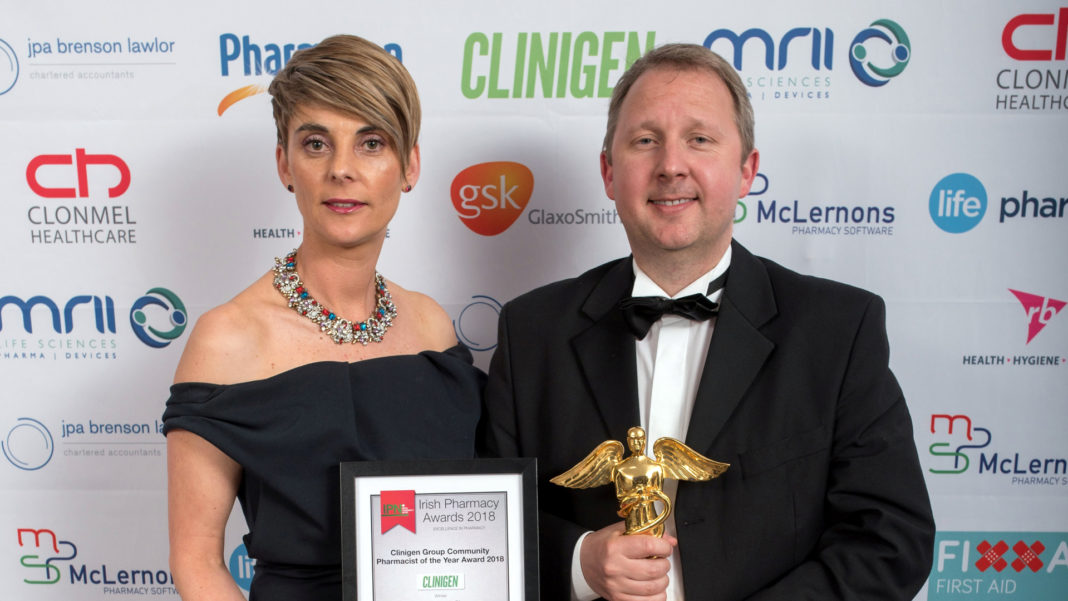 Mike Walsh, pharmacist and owner of Walsh’s Pharmacy, Fermoy was thrilled to receive the prestigious National Community Pharmacist of the Year Award 2018 last month for his services to patient care and the local community.

The host on the night was RTE broadcaster, Jennifer Zamparelli.

The Irish Pharmacy Awards champion excellence in all aspects of the community pharmacy sector with more than 600 attending the glittering awards ceremony.

With over 1,800 community pharmacies across Ireland, these prestigious awards are certainly an acclaim to be proud of.

On winning the National Community Pharmacist of the Year 2018, Mike said, “I am absolutely delighted. It was an honour just to be selected as a finalist. The award isn’t just mine, it’s the staff who are key, they are the first point of contact with the customer. They implement the systems and procedures to give customers the service and attention to detail they expect. It is also great for Fermoy town and the surrounding areas to have received this national award.”

This is Mike’s second national award having won the National Patient Nominated Community Pharmacist of the Year Award in 2015 at the Mansion House Dublin, presented to him by Mr Pat Kenny.

The Irish Pharmacy Awards 2018 process was independently judged, with the judges ranging from the Ex Registrar and CEO of the Pharmaceutical Society of Ireland (PSI), the current Head of the School of Pharmacy in UCC, current Professor in Pharmacy Practice in the School of Pharmacy Trinity College Dublin, current Chief Pharmaceutical Officer in Northern Ireland, a GP working in General Practice, current Chief Executive Officer of the Dublin Chamber of Commerce and a registered Nurse who is the Information Development Manager at the Irish Cancer Society.

The judges were looking for evidence of high standards and dedication to Community Pharmacy. They found it in Mike Walsh.

Anna Ryan, country manager at Clinigen Group said the company was delighted to sponsor the award. “The work of the Community Pharmacist has grown so much over the last few years and it’s lovely to see a business from outside Dublin being recognised for their work. Congratulations to Mike Walsh and his team.”