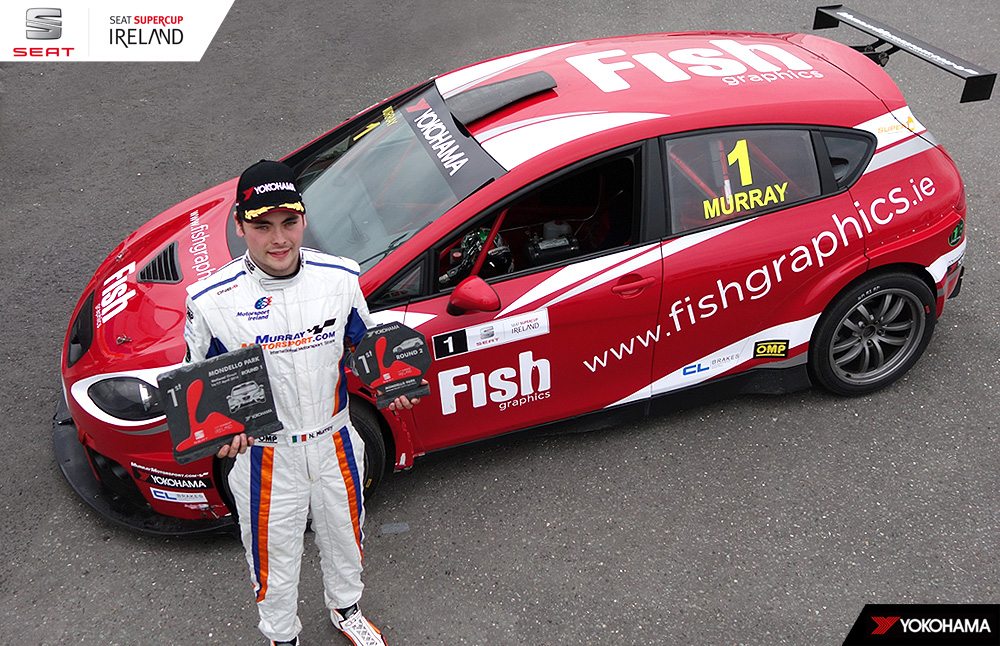 Niall Murray demonstrated just why he is the reigning SEAT Supercup Ireland Champion by putting in a dominant performance at the championship’s 2016 season opener over the weekend.

Making a one off return to the championship, the 21-year-old kicked off proceedings at Mondello Park by securing the Yokohama Pole Award in qualifying before going on to take a convincing Race 1 win over Niall Quinn and championship rookie Rob Butler.

Despite starting 8th for Race 2 as a result of the reverse grid, Murray would go on to do the double getting by his Murray Motorsport team-mate Erik Holstein to claim his 6th win at the wheel of a SEAT Supercopa.

Behind Holstein, who denied Murray the perfect weekend by setting the fastest lap of Race, John Farrelly would complete the podium.

Summing up the event as a ‘brilliant weekend’ Murray, whose focus this season is the British FF1600 Championship, said Race 1 was the ‘perfect lights to flag race’.

With his 2015 title rival Quinn starting alongside him on the front row, the 2013 Motorsport Ireland Young Racing Driver of the Year said, ‘the start and the first lap made. I got a good start and got a gap and Niall and just kept it throughout’. On Race 2 the highly rated Dublin driver said, ‘I hooked up the start again and got into 2nd but had to drive 4-5 laps with one eye on the mirror because John Farrelly was behind me’. Running on the rear bumper of Holstein, on lap 8 of 12 Murray ‘managed to force Erik to defend into turn 1 which left (him) close enough for turn 3 and when he didn’t defend I was able to get through.’

‘Good and bad’ was how Holstein described his first proper SEAT Supercup outing. Coming out of the weekend sitting joint second in the standings with Quinn, which is essentially the championship lead as Murray will take no further part, the former Touring Car Champion was a lot happier with his second race.

Having struggled in qualifying and got spun out in the first corner of Race 1, Holstein said ‘the good’ was that they found pace in the car. He said ‘it didn’t feel drastically different but it was faster’ adding ‘a big thanks to Murray Motorsport for helping find the time’.

Commenting on his battle with team-mate Murray, he said ‘I threw the race away’ before going onto say ‘Niall went for a gap that was not there. I was bumped out of the lead and that was it’. Having come into the opening weekend with limited time in his Naas Court Hotel backed car he believes he will go into the next race in Bishopscourt much better prepared.

The winner of two races last year including the season opener, Quinn described the first of the championship 6-events as ‘frustrating’. Finishing 3.3 second behind Murray in Race 1 he said ‘I was happy 2nd in Race 1. I was able to save my tyres and was confident for Race 2 but got taken out’.

Challenging Farrelly for third, the Dunboyne driver would suffer steering damaging on the final corner of lap 10 as Rod McGovern made a robust pass down the inside of the Randridge backed car. Retiring from the race as a result of the impact, Quinn said, ‘it’s frustrating not to convert our pace into points’.

Top rookie in qualifying when he put his Murray Motorsport can 4th on the grid and again in Race 1 when he got ahead of McGovern off the start to claim 3rd, Butler would be denied the chance to further impress on his SEAT debut. Suffering a drive shaft failure as the cars went to the grid for Race 2, the 24-year-old said ‘it’s motorsport’ and while ‘frustrating, (he was) still extremely happy with his performance’.

Only getting his first run in the car on Saturday morning before going into qualifying, the Navan driver said they are a ‘fantastic car to drive’ and ‘I have got to say a big thanks to Murray Motorsport especially Eoin & Niall whose input was invaluable. I’m really looking forward to Bishopscourt’.

With the short and tight national circuit at Mondello Park among the least popular among the SEAT drivers, the SEAT Supercup Ireland moves next to the very fast Bishopscourt circuit on May 8th, with drivers relishing the opportunity of feeling the effects of the cars’ full aero package.