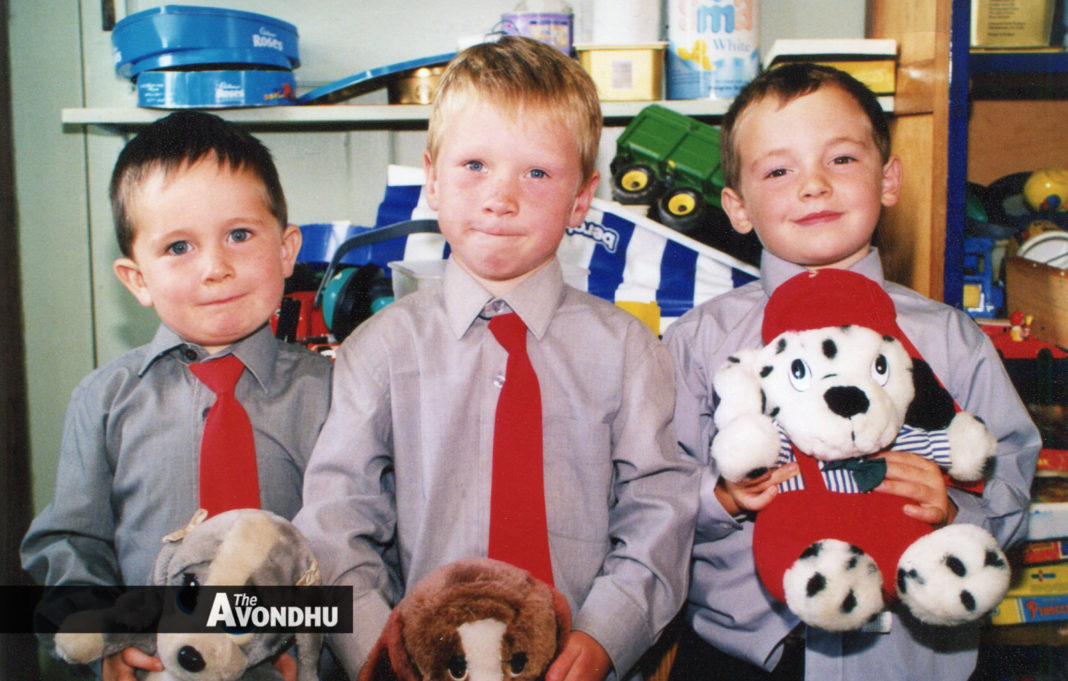 The front page of The Avondhu on 20th September, 2001 featured coverage of how the region showed its ‘solidarity with the American people’ following the attacks on the Twin Towers on September 11th. Friday, September 14th saw businesses close and three minutes of silence was held. In Ballyporeen, flags flew at half mast outside the Ronald Reagan Centre, where a busload of American tourists visited, and churches throughout the locality reported record crowds at services. The Avondhu’s editorial asked ‘Where stands Ireland?’ as Bush and the United States poised themselves for reprisals against Afghanistan, pointing out that as ‘two mighty ideologies square up to one another, the all important middle ground is fast disappearing’.

One photograph in the paper showed a special prayer service in the Town Park in Fermoy, as representatives from the three main churches gathered together. One newlywed couple from Cappoquin, Eddie and Emily Hickey, found themselves caught up in the aftermath as their plane was diverted to Canada, and they had spent the first four days of their honeymoon sleeping in a church in Newfoundland. Ballyhooly man Donal Ahern was in the Pentagon as a tourist picking up souvenirs when the plane hit. He didn’t feel any impact, but spent an extra week in America as a result before returning home, saying he was glad to be back in Ireland.

A thank you was extended from Albert and Brigid McGonagle to their customers for the presentations made to them during their last few days at ‘The Cross’, and they looked forward to seeing everyone from the other side of the counter.

Elsewhere in The Avondhu, an advert announced that Centra in Kildorrery was now open for business.

Mitchelstown GAA announced plans for its ‘Who Wants to be a Thousandaire?’ competition in The Firgrove Hotel, and new technology meant that contestants could ‘phone a friend’ via video link.

The Co-Op’s annual sale had some offers that likely wouldn’t be seen anywhere today, like cans of Carling for 99p, cabbages and turnips ‘buy one, get one free’, and a free bag of Polish coal with every four bags bought. An advert from Cork County Council offered discounts on Home Composters, where the public could pick one up for just £10 (rrp £70) while stocks lasted.

In Fermoy Rowing Club a celebration event was held in honour of Gearoid Towey after his achievements in the World Rowing Championships. In recognition, the Kilworth man received a ‘magnificent piece of crystal’ and a framed scroll. Meanwhile, Ballindangan man and Glanworth Macra member Tadhg Dunne scooped the FBD Young Farmer of the Year title.

In Currabeha, on the Fermoy to Tallow Road, a commemoration event was held to remember the death of Arthur Mulcahy, a young Irish patriot killed in 1921. An oration was given by the man’s nephew, the then-Councillor Art Supple who called his death “an outrageous crime of murder”.

Bartlemy Horse Fair celebrated a successful 2001 event, and one picture featured committee members putting down disinfectant onto mats as the country continued to feel the effects of the Foot and Mouth scare.

A letter to The Avondhu voiced the dismay of one resident who found the Irish flag hanging at half-mast throughout the night in Fermoy, when it should only be flown between dawn and dusk. Another letter queried the sheer number of lottos held locally, and queried why the GAA aren’t capable of insuring their own players.

Events at Fermoy UDC continued to be a source of news as independent councillor Arthur Dowling exited the council chambers directing cries of ‘rats’, ‘bloody communists’ and ‘hyena’ at his colleagues as Fine Gael’s Pat O’Brien was co-opted to a vacant seat.

The Entertainment pages of The Avondhu were packed 21 years ago, with 34 separate pubs, clubs and hotels advertising bands, dances, discos and cards on the two-page spread alone, with an entire separate page devoted to theatre, concerts and the Ladyboys of Bangkok show. An article covered the visit of Jimmy White and Ken Doherty to Mac’s Bar in Fermoy, before they took part in an exhibition match in the ‘Talk of the South’ ballroom.

Fermoy’s Gerard Donegan was at the World Skills Championships in Seoul along with Donal Caples from Curraglass and 13 other of the country’s top apprentices and students.

In sport, the U14 Ballyduff ladies football team, under captain Vanessa Hannon, were crowned the Waterford County champions for the second year running. In Glenroe, the juvenile hurlers captured their first U16 county title.