The Avondhu Newspaper
Home Archive Memories from the Archives – July 2001 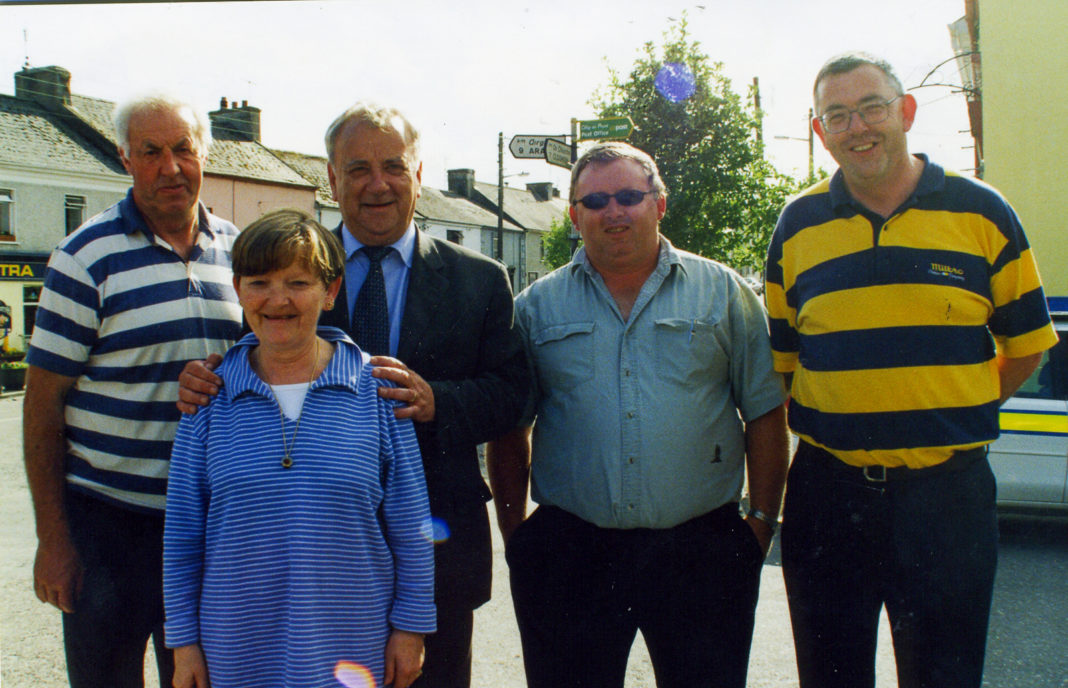 One front page of The Avondhu in July 2001, carried the news of a farmer-led picket in Ballyporeen on behalf of those whose land would be CPO-ed (compulsory purchased) due to the N8 Mitchelstown to Cashel Bypass. The picket, supported by the IFA, was held on the same day of the final public consultation which was taking place in the local parochial hall.

A little bit of history was made in Mitchelstown as water flowed again from the Georgian pump in Kings Square for “the first time in living memory” thanks to a £12,000 restoration project by the local Heritage Society. Reportedly, water wasn’t the only thing that flowed, as a champagne, wine and cheese reception followed to celebrate the occasion. The pump was switched on by Mrs Mary Gillman, one of the oldest residents of Kingston College.

In Lismore, Dave Whelan would wear the Lismore Town Commission chain of office for the coming 12 months, taking over from James O’Gorman.

Meanwhile, Cllr Joe Sherlock questioned Dairygold’s commitment to Mitchelstown, following the announcement by Galtee of a £3 million investment in a packaging plant in Dublin, as well as an announcement stating Dairygold’s intention to close down a number of supply stores.

A public hearing was announced for local TD Ned O’Keeffe, in which he was to answer allegations of being guilty of a conflict of interest over his family’s piggery business and the production of meat and bone meal.

In Fermoy, Cllr Arthur Dowling of Fermoy UDC committed to ‘getting back to business’. He had earlier been fined £100 for assaulting a fellow councillor, and claimed that six separate people offered to pay the fine for him.

In Mitchelstown, children from Belarus had spent a month long holiday in the town for the fifth year running and the 16 youngsters were now due to return home. It was reported that summer was particularly dangerous for these children, as the heat caused forest fires, which redistributed irradiated soil into the air.

The ‘lost’ items in the Garda Report give a glimpse into life in 2001, as on the missing list was a denim jacket, a Nokia mobile, and a Filofax.

There was a full page devoted to news of the recently-opened Grainstore Café in Glanworth. Elsewhere, after 22 years in business, Bernadette Ryan closed her food store at Upper Cork Street, Mitchelstown for the last time.

In Cork City, a civic reception was afforded to Ballyhooly Paralympian Tom Leahy. The discus-thrower returned home from the Sydney Olympics with a gold medal, setting a world record in the process.

Con Carroll from Kildorrery retired after 30 years service to Cork County Council, with a shindig in Sheahan’s Hilltop Lounge.

Kilworth saw the appointment of a new postmaster in the figure of Tony O’Flynn, after the retirement of longstanding postmistress Betty Lee, who had served the people of the village for 28 years. Her successor was the proprietor of O’Flynn’s Foodstore.

The community of Kilbehenny/Anglesboro said farewell to Fr James O’Donoghue on his transfer to Caherconlish.

An article in The Avondhu carried a tribute to the late John Heffernan. The staunch member of Fermoy Choral Society, who was also a keen rower, was remembered by his family and friends as a “happy man”.

Funding of £50,000 “effectively guaranteed” a future park/playground in ‘The Pool’ area of Fermoy. Over the road, there was bad news for Mitchelstown as the town continued to linger at the bottom of the table in the Inter Towns Litter Challenge. Mr Paddy Kiely of AROMA went on the record to say that the marks didn’t reflect the work that was being done or the cooperation and activity of volunteers. That same week, 70 volunteers of the town attended a Tidy Towns meeting in The Firgrove Hotel.

Curraghagalla NS had plans to celebrate their golden jubilee in 2002, and were looking at the ‘mammoth task’ of contacting every pupil and staff member of the school since 1952.

One of Britain’s most successful and respected race horse trainers, Mary Reveley, was in Kildorrery to meet her friends, the Walsh family. Their mare, ‘Function Dream’ had joined the trainer’s stables the previous year.