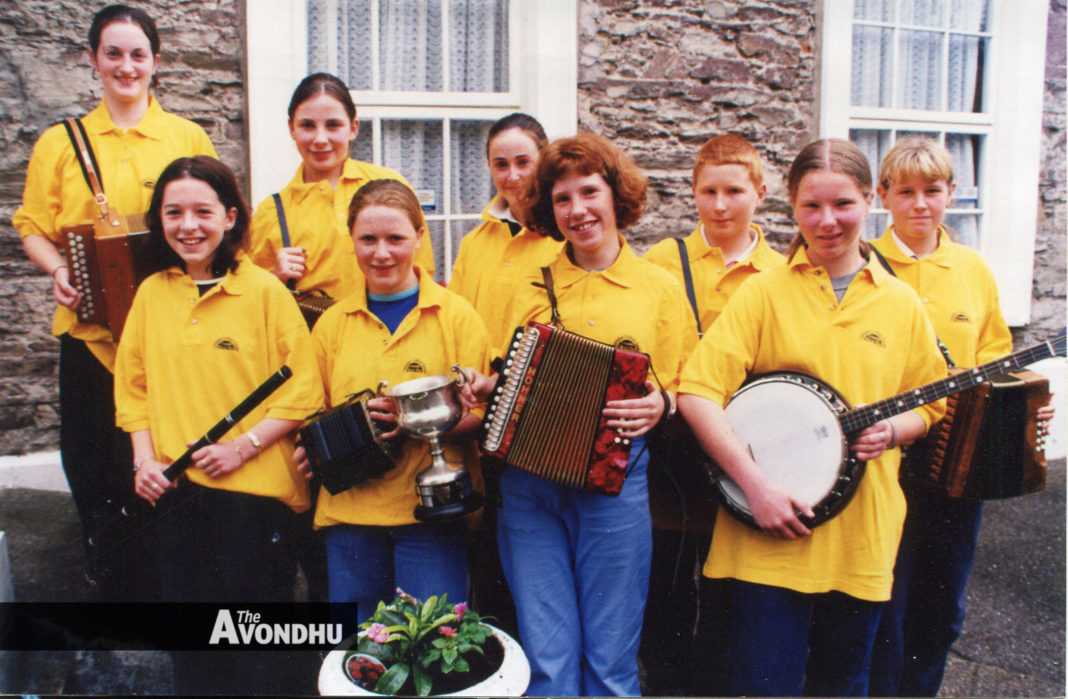 Happy Leaving Cert students getting their results were pictured on one front page of The Avondhu in August 2001, as well as another picture of a group of West Waterford Wolfe Tones fans “ready to decommission a few cans” before the group’s gig in Castletownroche.

In Fermoy, the mood was a little more sombre, as Cllr Michael Hanley came out against “disgusting” graffiti on Fermoy Park equipment. Despite his outrage, the article carried no hint of what it was. Lismore was similarly affected by blackguards, as the cricket pitch was desecrated and windows broken in the pavilion and GAA clubhouse. Meanwhile, flower baskets outside the post office in Rathcormac were destroyed, bins kicked over and road signs dented. On the Fermoy/Rathcormac road, Gardaí were seeking three individuals after their white Ford Escort drove into the back of a stopped bus and fled the scene through nearby fields.

Confusion surrounded a £40,000 Urban Renewal Allocation for Mitchelstown. AROMA believed the money had been granted for community projects. However, the county council informed the group that it, plus £20,000 more, was going to be used for footpath repairs on Lower Cork Street against their wishes. The council indicated AROMA’s approval was not needed and should they disagree, the money could be taken to another town.

Nine-year-old Sarah Browne from Araglin heard the news that she won a place on RTÉ’s Fame and Fortune gameshow from her hospital bed, where she was recovering from a broken leg following a scooter accident; dad Michael would be taking her place in the hotseat due to her age.

A plan to replace Mitchelstown, Fermoy and Midleton marts with a new ‘super-mart’ was being considered by Cork County Council. Meanwhile, in Mitchelstown, plans for the new £4 million leisure centre were unveiled, including a gym, a 20-metre swimming pool, toddler pool and all-weather pitches.

In Rathcormac, the new cemetery was consecrated by Fr Neilus O’Donnell and Rev John Fanning.

An extremely sarcastic article brought up the topic of a civic reception for Michael Flatley, plans for which had gone quiet since the motion was raised at a Fermoy UDC meeting earlier in 2001. The writer questioned the wisdom of a civic reception for a man based on nothing more than his “deciding to live here”. This time, Cllr John Hussey wanted to welcome “his Flatleyness” to the Féile Fhearmuí festival. His attendance was not confirmed. The Féile was to encorporate four days of Irish music to entertain the townsfolk.

Castlelyons planned to host a cross-dressing football match, where the “lean, athletic, desirable and almost hair free” Bogland Beauties would take on the Castlelyons’ Cuties. A referee had yet to be appointed, but would be clad in a little black number as per tradition. In typical rural Ireland fashion, a draw would also be held with the chance to win a Belgian Blue bull calf.

Over in Fermoy (and presumably not wearing dresses), snooker stars Ken Doherty and Jimmy White would face off in the ‘Talk of the South/SG1’. Both players would also be taking on local snooker hero Daithi Whelan.

‘Strategy needed to deal with Travellers’ was one headline in The Avondhu 21 years ago. Waterford TD Austin Deasy called on a government action in order to create peace between members of the Travelling community and settled people in areas like Dungarvan, where the situation was “out of hand”.

Those in Glanworth were greeted to the sight of a hot air balloon rising through the mist in the early morning, as eight guests of The Mill were floated over the Blackwater Valley to Castlelyons, before being whisked back to Glanworth for a champagne breakfast. ‘Through the Fields’ was another theme for The Village Arts Centre in Kilworth, as it hosted an evening with celebrated writer and poet, Alice Taylor.

At Ballylanders Pattern Festival, thousands of pounds were raised in a head shave undertaken by a number of men and one Mary Daly, the only lady to take part.

A “magnificent community effort” rejuvenated the site of the old St Brigid’s Well in Britway and locals Patrick O’Regan, Ger O’Regan, Sonny Cotter, Anthony O’Regan, Dan Cotter and Tom Daly were pictured for their efforts. Meanwhile, an article on Sunnyside Fruit Farm, Rathcormac showed beaming young labourers laden down with fruit, in the days when one could be put to work at 14.