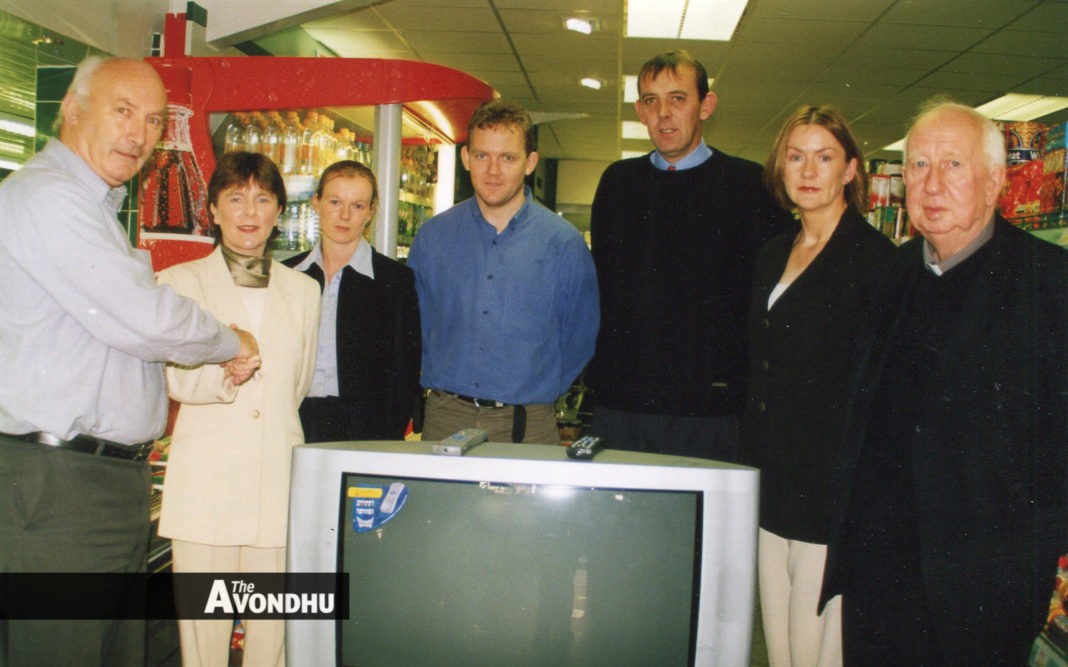 Mitchelstown Credit Union moved into their new HQ on Lower Cork Street 21 years ago, opening the new £1.8 million premises on 30th October 2001. The theme of the building was to reflect the nearby Mitchelstown Caves: ‘on entering the building you are met with giant stalagmites made from limestone and the surrounding dome face which is sculptured with stalactites.”

Sources at both the Department of Justice and at Garda Headquarters said that no decision had been reached on the future of Fermoy Divisional Headquarters, which was rumoured to be moving to Mallow. Former councillor Michael Hanley accused the elected members of ‘yielding to a fobbing off routine’.

The anti-tolling group of the M8 in Fermoy refuted NTA findings that stated the 62% of the Irish public are willing to pay tolls for better roads. The survey was of 1200 people, of which 743 were motorists. Chairman Donal O’Lochlainn pointed out that people who aren’t drivers would naturally choose that drivers pay the toll rather than general taxpayers.

A public meeting was to be held in Rathcormac to address any questions on the Euro currency, to come into effect in the coming months. In Kilworth, Peter McCarthy was presented with the Bene Merenti Medal by Bishop John Magee for the work he’d done with the Catholic Church down through the years.

Four students from Fermoy and Kilworth were to receive a Humanitarian award for the voluntary efforts for the Belarussian Orphanage Project. Clodagh Murray, Orla O’Sullivan, Niamh O’Sullivan and Joseph Aherne were among 35 youth volunteers who travelled to Belarus the previous summer.

Paddy Kenneally of Tallow retired after 40 years as caretaker of the cemetery, and was pictured in The Avondhu with his good friend Richie McNamara. Elsewhere, Mitchelstown butcher Mervin Hodgins was a finalist in the National Butchers Sausage Competition.

Anti-dump activists lashed out at Cork County Council over their history with the mismanagement of Ballyguyroe Landfill, which the council were now maintaining at a cost of £100,000 a year saying ‘They have created a monster’. Chair of the Glenanaar Valley Community anti-dump group Mary Mannix, said that ‘the fact remains that whilst Ballyguyroe landfill was operated for years without any regulation, we do not know what went into the six unlined cells.”

On the subject of domestic waste, Waterford County Council unveiled a recycling truck to pick up dry recyclables, the first time that a local authority had initiated such an ‘ambitions waste reduction project’. It aimed to cut landfill waste by 35%.

In a nod to changing food tastes, Ryan’s Centra advertised a new offering of organic, yeast-free and gluten-free breads.

The 50 acre People’s Millennium Forest in Glengarra woods was officially opened where over 74,000 native Irish trees were planted on behalf of households in Tipperary and Cork. In Fermoy the same week, the Fish Market was officially opened. Local clergy, both Fr Anthony O’Brien and Presbyterian minister Sam Mawhinney, attended to bless the premises, and clowns, magicians and face painters kept the shoppers entertained.

Four Fermoy rowing club members – Mike Donnellan, Paul Hickey, Evan Donnelly and Donal Murphy took third place in the annual Rhine marathon, and overall came home with two gold medals and one bronze for various achievements. Elsewhere in Fermoy, Brian Toomey was to head up the introduction of wheelchair karate in Ireland following his return from Japan where he learned the new style from its inventors.

The Harbour Rovers hurlers of Glanworth were to face St Mary’s of Ballineen in the Cork County Junior B Championship Final under captain Tom McGrath. A picture for the piece showed the team of 1940 in a black jersey with a white ‘V’, at the time the earliest known photograph of Glanworth hurlers.

Watergrasshill had a draw with Ballyhea in the County final of the Minor A hurling championship in a ‘cracker’ of a match and were looking forward to a replay, while Doneraile took the North Cork Minor B Hurling title with a win over Kilbolane, captained by David Buckley.

Fermoy Soccer Club were knocked out of the FAI Intermediate Cup in controversial circumstances as a goal was disallowed in injury time, allegedly for offside. The referee allowed the goal, but reversed his decision after discussion with the linesman. Meanwhile, Liam Kearney was congratulated after making the Ireland U19 squad for the upcoming European qualifiers. In the Red House League, Valley Rangers took the Tony Bolger cup with a win over Lismore.

Elsewhere, the Mitchelstown area won the County Area award for the fifth consecutive year for having the highest level of youth participation at the Community Games in Cork County.

Finally, St Colman’s hurlers gathered in the Firgrove Hotel in Mitchelstown to celebrate their successes in the Dr Harty, Dr Croke and the Dean Ryan Cups in the last season, with special guests Kilkenny All-Star DJ Carey and Cork GAA board chairman, Jim Cronin in attendance.