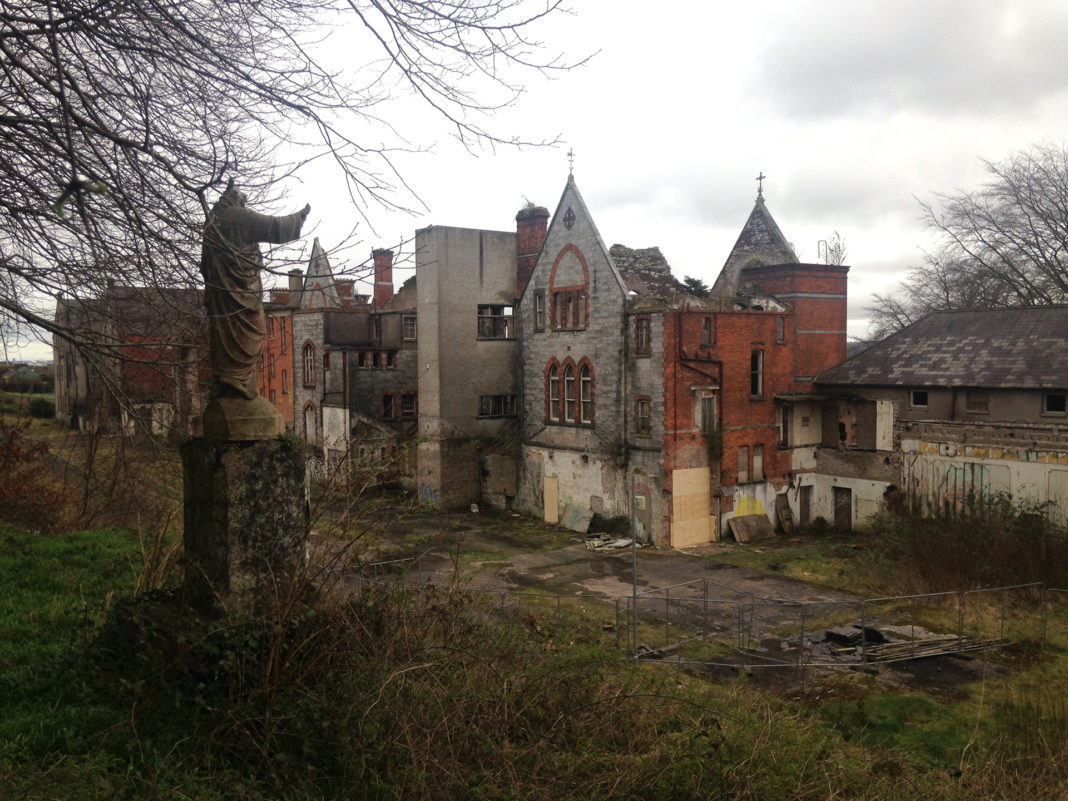 Last week I did something I’ve never done before.

I lodged a planning objection.

The development to which I objected is proposed for a dangerously-derelict property, in a neighbourhood twenty miles from my home. Perhaps I should mind my own business.

But then, this is my business.

This is all of our business.

The development to which I objected is the proposed building of 234 apartments on the old Good Shepherd Convent site in Sunday’s Well in Cork. Locals object, validly, that this would more than double the area’s current population density and place unbearable pressure on the surrounding infrastructure.

I,  and others, objected for another reason.

On the north-west corner of the three hectare site, above and away from the ruined convent, lies a memorial, smashed to pieces, overgrown and sealed behind ten-foot, razor-wired walls. 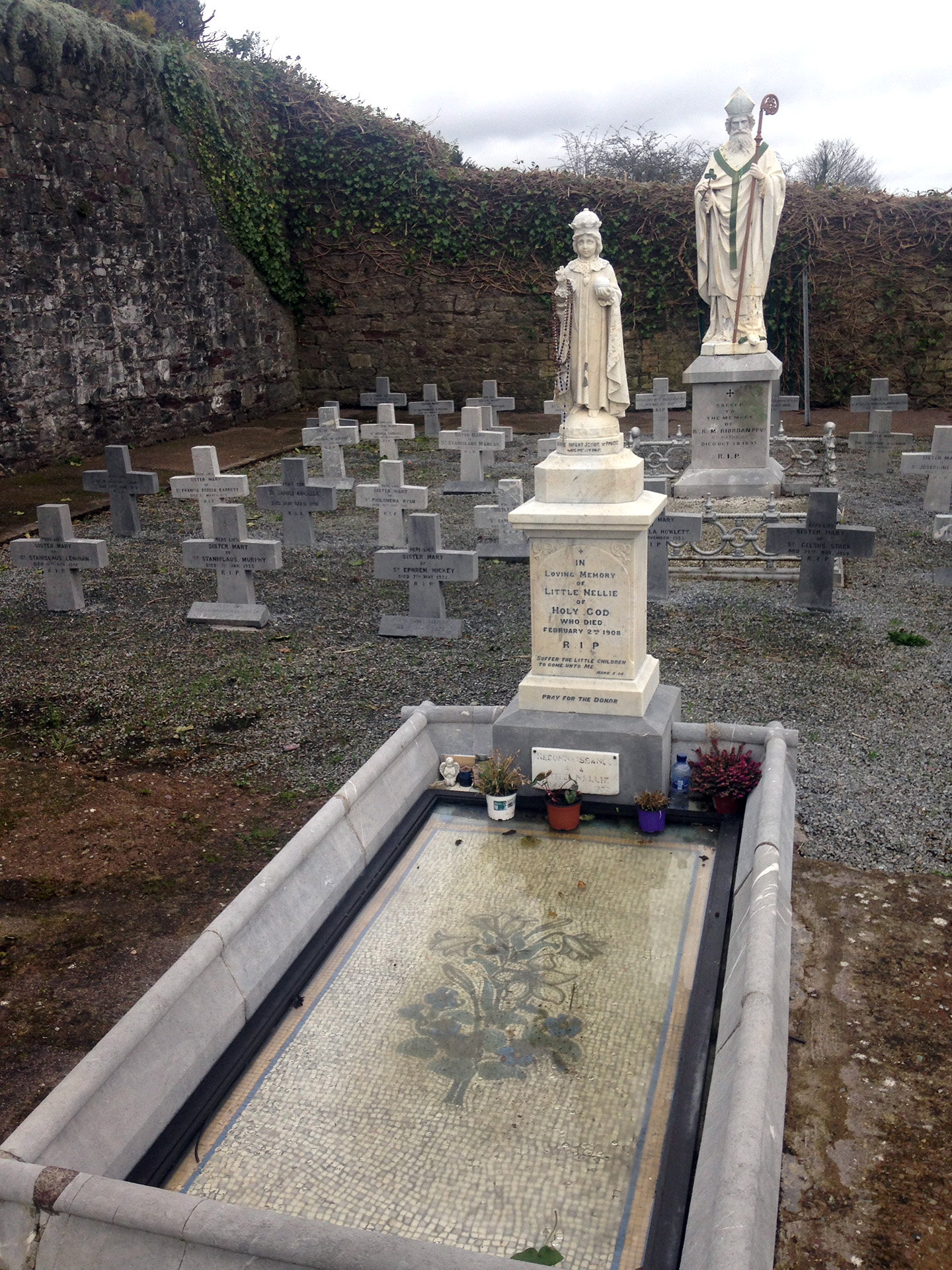 The vandalised memorial marks a mass grave, containing an uncertain number of women who lived despairing lives of drudgery in the Good Shepherd Magdalene Laundry, ignored in life and now, it seems, determinedly forgotten in death.

Away across the site is an immaculately-maintained graveyard. Each stone cross records the individual life of one woman who lived, presumably, a life of prayer and reflection and who helped run a prison for “fallen women”.

The contrast could not be clearer.

The centre-piece of the nuns’ cemetery is a shrine to Cork’s unofficial patron saint, “Little Nellie of Holy God”. It was Nellie who first drew my interest to the site, when the Bishop of Cork and Ross, John Buckley, two years ago proposed she be exhumed and moved to a more accessible location.

Ellen Organ was born in Waterford in 1903. As a baby, she was dropped, suffering serious spinal injuries which left her in constant pain.

When Nellie was two, she moved with her family to Spike Island, where her mother, Mary, became fatally ill with tuberculosis. In her illness, Mary became fervently religious.

When Mary died, her children were placed in care. At four, Nellie went to the Good Shepherd Convent infirmary, suffering from whooping cough and tooth decay so bad that her jaw disintegrated. Worse, she had contracted TB and had less than six months to live. Astonished at Nellie’s religiosity, the nuns petitioned successfully the then-Bishop to grant her Holy Communion, then reserved for children over 12.

When Nellie died, Pope Pius X declared her a sign from God and ordered the age of Communion be reduced to seven. A year after her death, the nuns had her re-buried on their property. They claimed that when they opened her coffin, her body was perfectly preserved.

For years afterward, pilgrims visited Little Nellie’s grave. Clearly, Bishop Buckley wanted such pilgrimages to resume, although his proposal to exhume Little Nellie seems to have been quietly forgotten since Justice For Magdalenes Research and others pointed out that Little Nellie and the nuns are not the only people buried in the Good Shepherd site.

There is at least one mass grave there. Local knowledge suggests there are almost certainly more graves.

It seems obscene that Little Nellie – a small child whose head was filled with religion and who lived a short, painful life – is celebrated by the Catholic Church, even as it does everything in its still considerable power to forget the approximately 10,000 women and girls it enslaved in Irish Magdalene Laundries between 1922 and 1996.

The red-brick Good Shepherd ruin looms over Cork’s north-side and it’s no easy thing to get into that awful place. Anyone wanting to pay respects to the Magdalene women buried there would face a hazardous and probably illegal journey.

Local resident Rachel McGovern says she is anxious the site be preserved as an area of remembrance.

“There is something extraordinarily insensitive in putting a Celtic Tiger-style development on that site. It’s not that we don’t want it developed; it’s that we want a development that has sensitivity and is cognisant of the wrongs that have been done here and elsewhere.

“This brings together at a very poignant time, so many of the issues that are facing the country as a whole, it is an emblematic site.”

Justice For Magdalenes Research told me:

“In light of the Good Shepherds Sisters’ poor record-keeping, and given that there are significant discrepancies and gaps in the existing headstones marking Good Shepherd graves in Cork, every effort should be made to identify all human remains that may be interred at Sundays Well. It is absolutely imperative that the nature of the identification process is determined and carried out by independent experts and the results made publicly available.

“Any and all plans for redevelopment should be done in consultation with Magdalene survivors.

“Premature development approvals, further highlight the failure of the Department of Justice to implement full restorative justice, which should include proper care and identification of gravesites.”

If there’s any justice at all, how can planning be granted, given JFMR’s objections?

Meanwhile, surely the priority must be to allow survivors and relatives access to the (identified) Magdalene grave. Given that the developers have reportedly signed over that section of the site to Cork City Council and given that the adjoining field is publicly-owned, surely access from Strawberry Hill, although difficult, cannot be beyond the wit of officials.

The Good Shepherd Magdalene Laundry is not ancient history, it is living memory. Women were imprisoned and enslaved here, for the crime of being pregnant. Women were worked to death here and there are mass graves here.

Surely no work can be carried out without a complete forensic investigation of the site.

The development proposed is completely unsuitable for the scene of such a monstrous crime. A place which saw such suffering and evil simply cannot be concreted over and forgotten.

The eyes of the world are on Ireland. What Cork does now will be seen as a measure of whether we have learned anything at all.

The very least we can do now is remember the women whose lives were stolen and ensure that they are never forgotten again.