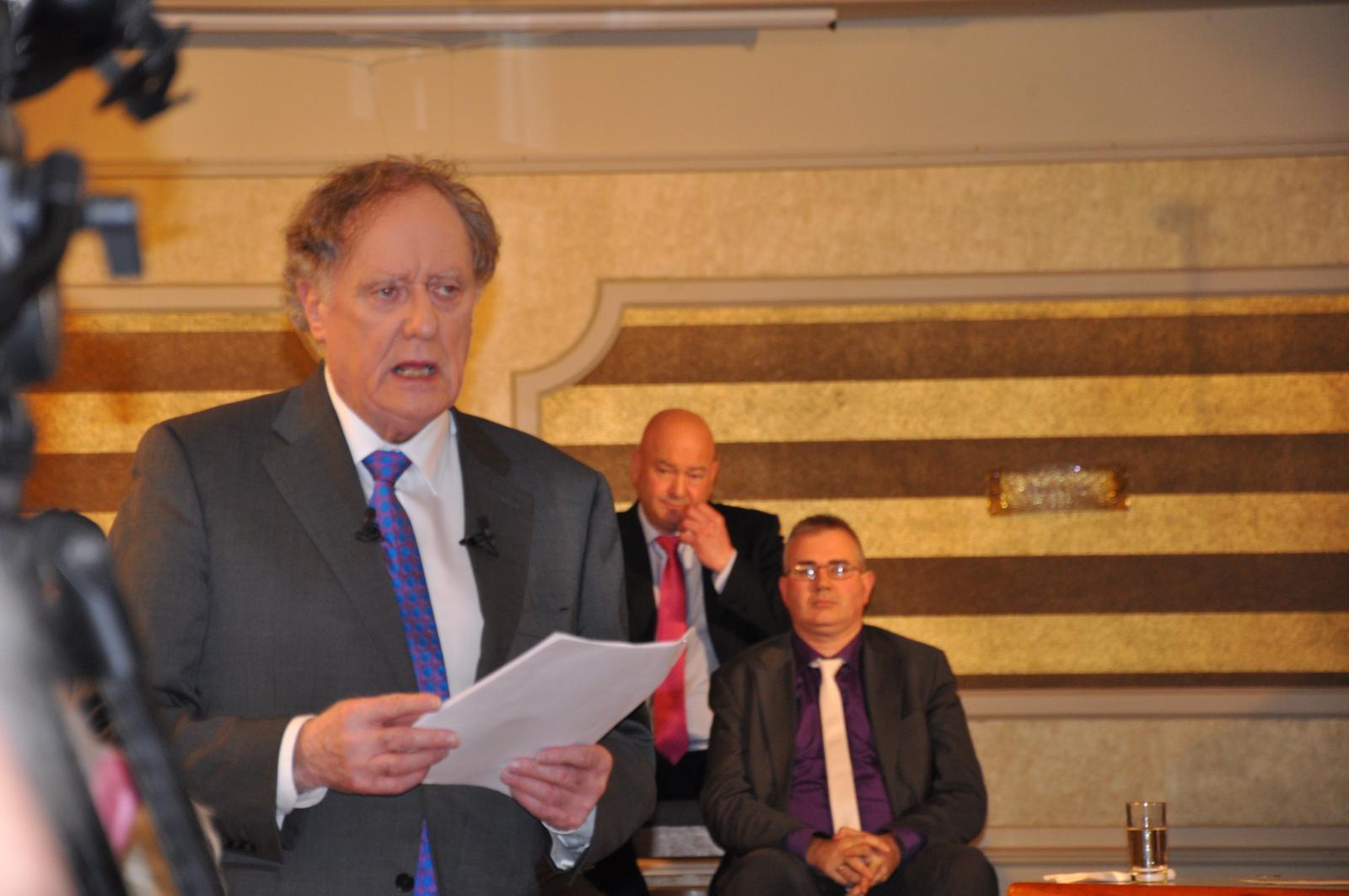 Monday night saw Mitchelstown’s Firgrove Hotel as the venue for a recording of TV3’s The People’s Debate with Vincent Browne for the East Cork constituency. The crowd began arriving early for the non-ticketed event and the room was packed by the time the cameras started to roll.

Before proceedings began, Vincent Browne set out the ground rules for the audience and asked for topics that they wished to discuss. He also humorously pointed that there was no need for people to keep welcoming him to Mitchelstown as he comes from Broadford, Co Limerick ‘which is only up the road’. He also pointed out that Cork East is the 15th most affluent constituency in the country and remarked that the sitting TDs who didn’t show up (Sandra McLellan (SF), Tom Barry (FG) and David Stanton (FG)) must not have wanted to be accountable to an audience of their own constituents.

Economic issues were first on the agenda with Vivian Farrell from Cobh stating that she sees no evidence of what she termed the ‘trickle down’ economic recovery there. Sean Sherlock TD disputed that it’s a trickle down recovery and pointed to the Government’s achievements and ongoing aspirations. He said they were returning to the primacy of food production and tourism to create jobs. Kieran McCarthy (Indep) said that Cobh has a high rate of youth unemployment and criticised the ‘slave labour’ job schemes that give a false picture of the amount of people in real employment.

Pat Buckley (SF) agreed that it’s a false economy while Paul Bradford claimed we are over dependent on foreign industry and that a new tax system and structure is needed. Kevin O’Keeffe (FF) said the ordinary person has no money to spend at the end of the day stating we have ‘a two-tier system’. Sean Sherlock responded that thousands of jobs had been lost under the watch of Fianna Fail. He also said that it would cost €1.2 billion to build the M20 and currently the money isn’t there.

On the issue of housing and speaking from the audience, Cllr Frank O’Flynn (FF) emphasised that he knows of families staying in hotels and knows others who are homeless. Sean Sherlock said Cork County Council had a budget of €80m for housing and that councillors had a role to play in addressing the issue also. Barbara Ahern (FF) said her party in power would build more social housing while Paul Bradford (Renua) said he would love to be Minister for Housing so he could implement his ideas. Ciara Leonardi Roche (Anti-Austerity Alliance) revealed that she and her family had first hand experience of this issue as they had been homeless for a few months last year. Pat Butler (SF) reiterated the need to build social housing and affordable housing.

On the topic of education, principal of CBS Primary in Mitchelstown Mary O’Callaghan, highlighted the fact that class sizes in Ireland stand at an average of 30 children per class ‘which simply isn’t fair on children’. The European average is 21 but we should aspire to have 20 pupils per class. Sean Sherlock was at pains to stress the positive work the Government had done in the area of Education while, at the same time, admitting that more needs to be done. For example he said the numbers of Special Needs Assistants had been increased and that many school prefabs had gone. Ken Curtin (Social Democrats) said his party agrees with everything Ms O’Callaghan said and the pupil ratio of 20:1 is their aspiration.

One of the more humorous exchanges of the debate took place when an old age pensioner accused the Government of taking away his Christmas bonus. Sean Sherlock told him it was the previous FF Government that was responsible for that. Kevin O’Keeffe admitted that this was done by his party but cited factors relating to the world economic downturn. He said that although tough decisions had to be made, FF now has the highest number of councillors in Ireland.

The most heated exchanges probably took place when the topic of the 8th Amendment was being discussed. Pro-life and pro-choice members of the audience gave their views on the emotive issue as did all candidates. Ciara Leonardi Roche for example said it’s down to choice whether a woman has an abortion or not.

On the issue of mental health Ger Canning who described herself as a voter in the constituency said in her view the services had not been improved despite the fact that Enda Kenny said they would be.

Overall the People’s Debate for Cork East, which was the 36th constituency to be featured, perhaps wasn’t the most heated, but then as one audience member articulated afterwards: “Perhaps one needs all candidates to show up on the night for that to materialise.”