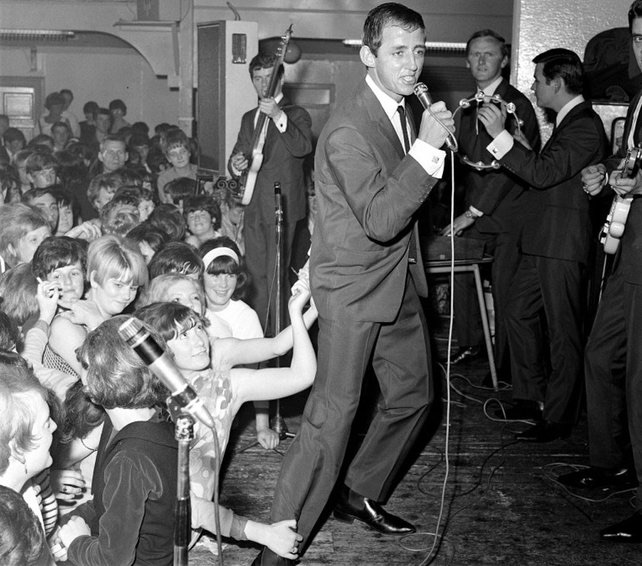 Dickie Rock was not always the front man with The Miami Showband, rather, the band started out with Jimmy Harte, their first date was in The Palm Beach Ballroom in Portmarnock. Soon they had built up a large following, playing four and five nights a week up and down the country.

However, Jimmy was studying at the time and when the ultimatum came to go professional, he followed the wishes of his parents and went back to college.

And it was here that (Richard) Dickie Rock who had been playing with a Dublin band called the Melochords, came on board.

While The Miami had already been very popular, they moved to a new level with Dickie as the new frontman. Now, Dickie and the Miami were on the same level as The Royal and The Capitol and in 1963, Dickie and the band hit the No 1 spot with the release of ‘There’s Always Me’, written by Don Robertson and first recorded by Elvis Presley in 1961.

They released ‘I’m Yours’ in early 1964 which again hit the number one spot and this was followed later in the year by an appearance at the famed London Palladium. Dickie and the band could do no wrong. Indeed this writer recalls a day in 1964 or ’65 when many of the secondary school girls in Fermoy were late returning to school after their lunch break, Dickie Rock and The Miami being the cause. The band had stayed overnight in The Royal Hotel in Pearse Square having played in The Arch Ballroom in Tallow the night before. It was a spell of hysteria that saw traffic come to a standstill for ten or fifteen minutes as Dickie and some of the band waved from one of the first floor windows to the screaming girls below.

Before 1964 was through, Dickie and the band had a massive hit with one of his all time classics, ‘From The Candy Store On The Corner’. Other band members also featured – the band’s guitarist Clem Quinn had a hit with an instrumental ‘Buck’s Polka’ while their trombone player Murty Quinn, had Top Ten hits with ‘There Goes My Everything’ and ‘One Kiss For Old Time’s Sake’.

And the hits kept coming – ‘Come Back To Stay’ hit the No 1 spot again In 1966 after Dickie represented Ireland with the song in the Eurovision Song Contest where he finished fourth overall. Thousands turned up in Dublin Airport to welcome him home. This was followed by another No 1 record, ‘Simon Says’ in 1967. Later that year however, the showbiz world was rocked with the news that The Miami was going to break up, and so, the original Miami played their final gig on September 3rd in The Oyster Ballroom, Dromkeen in Co Limerick.

Dickie went on to perform very successfully as a solo artist and, following an RTE documentary in 2006 showcasing his place at the forefront of the Irish Showband scene, Dickie received a lifetime achievement award in October 2009. Now in his 84th year (b Oct 10, 1936), he still performs occasionally.