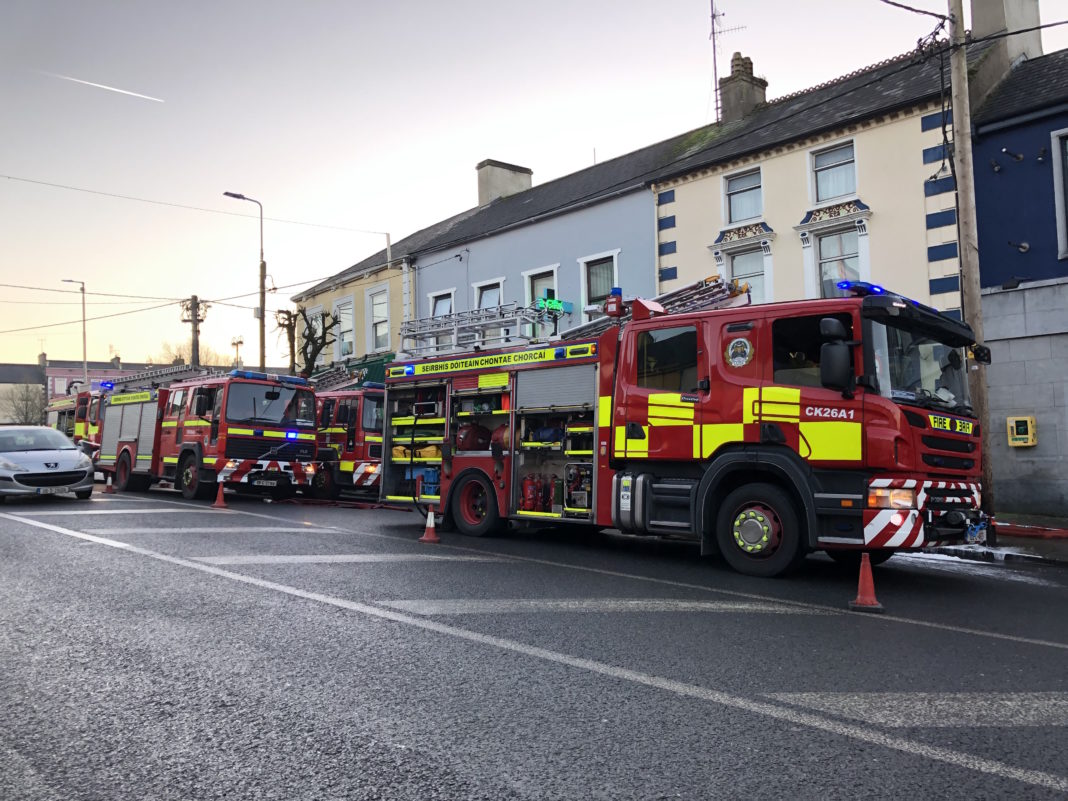 A swift response from Mitchelstown Fire Brigade averted disaster as a blaze burst an oil tank at the rear of shops on the town’s main street earlier this week.

The incident on Monday afternoon, January 20th saw four units of the fire service, two from Mitchelstown and another two from Fermoy, respond to the incident at WJ Ryan’s Footwear.

Mitchelstown Fire Service arrived first, just two minutes after receiving the emergency call. They immediately donned breathing apparatus and ventured bravely into the smoke and flames to confront the blaze, located at the back of the building.

The seat of the fire was in a rear shed-like structure and it became instantly obvious to the local firefighters that the blaze could prove a disaster for multiple buildings, as a fuel tank was ruptured by the intense heat.

Sean Walsh, of Mitchelstown Fire Service confirmed to The Avondhu that it took his team thirty minutes to bring the fire under control – initially fighting the flames with water, but then changing to foam as oil gushed out of the ruptured tank.

“It was quite a nasty fire at the back of WJ Ryan’s Footwear shop. There was a shed where the oil boiler and tank were housed. It is not known how it caught fire, but the whole thing turned into quite a nasty blaze.

“The oil tank melted and the oil caught fire to add to the danger of the situation. As we put water and foam in to put the fire out, the flow of gravity caused the oil to come out to the front on to the street unfortunately.”

Fire fighters were concerned during the height of the fire that it may spread to adjoining properties.

“At the height of it, it was threatening the back of Fitzgibbon’s Pharmacy as well and the flames were going up the back wall and the heat broke some windows at the back of that shop. We managed to snuff it out reasonably fast and stop it spreading. It could have spread out into the chemist’s (premises) and into the shop part of Ryan’s Footwear.

“There is very little room at the back of those buildings. The fire broke out in a little shed which was containing the oil tank and boiler. That shed would have been attached to Fitzgibbon’s building and Ryan’s building so when it caught fire it was threatening to spread into both main buildings, but we managed to contain it.”

The owner of Ryan’s Footwear could not be reached for comment at the time of going to print and the shop remained closed.

Fitzgibbon’s Pharmacy paid tribute to the fire service on their Facebook page and told customers that they were open for business.