The Avondhu Newspaper
Home All Opinions My Own In the angry, orange face of terrible times, we must stand our... 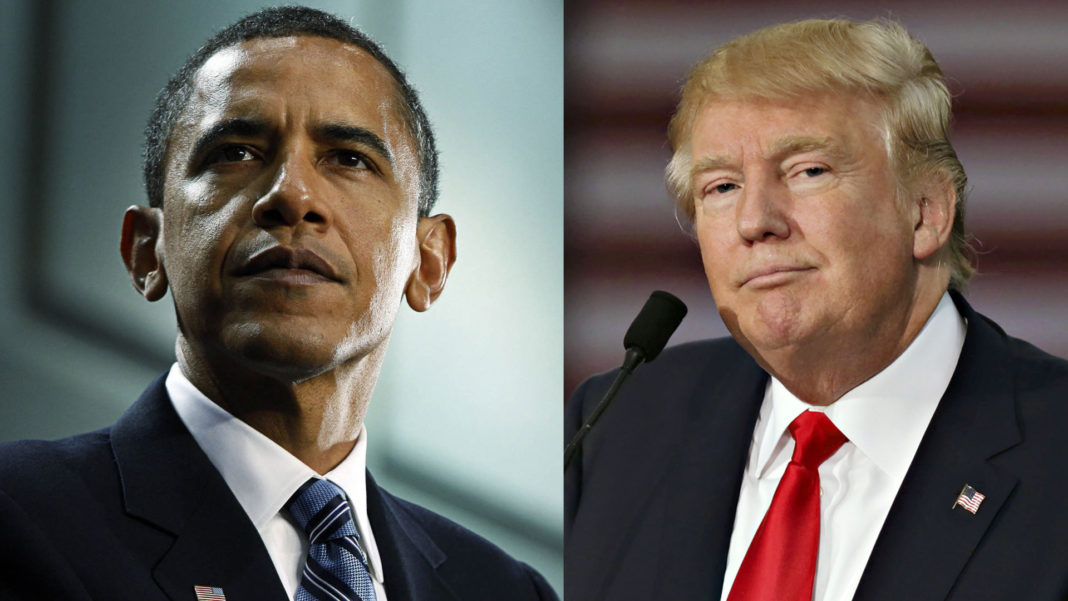 “I was born by the river in a little tent
Oh, and just like the river I’ve been running ever since” – Sam Cooke

It was 2pm on January 20th and I was sitting in my car in a run-down estate on the outskirts of Cork city. A cold, wet Tuesday. I was a sales rep, already behind on my target for the week and I had little chance of catching up. And yet I was elated.

I had the radio tuned to RTÉ Lyric FM and John Kelly started The John Kelly Ensemble with the haunting strings and soaring voice of Sam Cooke’s “A Change Is Gonna Come“.

This was the day that Barack Hussein Obama would become the first African-American president of the United States.

After two terms of George W Bush’s catastrophic and witless mismanagement, here was a once-in-a-lifetime breath of fresh air, a graceful, gracious, warm, charismatic, erudite, calm and deeply thoughtful man, a gifted orator and someone who radiated intelligence and decency.

Eight years on and Obama leaves office, many of his ambitions thwarted by his Republican Party rivals and his legacy about to be dismantled. For many of us, the thought of the impending US presidential inauguration now causes not joy but dread.

In its anger and disaffection, the American people, in the plurality of electoral colleges – but not the popular vote – elected as Obama’s successor, a monster. A graceless, petty, vulgar, racist, sexist, volatile, thoughtless, misogynistic, narcissistic and mean-spirited bully, a liar and a cheat, a self-confessed sexual predator and a spiteful man-child who at the very least has some serious questions to answer about his connections with Russia and its kleptocratic and authoritarian leader.

As my friend Tom Cosgrave puts it, “Every time Trump opens his mouth… I realise how good Dubya was as US president. And in actuality he was a bad US president.”

Last week, the Israeli press reported that US intelligence agencies have warned their Israeli counterparts not to trust the Trump administration, lest any shared intelligence find its way to Putin – whom they describe as having ‘leverages of power’ over Trump – and then on to Israel’s enemies in Tehran.

I’m so old, I can remember when America’s Grand Old Party cared more about American national security and the safety of its closest allies than sucking up to the shirtless autocratic strongman running Russia.

And, as Damien Owens said of the so-called ‘dirty dossier’: “The Moscow hotel room stuff may or may not be true. But you don’t hear a lot of people saying ‘That doesn’t sound like Donald Trump’.”

The ultimate beneficiary of fake news and post-truth, Trump can now dismiss everything he doesn’t like as fake news.

We now live in a world where the Late Late Show chases ratings by giving a platform to vaccuous right wing trolls like Katie Hopkins and the Irish Times chases clicks by running sycophantic explainers on neo-Nazi terminology written by an attention-seeker.

On social media, emboldened by Trump, they’ve all crawled out from under their rocks. Anyone who speaks for kindness is considered a fair target by those Tara Flynn calls ‘Baby Nazis’. Colm O’Gorman is besieged now by more than just the usual Catholic fundamentalists. Now it’s actual fascists.

And then there’s the Uber-Liberals For Trump. They’re a new one on me. They’re the people who are so far left that – to steal an observation from the Rubberbandits – they’ve gone around the bend and come back far right. Their stream of consciousness goes something like this:

“The Democrats should have ran Bernie Sanders and I’m glad Hillary Clinton lost not because she’s a woman but because she’s utterly corrupt and Trump deserves a chance . . . I mean he isn’t as bad as you make him out okay he’s an ogre but he’s not wrong about Muslims . . . Islam is an intolerant religion and Trump is better than Hillary and I don’t care if he does work for Putin I mean say what you like about Putin but he’s beating ISIS in Syria okay maybe he’s murdering journalists and okay you have a point that he’s a despot and he’s set gay rights back thirty years in Russia but ISIS wants to throw gay people off the roof.”

This line of, er, thinking tends to be peppered with clever sidebars like “And what about all the people killed by your buddy Obama’s drones” or “I hope you asked your Muslim friends what they think about gay marriage” or “Obama? Liberal? Oh please.” One of them mentioned something about the Protocols of the Elders of Zion to me, but by this point she might as well have been shouting “Purple monkey dishwasher“.

You don’t need me to tell you that things have taken a really horrible turn lately, and that the hope-filled day Obama was inaugurated seems a lifetime ago and a world away.

Which makes this a time for standing our ground and remembering who we are. Read a book. Volunteer. Call to your local Direct Provision centre and talk to the people living there. Join Amnesty International. Don’t walk past a homeless person without asking if you can buy them a sandwich. Cook someone a meal. Write a letter. Buy a newspaper. Plant a tree.

They only win if we let them win.

I’ll be tuning into John Kelly’s show on Lyric on Friday afternoon. I wonder what he’ll play. He could do worse than a song he sometimes plays, Allen Toussaint’s gorgeous cover of Paul Simon’s ‘American Tune‘.

Or maybe Kelly should just play Sam Cooke again. After all, in the angry, orange face of such terrible times, hope was never more desperately needed.

“It’s been a long, a long time coming
But I know a change gon’ come, oh yes it will.”