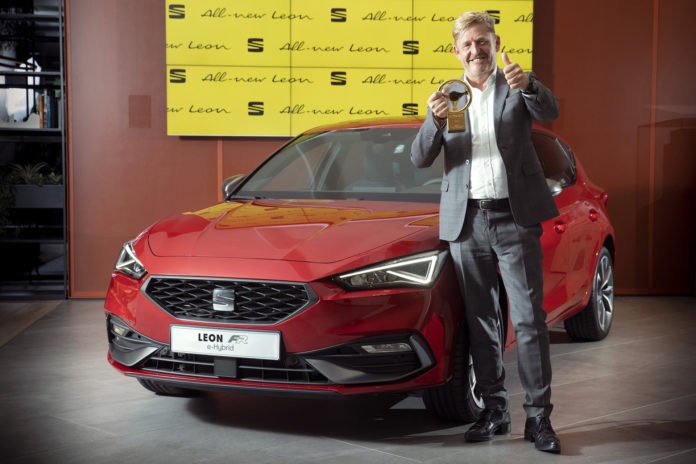 The all-new SEAT Leon has won the much-coveted Golden Steering Wheel Award in Germany. The SEAT Leon 1.5 eTSI model was crowned the winner in the “Best price / product ratio up to 35,000 euros” category by a jury of experts organised by AUTO BILD, Germany’s leading automobile magazine.

When voting on the nominated vehicles, the team of experts considered multiple factors, including how each car drives, entry price and standard equipment.

The ‘Goldenes Lenkrad’ or Golden Steering Wheel was launched by Axel Springer in 1976 and is considered as one of the most important awards in the automotive industry, combining both customer and expert votes.

A total of twelve golden steering wheels were awarded in 2020 and AUTO BILD readers were able to choose their favourites amongst 63 models which were launched from October 2019 onwards.

The three models with the most votes in each of the eight vehicle categories qualified for the finals at the DEKRA Lausitzring in early October 2020.

On the test track, an expert jury including racing drivers such as Sophia Flörsch, Daniel Abt, Mattias Ekström and Hans-Joachim Stuck, evaluated all 24 candidates according to criteria based on the AUTO BILD test scheme.

The all-new SEAT Leon, which launched into the Irish market in June, comes with innovative technologies and is SEAT’s first fully connected vehicle. It will also be the brand’s first plug-in hybrid model when it launches into Ireland next month.

With its combination of impressive design, inspired by the light of Barcelona and technological advancements, the all-new SEAT Leon brings a breath of fresh air into the compact class.

Speaking about the awards, Wayne Griffiths, President of SEAT and CUPRA said: “We are proud that our new SEAT Leon received the ‘Goldenes Lenkrad’ or Golden Steering Wheel and stood out to the experts among the models in its category.

“This award is so rewarding for the team involved in the launch of the All-New Leon, a car designed, developed and produced in Barcelona.

“At SEAT and CUPRA we are currently in the middle of the largest product offensive in our history with models such as the SEAT and CUPRA Leon, the CUPRA Formentor and the future CUPRA el-Born. This award gives us renewed strength to look confidently into the future.”