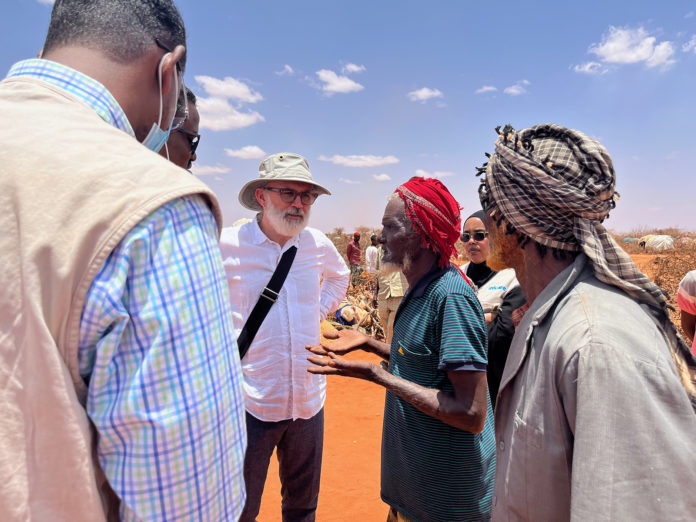 The Irish Emergency Alliance, comprised of seven leading humanitarian aid agencies, this week launched an urgent hunger appeal to save the lives of millions of people at risk of famine in the Horn of Africa.

Four failed consecutive rainy seasons have resulted in parts of Ethiopia, Kenya and Somalia facing their worst drought in 40 years, with more than a million and a half people already forced to leave their homes and villages, often walking for days in search of food and water.

The Alliance – made up of Action Aid, Christian Aid, Plan International, Self Help Africa, Tearfund, Trócaire and World Vision Ireland – said children are dying every day due to the  hunger crisis, and warned that “every minute counts.”

ON THE BRINK OF CATASTROPHE

“I was in Gedo in Somalia last week and visited two of the 200 internally displaced people’s camps across the region which are accommodating nearly a quarter of a million people. They are there because they have no food. The Irish Emergency Alliance needs funds to buy food to stop people starving to death. Many children have already died.”

In a joint statement the Irish Emergency Alliance said it is asking the people of Ireland to give what they can to the emergency appeal.

“There have been warnings for months that unprecedented drought, rising food prices and a lack of funding for humanitarian organisations have been creating a silent emergency in The Horn Of Africa. But those warnings were not heeded and we are now on the brink of an unthinkable humanitarian catastrophe.

“Most at risk are the elderly, and children who lack the physical strength and resources to cope with days and weeks of starvation. When a baby is severely malnourished, even if they survive, they may never be the same again as their developing brains are so vulnerable.”

With drought causing harvests to continue to fail, and nearly nine million livestock dying, each member of the Irish Emergency Alliance has mounted large-scale humanitarian programmes, and have sounded the alarm about the hunger crisis – and potential Famine – in the Horn of Africa. Over 20 million lives at risk as people face acute food shortages and rising malnutrition across Ethiopia, Kenya and Somalia.

HELP THOSE MOST IN NEED

The Alliance said: “The unjust reality is that people suffering in the Horn of Africa, many herders, had no hand in causing droughts driven by climate change. Grain is in short supply, with costs soaring in some of the poorest regions in the world because of a faraway war in Ukraine.

Donations to this urgent appeal can be made through www.IrishEmergencyAlliance.org or by calling 1800 939 979.

October 1, 2022 0
Dairygold Food is one of 55 Origin Green Gold Members for 2022, and one of seven Cork companies to receive the sustainability accolade. The annual...