The Avondhu Newspaper
Home News The National Parks and Wildlife Service teams up with Coillte to tackle... 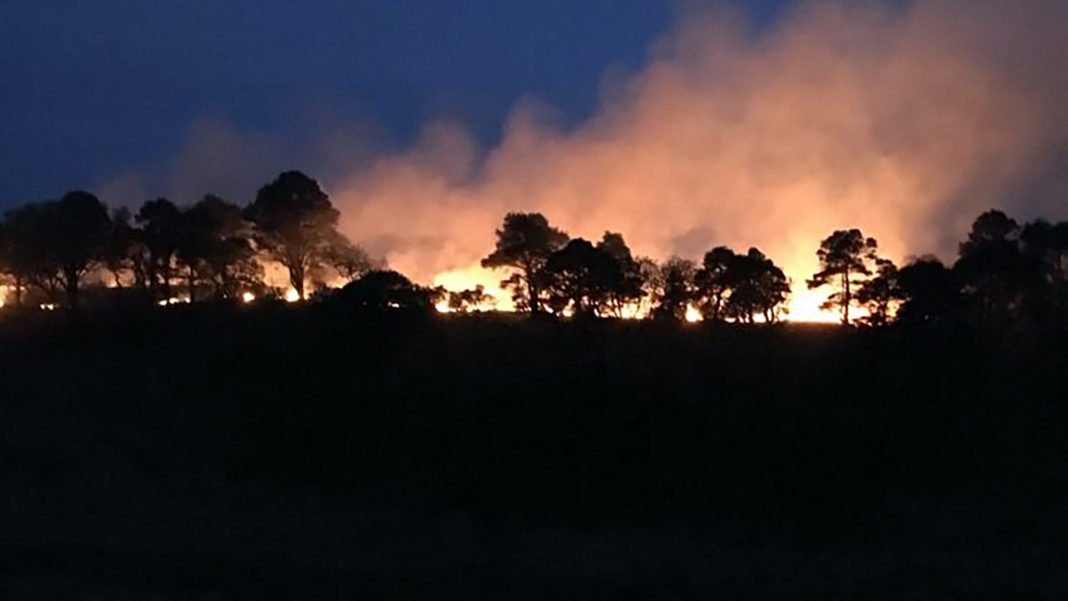 The National Parks and Wildlife Service (NPWS) – of the Department of Culture, Heritage and the Gaeltacht – has announced plans to manage the risk of wildfires through drone technology.

The NPWS will work with Coillte, Ireland’s largest commercial forestry company, to help combat the spread of wildfires.

This pilot is the first of its kind, and will initially be rolled out in the Dublin Mountains.

It comes after an Orange fire warning (the third highest of four warning levels) was issued by the Department of Agriculture, Food and the Marine last week, and remained in place until Sunday, May 19 with more warnings expected during the summer months ahead.

If the pilot initiative is successful both NPWS and Coillte will look to roll out this technology in other areas.

Wildfires are not a natural phenomenon in Ireland and can have a local impact on species that cannot escape, or that lose breeding habitat as a result.

Such impacts are generally fairly short term, but could be very serious for species that are already in decline, such as Curlew. Some plant and moss species may be lost or greatly reduced.

UK research showed that where scrub such as gorse is burned it can have a lasting impact on soils and cause increased erosion which can in turn impact on rivers through increasing siltation of the water, especially if this burning happens repeatedly.

Over recent years, many rural and remote communities are hugely impacted by wildfires, which can cause significant environmental and economic damage.

The Minister for Culture, Heritage and the Gaeltacht, Josepha Madigan TD, said: “I am delighted that Coillte are joining us in this initiative to help tackle wildfires during this high-risk period. It is critically important that every member of society realises the damage that can be caused to our environment, our habitats, property and, indeed, the health and welfare of family, neighbours and the wider community, as well as the responding emergency services.

“It is hoped the use of drones will assist in the early identification of fires and communication of real-time information to my staff when they work with the emergency services to prevent such fires from spreading.

“I would like to take this opportunity to encourage members of the public, (including landowners, farmers and recreational users of publicly accessible land), to act responsibly at all times, to be mindful of their own safety and the safety of others, to be mindful of the need to protect property, both publicly owned and privately owned and to appreciate the value of our natural heritage, particularly in our National Parks, Nature Reserves and designated sites.”

Pat Neville, Coillte Communications Manager, said: “We are delighted to join with the NPWS on their initiative to tackle the growing risk of forest fires. Utilising this technology will allow drones to become our eyes in the skies, and enable our teams to spot the earliest moment a fire starts, helping to save not only the environment but most importantly people’s lives.

“Last year Coillte tackled over 150 forest fires with the largest and most dangerous of these incidents occurring in the Slieve Blooms in Laois and Offaly. In 2018, over 600 hectares of the Coillte estate was damaged by forest fires and it cost the State over €4 million to manage.

“Coillte manages the state’s investment in timber and these are the trees that build homes and businesses so their loss is also a significant economic impact.”

Drones can be equipped with infrared cameras that peer through smoke, as well as sensors for wind direction and other weather variables that affect how fires spread.

They will capture continuous footage of areas deem as high-risk and spot small fires that otherwise could not have been detected until they had become much larger and harder to contain.

With the weather warning still in place, we ask people to remain vigilant and report any fires they see to the local fire brigade.

The NPWS and Coillte recommend the following steps to prevent wildfires: