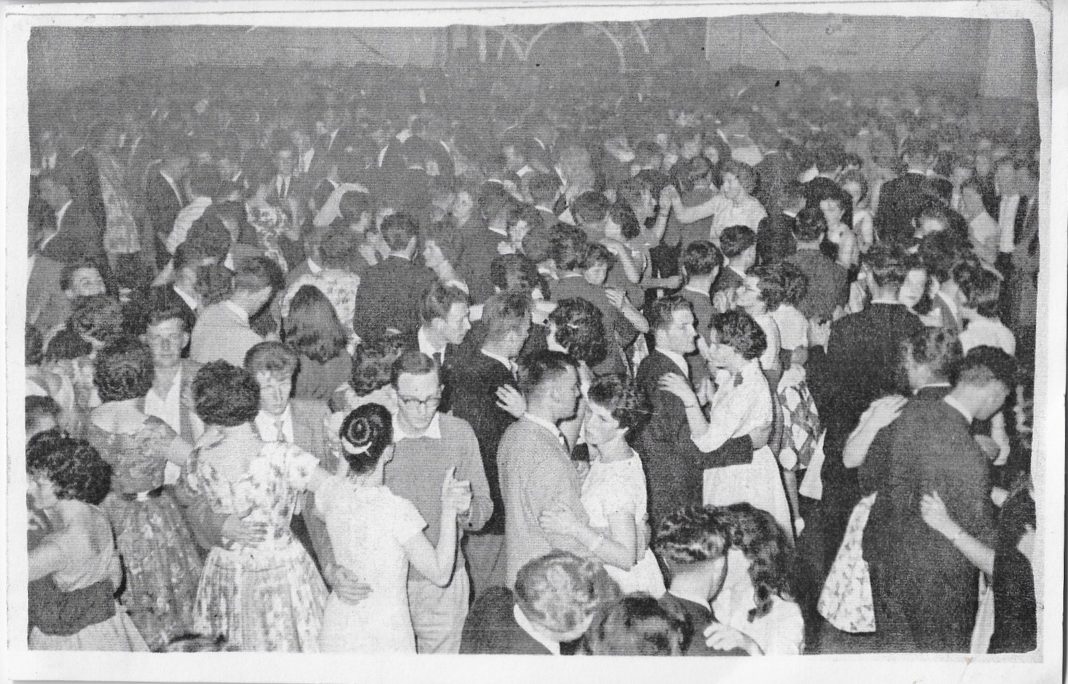 No matter where you travel across the country, when you mention the town of Tallow in West Waterford, one major landmark usually comes up in conversation – The Arch Cinema and Ballroom.

Tens of thousands have danced on the maple floorboards which still hold their own, 64 years later (in what is now known as Tallow Community Centre).

Showband legends graced the stage, Hollywood Blockbusters flickered from the projection room and hundreds of hopefuls met the love of their lives in that very dancehall, all thanks to the genius of the late Willie Fitzgerald.

The building of the Arch Cinema and Ballroom didn’t happen overnight, in fact, Willie’s journey to building The Arch began more than 15 years before the official opening in 1954.

Willie Fitzgerald was a mechanic by trade, as were his brothers Michael and Francie and in around 1938, Willie bought The Market Yard on the main street in Tallow and set up a car and truck garage called Fitzgerald’s Garage. The site also included a house in which Willie, his wife and family lived.

The Market Yard, prior to that, was a space where traders would come to buy and sell goods on a weekly basis in the early 1900s in Tallow and even since that time, the arched entrance to the yard was present, which later gave inspiration for the name – The Arch.

Cars in need of repair would be driven through the arch and into the yard behind while the trucks were fixed on the street in front of the garage.

Sean Burke and Michael Cunningham, both late of Tallow, were employed at Fitzgerald’s garage as was Alice Tobin (nee Ryan) and Mollie Fitzgerald, Willie’s sister, among others.

Willie did a lot of travelling around the country for a man of his time and saw the likes of The Arcadia in Cork and nightclubs in Dublin popping up in the late 40s and early 50s, so in around 1951 Willie got a team of men together to start to work on building a dancehall in Tallow.

The hall has a solid steel structure and with many hands on deck it went up very quickly, despite the fact that all labour was manual, down to the transporting of hand-mixed concrete in wheelbarrows up and down ramps to reach the highest points of the huge two-storey construction.

The ribs for the maple sprung floor were laid by Tom Sheehan but the floor itself, for the most part was laid by Willie’s brother, Michael. The floor has genuinely lasted the test of time and still shines as it did back in the early days, holding the secrets of the past in the wood.

All the while, the garage, the petrol pumps and the parts shop were still in operation but Willie managed to keep it all going.

The Arch Cinema and Ballroom opened it’s doors on Sunday June 20, 1954 with a stellar line up. The well-known Tallow showband, the Brideside Serenaders Orchestra, were the chosen entertainers for the main dance of the night and the midnight cabaret included the internationally renowned tenor from Tallow, Frank Ryan alongside Chris Sheehan Baritone and the comedian Denis Harrington. Members of the Bohemian Players were also performing variety entertainment.

From that night forward The Arch boomed and drew crowds from far and wide over the course of the next 30 years.

Brian Fitzgerald, Willie’s son, was only seven years of age when The Arch opened and he spent every spare minute of his youth working there.

Over the years, there were several local faces worked there as the hall could have anywhere over 500 people in on any given night, even exceeding 1200 people through the doors on one famous horse fair night.

Pat Kenneally, Willie’s brother-in-law, was the first man on the door and was later joined by Fermoy heavyweight champion boxer, Mick Jordan, along with others.

Anthony Grey manned the gents cloakroom while Tom Beecher, Mollie Fitzgerald and Brenda Kenneally could turn their hand to any job. Willie O’Hara was also a jack-of-all-trades in the ballroom, even taking on the role of MC for the ceili dances.

After some years, Willie Fitzgerald knocked down some of his own house to build-on a supper room onto the hall. Benny O’Hara was mainly stationed in the supper room selling sandwiches, tea and coffee and cakes. He also spent some nights at the mineral bar selling cigarettes, sweets, minerals and at one point, special glasses of ice-cream with cordial and a wafer.

The Arch played host to some of the biggest names of the time including Bridie Gallagher, ‘Brendan Bower and The Big 8’, ‘Morton Frazer and His Harmonica Rascals’, Alma Cogan, Anita Norry and many more, with the local heroes like ‘The Bridesiders’ and ‘The Prendergast Family Singers’ taking to the stage regularly and drawing huge crowds.

Dickie Rock also made a number of appearances on the stage, the most famous occasion being in 1966, the night he returned home to Ireland from the Eurovision in Luxembourg where he finished 4th with ‘Come Back to Stay’.

In the early days, Brian Fitzgerald’s mother would cook a fry for the visiting bands with the help of Alice Tobin in the first year, and many of the band members that Brian Fitzgerald has met since The Arch closed down reminicised on how much they looked forward to getting the fry in Tallow before a gig.

Of course, there was more than just famous singers and bands on the stage as comediens and fit-up theatre shows also drew huge crowds to The Arch. Acts like Maureen Potter, Jimmy O’Dee, Jack Cruise and even Joe Lynch from The Riordans entertained the masses in Tallow but the most unusual visit of all was from the American professional boxer, Joe Louis.

‘THE HAND THAT SHOOK THE WORLD’

Tallow was a hive of excitement in ’63, as the world famous, Joe Louis, arrived into the town. Louis is considered to be one of the greatest heavyweight boxers of all time but it seems after his retirement, he fell into financial difficulties and embarked on a tour of the dancehalls with Larry Gogan as MC for questions and answers sessions from the stage.

A well known story in Tallow goes that, local character Paulie Harty, approached Louis on the street in Tallow and shook his hand saying: “I want to shake the hand that shook the world.”

Brian Fitzgerald has a piece of film footage, taken on the significant day and Louis is relaxing in the Fitzgerald’s family sitting room talking to Brian’s parents and having a cup of tea.

Fermoy’s Mike Jordan remembers the day well as he idolised the champion boxer and was lucky enough to have a photograph taken with him.

Throughout this time, the cinema was in operation with Oklahoma being the first ever film shown there in the late 1950’s.

The silver-screen, purchased from RCA Electrics covered the full size of the stage and the two Arc Projectors were operated from the projection room on the second floor. Julian Fitzgerald was the main projectionist for the films, through Brian spent many hours operating them in the later years.

The films, came on 35mm reels, and as Hyde’s Regal Cinema was already in Tallow, it was difficult to keep the crowds coming in, especially when TV entered the home in the late 1960s.

There were gallons of memories made in The Arch and it was among the best loved ballrooms in the area in its day. The Christmas Night dance was often the most memorable of the year, as it was the only dance in this area on Christmas Night. Tallow Horse Fair night too had an extra special charm and many faces smile with a glint in their eye when they recall their dancing days in The Arch.

Willie refused to allow drink to be sold in the dance hall as he felt it was bound to spell trouble and so, the crowds slowly drifted away to frequent at Redbarn and the Top Hat and new ballrooms that had drink on sale.

As Ireland’s social trends changed, the popularity of ballroom dancing began to decline and Willie Fitzgerald decided to hand over The Arch to the community of Tallow in the late ’80s.

The hall is now as busy as ever with social dancing every second Friday night, activities for young people, theatre, shows, parties and more.

The physical arched hallway still leads your way, just as it did back in 1954.