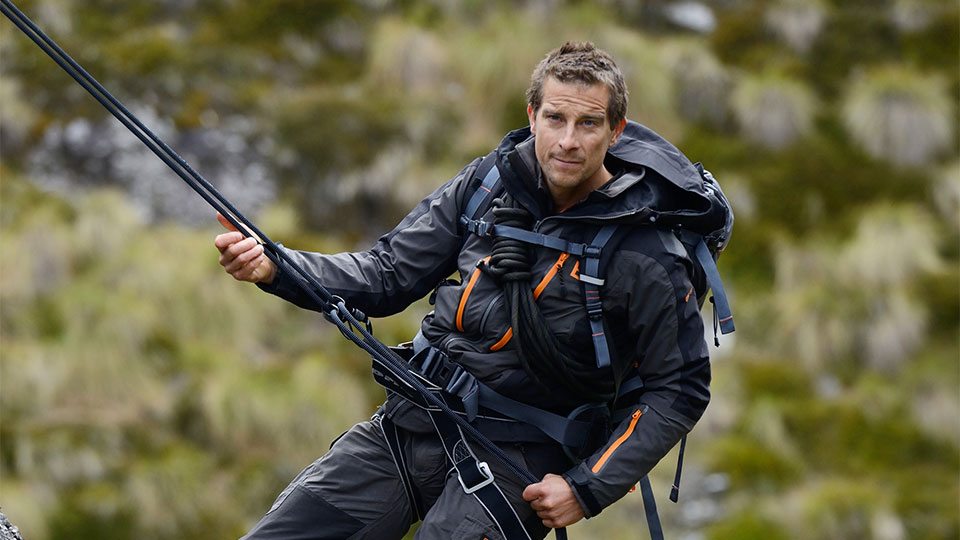 He has served in the army. He has led dare-devil expeditions. He has taught extreme survival skills – appearing with celebrities in his ‘Mission Survive’ TV programme.

But all the while he knows how to turn these same confrontation skills – the ones that he uses against physical danger – against “inner turmoil”.

Accustomed to ‘wilderness’ exploits, his first-name suits him: ‘Bear’. But Bear Grylls can acknowledge (to Fergus Ewbank) an inner strength: “My faith is important … I’ve learned that it takes a proud man to say that he needs nothing – and I’m not like that … I’ve also learned that there aren’t many atheists in the death-zone of Everest” – ‘near death’ moments can draw a person closer to God.

Bear is said to push his body and mind to their ‘absolute limits’. His is the macho world of ‘extreme’ physical challenge. And still he admits that it is the extreme degree of his religious conviction (‘faith’) which powers that push to the edge.

For him, ‘faith’ or ‘belief’ seems to be  something like: self-confidence carried to the ultimate – a sense that, if everything originates from a loving God, then each person is of unique and infinite value.

“My faith”, he declares, “has been the strongest anchor in my life, and the best of guides in the dark hours that we all go through”. Not that he wore his faith on his sleeve; indeed, there always seems to have been a fear that his belief might be either too private or too public. “I was afraid to talk about it in the past, as you’re always afraid of ridicule – or it being seen as a sign of weakness. But I’m no longer afraid to say that I need my faith. It’s a real back-bone in my life. So if I’m asked, I am more than happy to talk about it…”

Faith is: friendship with God

“I had a natural faith as a kid. I just believed in God, and that God was good. It was very child-like and simplistic”. Then, at 16, the bottom fell out of his world with the death of a beloved godfather. “I remember saying a prayer asking God to be with me – and really that is a prayer of salvation. That was the start of my faith there.

To have a religious horizon (he seems to say) is about being at home in all of God’s world, and with all of God’s people. If you have that back-drop behind you – then you can put yourself through as many endurance-competitions and crisis-scenarios as you like : you know that these are only part of the whole.

For a person that we would categorize as a clearly Alpha Male type, it is amazing to hear Bear reveal how he factors-in a part of each day for the spiritual. “I have a little daily readings book”, he tells us; “I read about faith and life”. And “to remind me of what’s important”, his secret is: “I always try to start the day on my knees”.

It is Bear’s unwavering view that in every human life – not just in a mountaineer’s – there are summits to conquer: That determination, that “never-say-die attitude”, that “fire inside – lies at the heart of a great survivor”.

We notice here in the adult’s testimony how he is now more at ease in opening-up to others about the faith-dimension of his life. He is now perhaps more ready to welcome the wider ‘community’ element of religion; this can always, of course – in time – come to include a level of acceptance for the church-worship aspect of community. But the latter will remain only one part of the rest.

He prays – Who would suspect?

Once again I notice that what the faith-component of his life offers him is: a background of basic personal security. Certain of that, he has the confidence to professionally plunge himself into risk-situations.

It is for the same reason, I imagine, that he manages to avoid any over-emphasis on will-power, on ‘pulling oneself up by one’s own boot-straps’. Instead, religion is for him a fall-back, in the best sense.

There is the assurance of ‘having one’s life together’ – because one is ‘held’; because it is a loving God who is doing the holding; because the total experience is one of ‘peace’ and of ‘home’.

Finally, I must repeat my admiration for the discipline – part of any athlete’s training – with which Bear Grylls keeps hacking out time in his busy schedule for prayer and for inspirational reading.

He must have often meditated on the Bible passage where Paul holds up the dedication of the committed athlete as a model for the Christian who is in serious ‘training’ for heaven : “Every athlete in training submits to strict discipline. He does so in order to be crowned with a (victory-) laurel that will not last; but we do it for one that will last forever”.

The Irish Catholic journalist sums it all up well: Bear Grylls’ “willingness to explore dangerous and uncharted territory – and the faith he so often turns to during these times – works well as a symbol for our own religion in the face of personal hardship”.