Home All Opinions My Own Star Trek has always shown the present, refracted through a fictional future 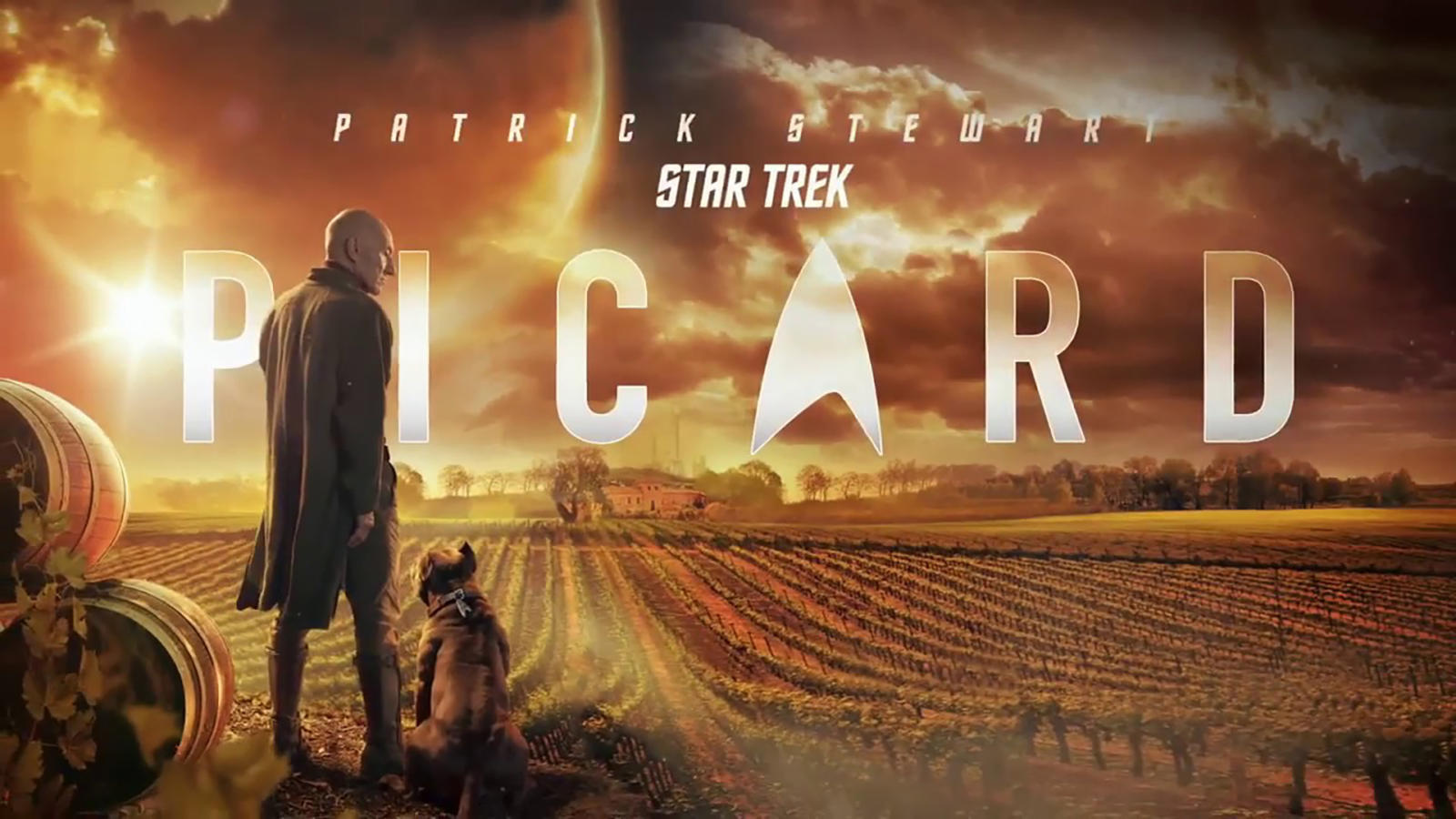 As Jean-Luc Picard returns to TV screens after quarter of a century, Donal O’Keeffe reflects on why Star Trek has always said far more about our present than it ever did about the future.

Patrick Stewart is not ageing the way the rest of us are.

The 79-year-old Yorkshire man, who owes his first name to the anti-Irish nickname ‘Paddy’ given to his father for his violent temper, looks as fit now as he did when he sat in the Captain’s chair of the USS Enterprise NCC 1701 D in the first episode of Star Trek: The Next Generation, 33 years ago.

Stewart launches on Amazon Prime Video this week Star Trek: Picard, a new series focussing on the continuing adventures of the character which made the world-class Shakespearian actor a global star.

It’s been 18 years since last we saw Picard, in the horrible Star Trek: Nemesis (2002). That film saw a mysterious interloper, Shinzon, played by Tom Hardy – eventually revealed to be Picard’s own clone – ascend to the praetorship of the Romulan Empire and psychically rape Counsellor Troi (Marina Sirtis).

I did say Nemesis was horrible.

Nemesis ends with Picard killing his clone, and Brent Spiner’s android Commander Data giving his life to save Picard and the United Federation of Planets. It was so bad it finished the sequence of films spinning out of Star Trek: The Next Generation, and it almost killed the entire franchise.

When last we saw Captain Picard, at the end of Nemesis, the year was 2379, and his stalwart first officer Commander William Riker was leaving the USS Enterprise, alongside his wife Troi, to take command of the USS Titan.

When last we saw Picard’s era, the year was 2387, and Ambassador Spock (Leonard Nimoy) had failed in his desperate attempt to save the Romulan home-world from a supernova. Spock would find himself blasted back in time, alongside Romulan terrorists, creating an alternate timeline, and – with it – JJ Abrams’ rebooted series of films, beginning with 2009’s Star Trek.

Star Trek has always spoken at least as much about the days in which it was created as the days in which it was set. Thus, the original series (1966-1969), which became a 1960s icon tackling contemporary issues such as racism, sexism and nationalism, was always about the post-Kennedy Space Age optimism which would eventually put a man on the moon.

The Cold War-era show depicted a future where the Enterprise had a Russian navigator (Walter Koenig’s Chekov) even as Starfleet clashed with the Russian-and-Chinese-analogue Klingon and Romulan empires.

When Nicholls thought about quitting, the Reverend Martin Luther King reassured her of her importance as an African-American woman on TV during the Civil Rights Era.

When Captain Kirk’s crew graduated to films, they reached their greatest success with their fourth outing, The Voyage Home (1986). Mr Spock’s alter ego, Leonard Nimoy, a committed environmentalist, directed and co-wrote a family film with a message all-the-more relevant today. The film known to all as ‘the one with the whales’ became a massive hit, critically and commercially.

The sixth film, The Undiscovered Country (1991), the last to feature all of the original series’ stars, was based on Nimoy’s suggestion that Star Trek look at what might happen if “the Wall came down is space”, and featured Klingon Chancellor Gorkon (David Warner, channelling Mikhail Gorbachev) suing for peace in the wake of a Chernobyl-like disaster on one of the Klingon home-world’s moons.

(By the way, Spock’s for-the-greater-good forced mind-meld with his traitorous protégé Lieutenant Valeris (Kim Cattrall) felt as horrible three decades before #MeToo as it does now. As with Shinzon and Troi 11 years later, psychic rape is just a metaphor, and it’s disturbing to watch Spock, a beloved, heroic character, overpower Valeris.)

Star Trek: The Next Generation launched on TV in 1987 and took a while to escape the gravity well of its predecessor, before eventually becoming a huge success, going on to spawn four films, one of them excellent, and three TV spin-offs. A century after Kirk’s swashbuckling time, a new Enterprise explored the galaxy under a thoughtful, diplomatic captain.

When Starfleet planned to use the robotic Data as the template for a race of artificial beings, Picard stepped forward to defend the rights of his second officer as a sentient being. The Measure of a Man (1989) became the first truly important episode of TNG, giving Stewart and Spiner ample room to show their acting mettle. Jonathan Frakes, an underestimated actor, shines as Commander Riker, forced to argue against his friend Data. African-American actor Whoopi Goldberg is devastatingly effective as Picard’s alien counsellor Guinan, seemingly unconcerned at the notion of a slave race.

In an age of relative peace with the Klingons and Romulans, a new adversary was needed for the show. The hyper-capitalist Ferengi were too innately comedic to work as an effective foe, so a far more terrifying threat emerged in the cyber-zombie form of the Borg.

The two-part The Best of Both Worlds (1990) saw Picard assimilated into the Borg hive-mind and – against his will – forced to act as its spokesman as it set to out to absorb all of humanity. Picard would be forever scarred by this experience, and Patrick Stewart is never better than when portraying Picard’s hatred and fear in the wake of this brutal assault.

The Borg would return in the second TNG film, First Contact (1996). Directed by Jonathan (Riker) Frakes, it is by light years their best film, and is perhaps the perfect Star Trek movie. The Borg attack not just Earth, but via time travel attempt to undo the entire history of Star Trek, while tempting Data with, well, sex. Stewart gets to be an action hero while showing Picard’s vulnerability.

The superb spin-off Deep Space Nine (1993-1999) brought war and religion to the galaxy, and was prescient in its depiction of the Earthly paradise of the 24th century riven by paranoia when undermined by faceless terrorists. Voyager (1995-2001) introduced political discord to the previously-harmonious Starfleet, but struggled to find a voice independent of TNG, with its stand-out stars Robert Picardo as an obnoxious holographic doctor, and Jeri Ryan as the icy former Borg Seven of Nine.

The mediocre Enterprise (2001-2005) was set a century before Kirk’s time and took a post 9-11 darker turn when Earth suffered a devastating alien attack.

In the streaming age, Discovery (2017-) is set, initially anyway, a decade before Kirk’s five-year mission, featuring all-out war with the Klingons, and its fallout, and is a darker and more cynical show, depicting a crueller and less idealistic Starfleet. On the plus side, after decades of LGBTQ invisibility on Star Trek, Discovery features an LGBTQ couple, while Star Trek: Beyond (2016) gave Sulu a husband and daughter.

And now Star Trek: Picard (2020-) has lured back Patrick Stewart back to his signature role. Star Trek has always been about the present, refracted through the sci-fi lens of a fictional future. Post Trump and Brexit, that future has darkened.

The year is 2399, and Jean-Luc Picard has retired to his family vineyard in France, haunted by the death of Data and the destruction of Romulus.

Trailers suggest Romulan militarists are weaponising Borg prisoners, while Data’s death has apparently allowed the development of a series of Data-like androids. A terrorist attack on Mars has left the Federation isolationist and unwelcoming.

When a desperate young woman, possibly a former Borg, begs Picard for help, he finds himself denied Starfleet aid, and so he assembles a band of renegades.

Although his world has changed in ways that disappoint him, although the government he served all his life has become cruel and feckless, and although he has more than earned a peaceful retirement, Jean-Luc Picard is still willing to lay down his life for others.

Patrick Stewart and his fans would have it no other way.