Home All Opinions My Own ‘Sherlock’ proves that how we get to Art is not the important... 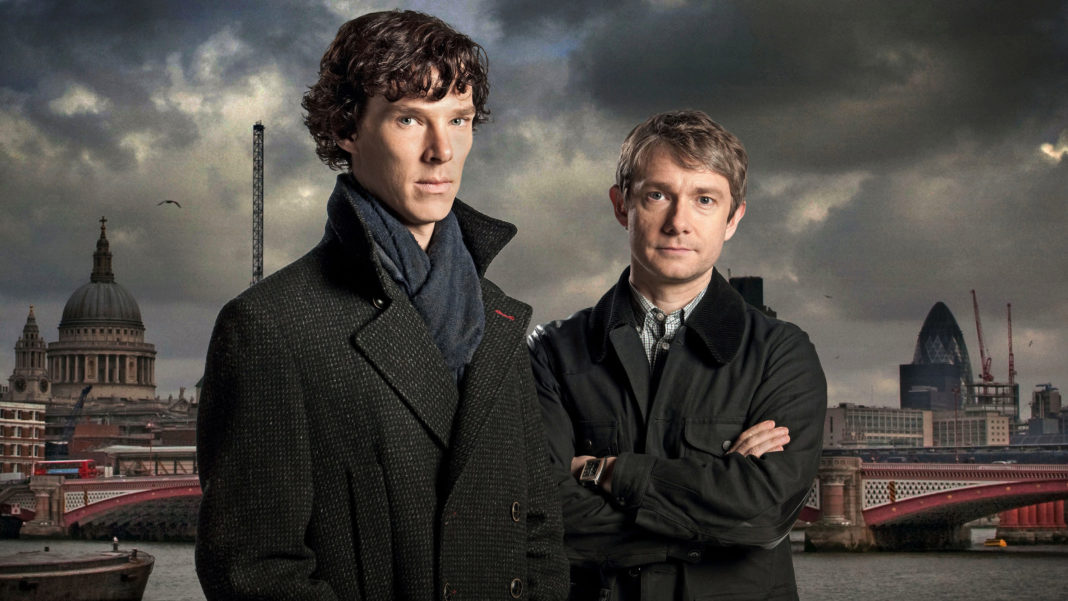 “Sherlock? Well, I know the BBC published a book on the making of the series, and there was a collection of the stories that the producers put together.

“It’s, it’s the stories I was interested in. Maybe a collection of the Sherlock stories.”

I was in Waterstones in Cork over the Christmas. It was quieter than it had been the day before Christmas Eve, when all it lacked was a helicopter on the roof to complete the re-enactment of the Fall of Saigon, but it was still very busy.

I had picked up “Sapiens: A Brief History of Humankind” by Yuval Noah Harari (really good) and Flann O’Brien’s “The Various Lives of Keats and Chapman” (wonderful) and – because I wanted to wait until the queue lessened and because I’m a gigantic nerd – I was standing in the fantasy section looking at a Doctor Who comic.

The shop assistant was talking to a customer as they walked toward the crime section, just around the corner from where I was noting that the Eighth Doctor collection shows McGann’s character wearing his ‘Night of the Doctor’ outfit. (If that makes no sense to you, then congratulations, you’re not as sad as me. But don’t let me put you off the Doctor. Wonderful chap. All of them.)

The customer seemed uncertain, maybe even embarrassed, but the assistant was friendly, chatty and passionate about his subject.

It became clear to me as I eavesdropped that the customer had watched ‘Sherlock’ on BBC1 the night before and had decided that he’d like to get to know a little more. I also came to the realisation that the customer didn’t seem to know Sherlock Holmes dates a little further back than the 2010 modern re-imagining by Steven Moffat and Mark Gatiss (two men who also know a thing or two about Doctor Who…)

“You’re looking for the original Arthur Conan Doyle stories,” the assistant said. “They date back to the late 1800s and they’re really brilliant. Yeah, we have them here. Some excellent collections actually, and great value.”

I found myself smirking at the idea that anyone would think that Sherlock Holmes was a 21st century creation. I sneered at the thought that anyone could not know about 130 years of literary history. (I never pretended I was nice.)

But then I got to thinking. About books, about reading. About Sherlock Holmes. See, I can’t remember when I first read Conan Doyle.

I actually can’t remember those stories not being part of my life. I can’t remember not loving hansom cabs and thick fogs swallowing Victorian London and the street urchins of the Baker Street Irregulars saying “It’s a right peasouper and no mistake Mr Sherlock Holmes”. (I might be misremembering that last bit.)

Impossible mysteries and monstrous hounds and breathtaking genius. “You see, but you do not observe.” Holmes and his unparalleled brain, and John Watson and his bravery and his indefinite number of wives, and Mrs Hudson and Professor Moriarty and the Reichenbach Falls, and Sidney Paget’s beautiful illustrations. The Basil Rathbone films and later Jeremy Brett’s astonishing portrayal of Holmes. Yes, I went to 221b Baker Street the first time I was in London. I may have even bought a deerstalker hat.

You see, I was very lucky. I grew up in a house that always had books and I have a mother who taught us how to read and who encouraged us to love stories. I devoured comics and books and newspapers.

When I was young, I had my head in the clouds most of the time. Some might call that a wasted life, but I lived impossible lives thanks to reading. I was there as Jim met Long John Silver and when Huck and Tom set out on their adventures. I knew Asimov’s robots and Bradbury’s Martians and I loved poor Gulliver’s travails too.

I came to literature sideways, the same way everyone does. Just as I came to music.

We all have magpie minds. That’s what’s wonderful. We pick at the shiny bits and we follow our passions. That’s why we are all of us fascinating, and that’s what makes this world worth staying in.

I remember one night a few years ago, John Creedon read out a message from a listener to his RTÉ Radio 1 show. The listener had taken issue with Creedon playing Tom Waits’ Martha. If I remember, the listener accused Creedon of playing boring, hackneyed songs. I think the listener said something along the lines of “We’re all sick of Tom Waits’ Martha”.

I didn’t know Creedon then, but he sounded just a little upset by the message, so I texted the show to tell John that there was a listener somewhere out there who had just heard ‘Martha’ for the very first time and it was thanks to him, just as it had been thirty years earlier the first time I heard ‘Martha’.

No matter how old the work of art, no matter how over-familiar it might seem, it’s always someone’s first time.

For someone, just like that customer in Waterstones, ‘Sherlock’ on TV now is the gateway drug that introduces them to a whole new universe of dreams and stories and ideas.

‘It has long been an axiom of mine that the little things are infinitely the most important,’ said Holmes.

How we get to Art is not the important bit.

I guess it’s just up to each of us to decide whether we want to be the person evangelising about the world of wonder that’s just the turn of a page away or the dick sneering at them from behind a comic.

The finale of ‘Sherlock’ airs on BBC1 on Sunday night. Arthur Conan Doyle’s ‘Sherlock Holmes’ stories are available in good bookshops and are thoroughly recommended.