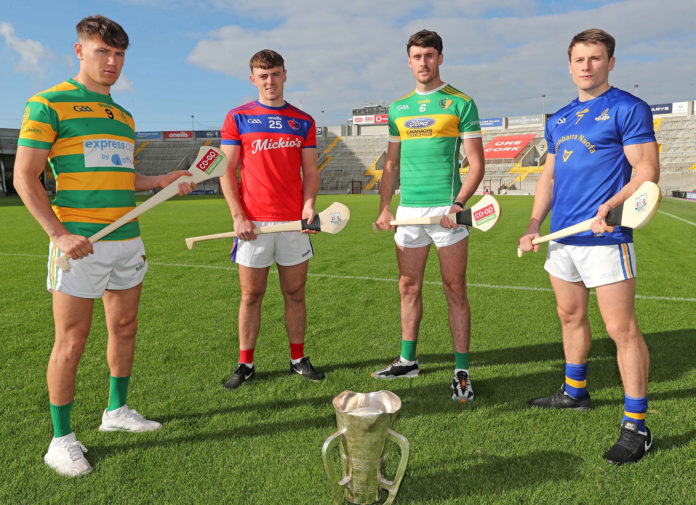 This weekend sees the semi-finals of the Co-Op Superstores Cork Hurling Championships 2022 taking place across the county.

A double-header of Premier Senior hurling semi-finals at Páirc Uí Chaoimh on Sunday promises to be a superb afternoon at the Páirc. First up will be Erins Own v Blackrock at 2pm, followed by St. Finbarrs v Newtownshandrum at 4pm.

Ahead of the games, Head of Retail at Dairygold, John O’Carroll was joined by players from the four teams along with Pat Horgan, vice chairperson Cork GAA and Cork GAA CEO Kevin O’Donovan.

“There’s lots of excitement and anticipation this week across our 18 Cork stores ahead of this weekend’s semi-finals. Our stores just like GAA clubs are at the heart of local communities across the county and we are delighted to once again support all clubs who took part in this year’s Cork County Hurling Championships. We look forward to a weekend of exciting hurling action and send best wishes to all clubs involved,” John O’Carroll said.

Speaking about this weekend’s games, County Vice-Chairperson, Pat Horgan, said, "It is a pleasure to take this opportunity to wish all four teams the very best ahead of this weekend's semi-finals, and to compliment all the clubs who contributed to our most exciting championship in years. I'd also like to thank Co-Op Superstores, who have been fantastic sponsors and we look forward to the continuation of this partnership in the years ahead".

Cork GAA look forward to welcoming all supporters and wish each team the very best.