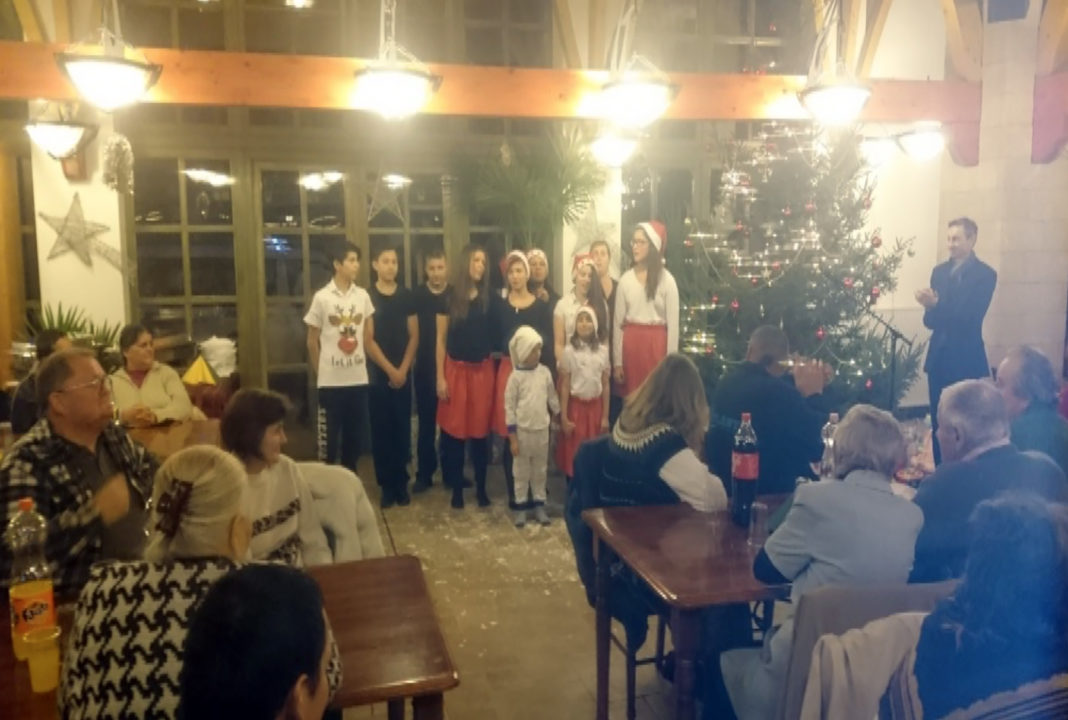 On the 18th of November, Brian Jocobsen who lives in Briscoe Terrace in Fermoy, got a phonecall from an old friend of his from Denmark, asking him to check his email which he did.

In the email were two tickets to Bonnya in Hungary. Brian naturally asked what was going on to be told by his friend that he wanted Briana nd his partner to come to Hungary to help him with a Christmas party in the village. Here, Brian takes up the story:

"Bonnya is a small village in the county of Somogy in Hungary and holds a population on 309 people, the village has almost no funds and this summer they had to cancel the summer festivities due to lack of funds and when he heard that now, they also had to cancel the Christmas party, he felt that he had to do something. So Timo Schroeder and his business partner Peter Knudsen, decided that they would sponsor the food and drink for the Christmas party and when he asked me for help, I thought that there must be something we can do here in Fermoy. The result was that I asked a few friends if they might have some toys or some clothes for kids that they could spare."

Brian said that within a few weeks, he had toys and clothes – more than 20 boxes of them, but then realised he had a new problem – how on earth would he be able to get all the boxes to Hungary?

"Well, I took a chance and wrote a letter to Aer Lingus Cargo department telling them of the problem I was in. The next morning I had an answer back telling me that they would gladly help if I only could get the boxes up to Dublin as fast as possible since they would have to fly them out on several planes due to the amount of them that I had amassed. That was great news, but that also created another problem for me because I needed extra transport from Fermoy to Dublin.

"Thankfully, help was closer than I thought as so often in Ireland, many good things gets sorted over a pint and in my local I was telling Ray Murphy about my problem and without hesitation he said: I'll cover that. Was I grateful or what? So, off to Dublin with the first load."

Brian said the help they got in the Airport from Aer Lingus was outstanding and I would like to say that without their help we simply couldn’t have made this possible. Hwe extends a huge thanks to Carol Griffin the Cargo reservations Manager in Aer Lingus and of course the helpful staff at the cargo bay.

When Brian started this 'collection', he thought that he would have problems getting things for the kids so he thought he would take a chance and wrote IKEA to see if they would be able to help in any way. And they sure enough they did.

"From IKEA I got a big box full of colour markers, scribble pads, puzzle and story books and a ton of soft toys, so now they are fully equipped in their small creche in Bonnya, So, happy days and a huge thanks to Nuzhad Chagan and Marie Brennan from the marketing department in IKEA Dublin.

"Finding the cargo company where the boxes had arrived was easier said than done but finally we found it and could actually see our boxes in the warehouse and then the fun began. I have now learned one very important lesson, don't ever send something to Hungary with a company name on, because if there is a company name on a box they need a company stamp to release the item."

After two hours of showing passports, drivers licences, emails etc., Brian got on the phone to Dublin to Aer Lingus Cargo and five minutes later they had our boxes, again thanks to Carol.

"Arriving in Bonnya was the mayor and some of her staff to help us unload and start the big task with dividing up everything to all the families. Then finally, the big day arrived and we were all ready around the tree.

"The mayor spoke about the hard times they all are going through but by standing united and helping each other they will get through it. She thanked Timo, Peter, Brian and the people of Fermoy for bringing Christmas to Bonnya this year and said everyone who had made this possible were forever welcome in Bonnya. Local children then entertained with songs and dance and then she started to hand out the presents from Fermoy.

"All in all it was a fantastic evening and I am very proud that I could be a part of it. I want to express my deepest gratitude to all the people in Fermoy who helped me and Ann to give all these fantastic presents to the people in Bonnya."

Brian wishes to extend his thanks to Noreen Cody and her daughter Caitlin, Tricia McSweeney, Tracey Wilson and Martina O’Brien for all the toys and clothes, Hanley's Newsagents, Justin Hanley for pencil cases and school equipment, to Faber Castel for donation of all the shipping boxes, to Brendan Carey for finding the boxes for me and his brother Dave Carey for offering back-up on transport if everything else failed; to Noel Crawley (we will soon have a GAA team in Bonnya), to Joe Murphy Menswear for providing transport of all the boxes from Fermoy to Dublin; to former mayor William Hughes for helping me with his expertise in collecting and for helping me with getting all the boxes to Dublin. Also a big thanks to the anonymous lady in Dealz who, out of the blue, asked me if it was true that I was collecting for the children in Bonnya and proceeded to give me 10 drawing books and pencils.

"Last but not least, thanks to Timo Noe Darling Schroeder (my old Navy buddy from Denmark) and his business partner Peter Knudsen for financing our trip and hotel to Bonnya and above all, financing the Christmas dinner and drinks for all the people there. Finally a big thank you to all the people in Fermoy from Timo and Peter who say their next project will be to convert an old house into an internet education place for the people of Bonnya."

Brian and Ann wish all readers of this small true Christmas story, peaxce sand happiness for the New Year.