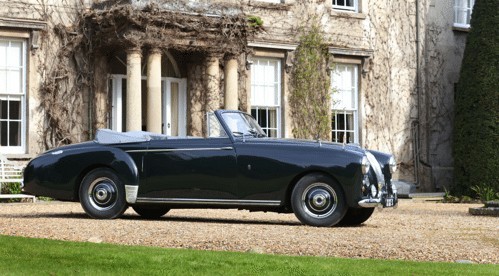 The car that won Aston Martin Lagonda Ltd its first Royal Warrant, the magnificent 1954 Lagonda 3 Litre Drophead Coupe that H&H will be offering for sale by public auction on April 20th 2016 at IWM Duxford, Cambs was built to the special order of HRH, The Prince Philip, Duke of Edinburgh.

Finished in a bespoke shade of Edinburgh Green matched to Grey leather upholstery, the luxurious four-seater Convertible was 1 of just 20 MK1 cars made and used by The Duke of Edinburgh for personal transport up until 1961.

A regular at The Thursday Club where fellow members comprised the likes of Baron Nahum, David Niven, Peter Ustinov and Francis Bacon, Prince Philip drove the Lagonda to Cowdray Park for polo matches and Cheam prep school to drop off Prince Charles.

Prince Philip took the Lagonda on a tour of The Commonwealth in 1956-1957 and so there are numerous photos of it at the 1956 Melbourne Olympics and elsewhere. The 3-Litre is also featured in several Pathe News films and countless newspapers and magazines from the period.

“There is an amusing story about Prince Phillip driving Her Majesty through London in this car and being held up by a policeman on point duty directing traffic.”

Damian Jones, H&H Sales Manager, comments: “This car is part of our history. The accompanying paperwork beggars belief. There is an amusing story about Prince Phillip driving Her Majesty through London in this car and being held up by a policeman on point duty directing traffic. When the policeman saw who was in the Lagonda he did a double take and swiftly waved them on.”

As well as such non-standard extras as a power hood and floor-change gearbox (both subsequently adopted for later production examples), the 3 Litre Drophead Coupe featured an extra vanity mirror – reputedly for HM, The Queen to adjust her hat – and a radio telephone. The latter necessitated The Duke of Edinburgh being allocated his own radio frequency by The Admiralty.

Able to speak to Buckingham Palace via a Pye relay station in North London, Prince Philip apparently took delight in making surprise calls to his Wife and disguising his voice when in conversation with Prince Charles or Princess Anne.

Doubtless keen that the Convertible should never ‘fail to proceed’ in public, Aston Martin Lagonda dispatched staff to The Royal Mews and Windsor Castle on a sometimes weekly basis during The Duke of Edinburgh’s seven-year ownership.

Loaded aboard the Royal Yacht Britannia for Prince Philip’s Tour of the Commonwealth during 1956-1957, the 3 Litre Drophead Coupe was greeted in Australia by one of the firm’s most senior engineers, Tony Tocock, to ensure that it did not disgrace itself at the Melbourne Olympics. Dunlop similarly went to great pains to ensure that all its Australasian branches were stocked with suitable tyres.

A spirited driver who held the unofficial record for the 98-mile run between Bath and London whilst still a Naval Officer, The Duke of Edinburgh was not averse to ‘making up time’ aboard the Lagonda if late for an official engagement.

The car with which he and The Queen opened the M1 motorway, the 3 Litre Drophead Coupe made quite an impression on those who encountered it including a traffic policeman who once inadvertently held the Royal Couple up and was suitably grateful when his faux pas was greeted with good-natured laughter.

The Alvis TD21 Drophead Coupe with which Prince Philip replaced the Lagonda in 1961 has yet to be released and is currently on display at Sandringham. Indeed, the 3 Litre Drophead Coupe is thought to be the only one of his personal cars (as opposed to pool cars to which he had access) to be in public hands.

The Lagonda’s second private keeper, Mr Rogers of Newmarket, wrote to Buckingham Palace on several occasions in an attempt to acquire it but a direct sale was declined.

The vendor was recommended to Mr Rogers as a suitable custodian by Aston Martin Lagonda Ltd because of the number of significant Lagonda motorcars he had owned (such as one of the ex-Works 1939 Le Mans Team Cars) and became the Convertible’s third private owner in 1977.

A switch on the dashboard and aerial are all that remains of the radio telephone system but The Queen’s additional vanity mirror remains in situ as does almost all the original leather upholstery.

In addition to a bodywork restoration and repaint in its correct shade of Edinburgh Green undertaken during 1990, the Lagonda was treated to a thorough engine overhaul, back axle refurbishment and the fitment of overdrive some ten years ago.

Part of a significant private collection for nigh-on four decades and reunited with HRH, The Duke of Edinburgh at a REME event in 1999, this singularly historic 3 Litre Drophead Coupe has recently been serviced and is thus said to be ‘on the button’.

Offered for sale with copy factory build sheet and service records citing HRH, The Duke of Edinburgh as its purchaser plus a wealth of fascinating documentation, it is estimated at £350,000 – £450,000.