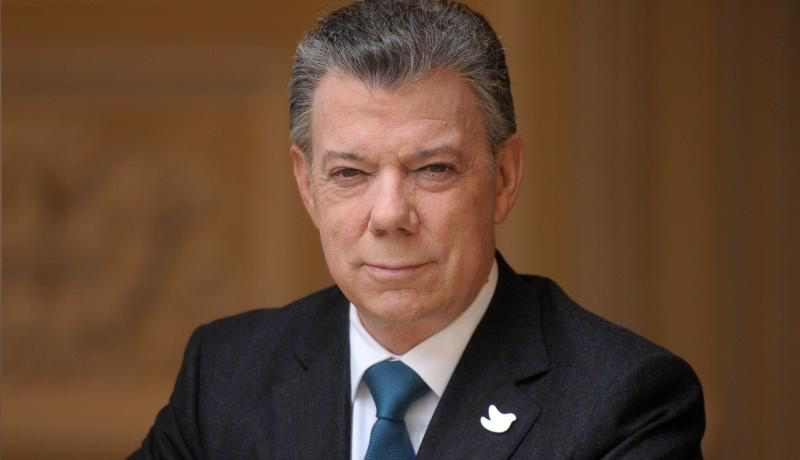 Colombian President, Juan Manuel Santos, is to receive the 2017 Tipperary (Ireland) International Peace Award. The announcement was made on Wednesday, August 1st by Tipperary Peace Convention through its Hon Secretary, Mr Martin Quinn.

The award recognises the efforts of President Santos in bringing peace to Colombia and for the historic agreement that put an end to more than 50 years of fighting by the FARC guerrilla army.

“As President Santos prepares to step down as President of Colombia after 8 years in Office, it is appropriate to recognise the President’s efforts and tremendous vision to bring peace to his country through an agreement that, after almost 5 years of talks, put an end to more than 50 years of fighting, and has seen some 10,000 former fighters disarm and begin to enter civilian life and 10 former FARC leaders take their seats in Congress.

“After the initial peace deal with FARC was rejected in a referendum, President Santos returned to the drawing board and showed enormous courage and commitment by persevering with the negotiations which ensured the drafting and signing of a new deal that was subsequently ratified by Congress. President Santos leaves Colombia a much better and decidedly more peaceful country than when he assumed office and without doubt history will judge him kindly for his efforts.”

The Tipperary International Peace Award will be presented to President Santos at a ceremony in Tipperary later this year. The president has confirmed that he will travel to Tipperary to accept the award. Full details to be announced over the coming weeks.

Responding to the news of his selection, President Santos issued the following statement: ‘I was pleased to make an official visit to Belfast in November 2016, a couple of weeks before the Colombian Peace Agreement came into effect. Ireland has been and continues to be an inspiration for countries trying to pursue their own peace processes.

‘Certainly, the success of the Northern Ireland peace process is a constant reminder of what is possible. It clearly demonstrates the dividends that a peaceful future can deliver. The fact that the achievements of the Colombian peace process are being acknowledged by such a prestigious award in Ireland, has particular significance for Colombians. I am honoured to be able to accept the Tipperary International Peace Award on behalf of all the victims of the conflict and the many that have worked tirelessly to bring about peace in Colombia’.