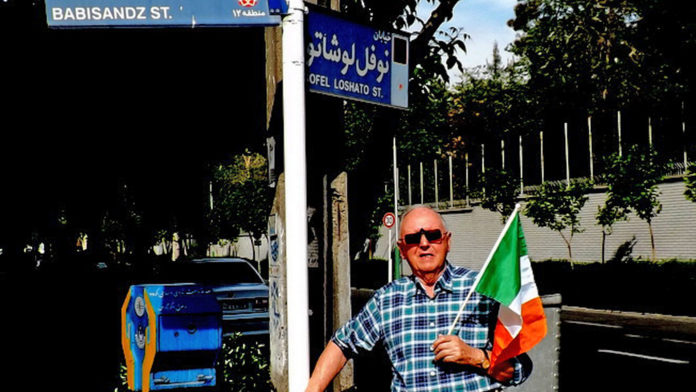 The perception of the Iranian people, particularly from those living in the western world, is often one of suspicion and cynicism, perhaps summed up this week when US President Donald Trump decided to pull the US out of the Iran nuclear deal.

However, for one tourist who visited the region recently this interpretation of the Iranian people is misunderstood. Michéal Ó hAonghusa from Mitchelstown visited Iran on a 12-day trip and wishes he had made the stay a much longer one.

You see, for Michéal the people are the ‘jewel in Iran’s crown’. Some of the friendliest people he has met, and for a man who has visited 47 countries, it says a lot.

“They are the nicest people on the planet but I knew that before I left Ireland because before I travel anywhere, I buy the Lonely Planet book about the country I’m visiting. I read it from cover to cover and that’s my Bible and it said that if there are a friendlier people on the planet we haven’t found them. We think we are friendly here in Ireland, but the Iranian people are unbelievably friendly. Once they know you are a foreigner they want to talk to you and they start off by inviting you in for tea,” said Michéal.

During his stay in Iran, Michéal who is a founder member of Mitchelstown Credit Union, visited Bobby Sands Street or Babisandz St as the Iranians’ spell it, named after the Provisional IRA member who died in 1981, aged 27, after 66 days on hunger strike.

Passers-by don’t pay much attention to the unassuming street in downtown Tehran, but for an Irish tourist it stands out.

“It’s a huge street in Iran because it’s in the diplomatic quarter where the British Embassy is. It was once called Sir Winston Churchill Street but students changed it after reading what was happening in the Maze Prison. The British Government weren’t at all happy about it and to ensure letters to the Embassy didn’t have to use the name of Bobby Sands, they sealed the entrance and made another one at the side of their compound, changing their address to Ferdowdsi Avenue.”

If you walk around Tehran there are numerous murals, and posters of soldiers who died in Iran-Iraq war of the 80s, so Bobby Sands Street doesn’t seem out-of-step to locals. For Michéal however, it’s a street that will live long in his memory and so too the people of Iran, ‘the friendliest nation on the planet’.