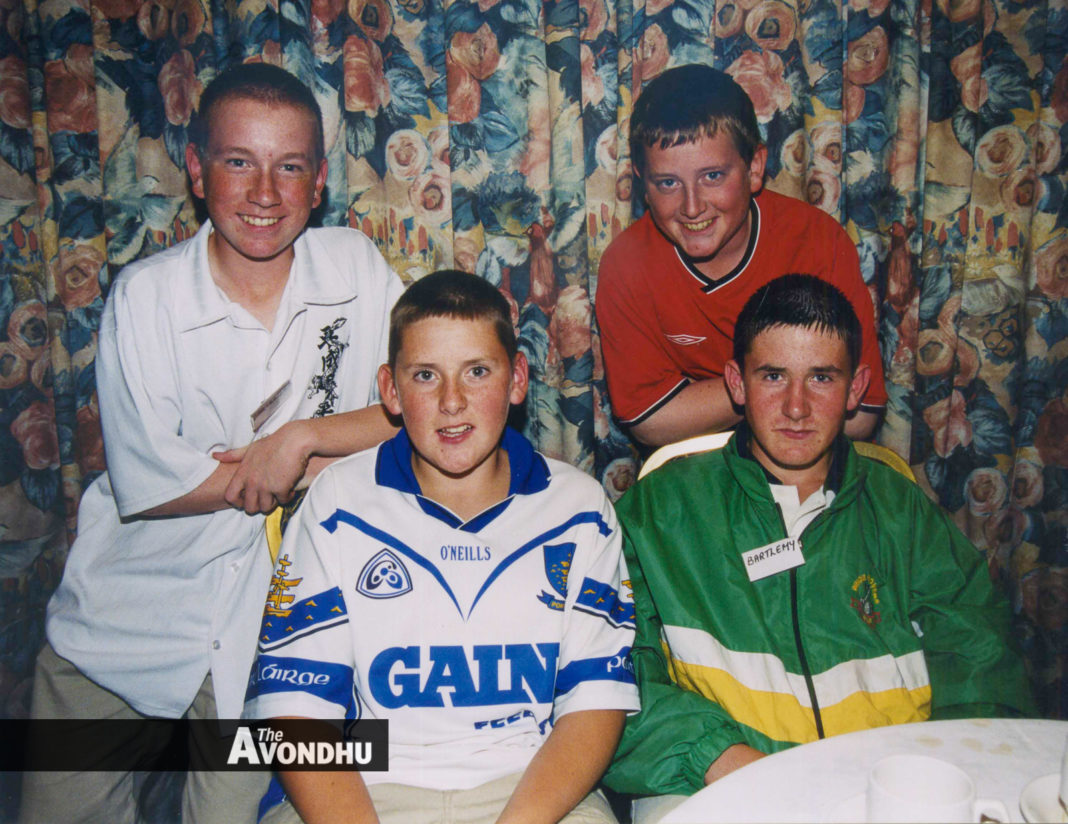 In Glanworth 21 years ago, the farming community vowed to fight tooth and nail plans to close the Dairygold branch in the village, as well as those in Ballyhooly and Kildorrery.

Fermoy Rowing Club had a day of mixed emotions as they celebrated the launch of four new boats, named in memory of individuals ‘who will be forever linked with rowing in Fermoy’: ‘Stuie’ (called after Stuart Hanley), ‘Dick Stritch’, ‘Christina King’ and ‘John Heffernan’ were launched in an event with special guest Brian Crowley MEP in attendance.

Big traffic changes were heralded for Mitchelstown as a new era of parking and driving laws were about to come into effect in the town. Two-hour parking signs were to be in place, the replacement of herringbone parking with parallel, with both Robert Street and James Street made one-way systems.

Meanwhile, Michael Noonan TD visited Mitchelstown in September 2001 and was pictured on the front page reading what else, but The Avondhu!

21 years ago The Avondhu carried a story about a golden labrador who had thankfully found his way home. The dog warden, however, reminded pet owners that if the animal had not been collected and had been identified as a stray, he would have been ‘destroyed’ in five days as was the policy.

The official launch of the Glenroe Walking Trails was scheduled. Three trails with a combined distance of 40km had been developed over two years with a FÁS team.

Ballyguyroe Landfill was back in the news as there were allegations of blood disposal at the site. Cllr Joe Sherlock referenced an article which claimed a high percentage of birth defects in those born within 2km of landfill sites, and said it was vital that the closed cells be re-examined.

In Mitchelstown, funding was secured for a bus park at St Fanahan’s College, while a pedestrian crossing was refused for Ballyhooly National School as traffic numbers were not high enough.

Donal Caples from Curraglass and Gerard Donegan from Fermoy returned from the World Skills Championships in Seoul, South Korea with Donal receiving a Diploma of Excellence, and Gerard a Certificate for Excellent Work in their respective disciplines.

A noble motion to erect signs for Fermoy’s (many) World champions was posited by Cllr Richie O’Leary. However, caution was expressed as some feared ‘leaving someone out’ while another councillor sagely noted that the champions of today will not be the champions next year. Meanwhile, the letters page in The Avondhu included one succint and pointed piece: ‘Most councillors are a disgrace’.

The parish of Ballylanders prepared for the re-internment of the remains of local patriot Patrick Maher, who was executed in 1921. Ten prisoners who had been executed were buried on the prison grounds in Mountjoy, and nine were to be reinterred in Glasnevin Cemetery. Patrick, however, was to come home to Limerick for a complete military funeral.

In Doneraile work was progressing on the new Londis Top Shop and Filling Station on the main street.

A green and white car that had been following Limerick’s hurling fortunes in 2001 was won in a well-publicised raffle by Anglesborough’s Pat English.

A Derelict Sites survey was called for in Fermoy as ‘the council cannot afford to be complacent’ about the matter.

Elsewhere, residents of Abbey Farm in Mitchelstown had formed an association for the benefit of the area, and they intended putting in speed calming measures and replacing kerbing, and to open a Credit Union account to to allow for funds to be raised for the maintenance and upkeep of the area.

Glenville celebrated its new Youth Club, as a large crowd gathered in the Squash Court and Handball Centre to hear a variety of speakers wish the project well. The club was blessed by Fr Denis Cashman. The youths themselves were given scant mention, but a photo showed over 30 eager young people smiling (and waiting for the speeches to end, perhaps?).

In The Avondhu Classifieds, you could buy Bord na Mona turf in two or four ton loads, and one enterprising company were offering to design a website for any business for £195: “Why not put your products or service on the World Wide Web”.

In Cavanagh’s Electrical, Fermoy a 28” widescreen TV with a video player and a DVD player (all separate units) would cost you £899.

Finally, Ballyhooly were looking ahead to their battle with Ballyclough in the North Cork Junior B Championship final, while at Castlelyons Pitch and Putt Club St John O’Connor won the Toss Bryan competition. Further north, Ballygiblin’s U16s had won the club’s fourth North Cork title over rivals Milford under captain Kieran Walsh.