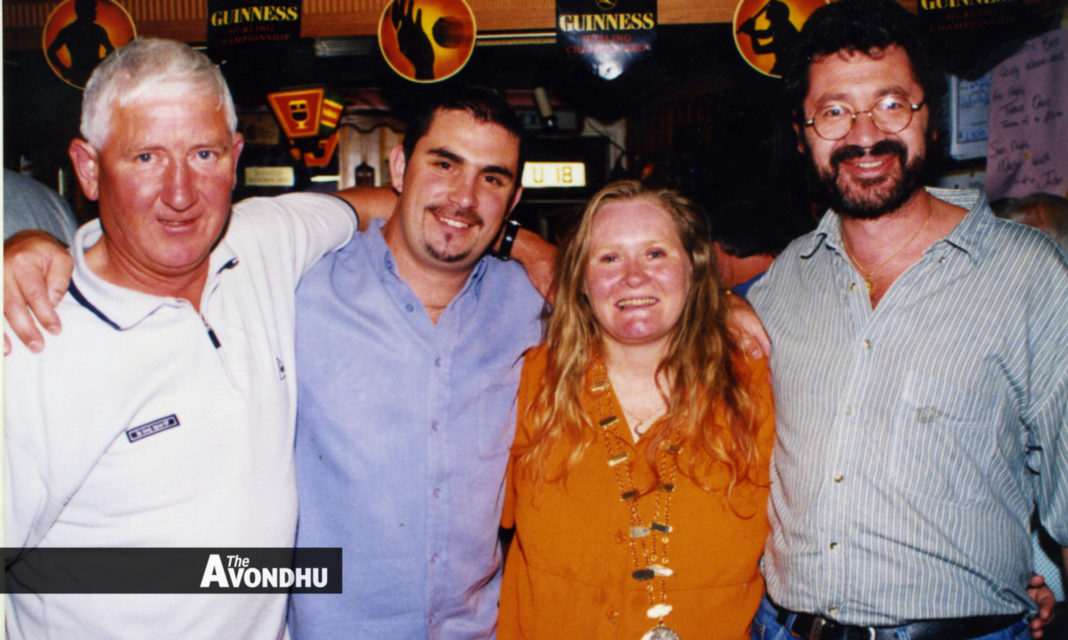 One front page of The Avondhu in August 2001 told of how 25,000 made their way to Mitchelstown for the music festival, cementing its reputation at the time as the largest free music event in Ireland.

Castletownroche residents’ were getting set for their festival, as they housed the largest marquee in Ireland (64ft by 208ft) where The Wolfe Tones would entertain the crowds. However, the full line-up for that particular weekend was much more intriguing: advertised was a pub crawl (’10 People Required’), a Publicans’ Donkey Race, a Lady Publicans’ Doughnut Eating Competition, and a Granny Egg and Spoon Race. A foam party was to take place in Batterberry’s Bar, and a village-long balloon race and wheelbarrow race would also take place.

In Fermoy, Michael Flatley returned home to Castlehyde, having touched down in Cork Airport in his Gulf Stream G5 Jet before hopping in a helicopter to Fermoy “to put his million pound feet up”. Meanwhile, the town began the countdown to Féile Fhearmui 2001. The Donncadh Lynch Ceili Band were to be one of the star performers, as well as Ron Kavana, Mick Coyne and Steve White.

An innocuous news article noted the ‘growing’ Galway Race Festival, that welcomed 187,974 people to the seven-day meeting in 2001. Betting turnover was £11.9 million, with the Tote generating another £5.4 million, up 12% on the previous year.

History repeats itself, as an article told the woes of a lady who was returning home from the UK and was finding it impossible to buy a house with her humble £100,000. Upon viewing houses, she had been urged to buy on-the-spot by auctioneers who told her the property would be gone within the day if they wanted. “I am glad the Celtic Tiger is roaring, but the attitude of some people with regard to selling property seems to have led to a very greedy atmosphere,” she noted.

Flash flooding in Tallow was allegedly compounded by square concrete planters in the town, which Tallow Urban Concern Association said impeded the free flow of water. The group continued their call for their removal and the reinstatement of diagonal parking.

Dairygold in Mitchelstown welcomed two important visitors from The Hague; Ms Yasmin van Hamersveld and Mr Abdul Qayyoem of the Halal Feed and Food Inspection Authority. They visited the site to certify its milk powder as being Halal. The company said that while not all production was Halal, they had to develop an understanding of other cultures. Not a bad idea, as Mr Qayyoem pointed out that there were 1.5 billion Muslims in the world – a sizeable market.

The position for a single litter and traffic warden was advertised, to be shared between Mitchelstown and Charleville. The job spec was to issue parking and litter fines, as well as “casual trading and other duties”.

Resurfacing of Upper Cork Street and the Fermoy Road in Mitchelstown was warmly welcomed by all, who welcomed their easy sleep “without having to endure vibrations from passing lorries”.

In Kildorrery, there was “surprise, worry and anger” at the plans for a private dump in Ballyguyroe North. As the council-operated dump at Ballyguyroe was shortly to be closed, the matter was compared to the Hydra: “no sooner had they cut down one dump, when an even greater one threatens to rise up in its place”.

South Coast TV were lawyering up, as their application for a licence lodged the previous November had still not received a satisfactory response. They worried that in the delay the likes of Sky and Chorus would take potential customers; owner John Hurley had also applied to carry out tests on using the internet through digital television, then ‘very popular’ in the UK.

A ‘Back to School’ feature page carried adverts from Hyland’s Bookshop in Mitchelstown for new and second-hand books, and uniforms from Shaws and Hickey’s in Fermoy, and Doran’s and Condon’s in Mitchelstown.

In sports news, Killavullen drivers Valerie O’Hanlon (All-Ireland ladies champion), Jerry O’Sullivan and John Shanahan returned from the All-Ireland Hot Rod Championships with a haul of silverware. The Cork ladies minor hurlers were crowned All-Ireland champions, beating Kilkenny 6-15 to 0-7 for the honour; the team included St Catherine’s Camogie Club’s Denise Twomey and Watergrasshill’s Marie O’Neill. Meanwhile, the Glanworth hurlers were looking ahead to the Junior B championship final against Churchtown.