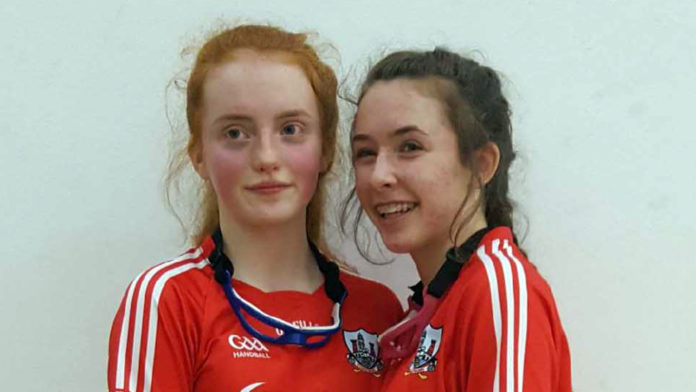 Kilworth Handball Club will be represented at the All-Ireland 40 x 20 juvenile handball finals that take place in Kingscourt, Co Cavan this weekend.

These finals are the culmination of intense national and provinical competitions as the country's top players go in search of All-Ireland glory.

Locally, Muireann O'Brien from Kilworth and her partner, Celine Kelleher (Boherbue) contest the U15 doubles final.

The duo played brilliantly in Mallow last Sunday where they saw off the challenge of Tyrone's Bronagh McWilliams and Dervla Farley to book a place in the All-Ireland. The Cork girls won 15 – 07, 11 – 15 and 15 – 14.

The Cork girls have put in massive effort to get to this point and are delighted to be part of what is the biggest occasion in juvenile handball.

Muireann, a pupil in Loreto Secondary School, Fermoy is from a sporting family and her uncle, Shane O'Brien was an accomplished handballer.

She has benefitted from the tuition of Mick Dunne, Tom Dunne and John Horgan along with input from Danny Linehan, Brendan Hurley and Chris Hurley (both from Conna).

Great credit is due to the small group of people who've kept handball going in Kilworth and also to Dan Noonan who is so supportive of the club.

Muireann's playing colleagues in Kilworth include Samantha O'Donnell and Anna Dunne. They, along with everyone in Kilworth, wish Muireann the very best this weekend.

Hayden also in the shake up

Regular readers of The Avondhu will be aware of talented Fermoy handballer, Hayden Supple. Hayden is flying the Fermoy flag as he contests the U14 singles final.

Again, we extend every good wish to Hayden as he attempts to win an All-Ireland title.