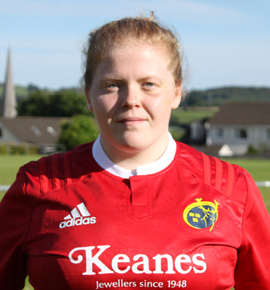 Playing the number one ranked women’s rugby team in the world on her 21st birthday, Ballyhooly’s Leah Lyons once again made a strong impression for Ireland in their third and final match in the November Series in Dublin on Sunday.

Leah made an eight-minute appearance as a temporary substitute before playing the final 17 minutes as the Black Ferns ran out 38-8 winners at the UCD Bowl.

Leah made substitute appearances against England and Canada earlier in the month, picking up her first three international caps, while attention now turns to 2017 with the impending Six Nations and World Cup. Speaking to The Avondhu this week, she said the November Series was ‘a difficult challenge against top opposition, but a taste of what to expect at the highest level’.

“They were three massive teams that we played against, we were expecting a tough challenge off all of them. We were very unlucky to lose against England, and then Canada and New Zealand are two massive teams with professional Sevens players coming back into their squads which would make a difference.

“I’m happy with most things but I suppose you can’t be happy with everything. There’s always ways to build on the performances that we had. It’s a massive step at the moment I’m after taking. We’ll look now at Six Nations and the World Cup, so I’ll try and get on those squads again.”

Leah, who plays with Munster and Highfield, is the latest Ballyhooly native to make their mark on the national rugby scene. “We’d have Mike  Ross and also his cousin Clive, who plays up in Ulster, so three from one village isn’t bad!” she said.

Looking ahead, Leah said the provincial series is starting with a trip to Belfast to play Ulster in the Kingspan Stadium this weekend, before resuming with club games in the New Year.

Seeds are the living heritage we can all help to protect