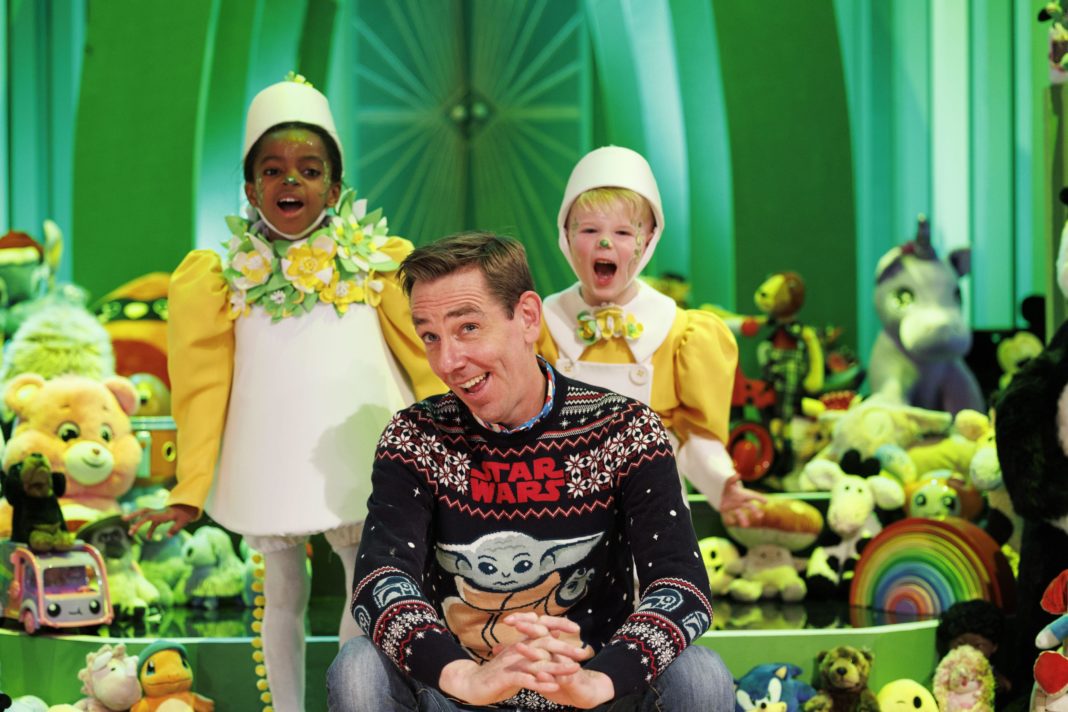 The theme of this year’s Late Late Toy Show has been revealed as host Ryan Tubridy, Dorothy, Toto and a whole host of munchkins are off to see the Wizard, the wonderful Wizard of Oz linked arm-in-arm for the most magical night on Irish television.

Somewhere over the rainbow escapism, love, courage, friendship and unity will feature as key undertones of this year’s themed show.

“I can’t remember the last time I was this excited for the Toy Show given the previews I have had of it this week,” said host Ryan Tubridy.

“It’s time to simply get the treats in, to get the crisps in and the spirit back in the house and prepare yourself for what I hope will be the greatest night of the year for boys and girls all over the country because each and every one of them whether they are in hospital, at home or whether they are at their friend’s house.

“Wherever they are, this is for them, they deserve it. I look forward to everyone’s company immensely.”

This year’s Late Late Toy Show will see bluebirds fly as it boasts a huge cast with more than 200 young performers and talented toy testers taking part in tonight’s extravaganza. The children hail from all over Ireland with the youngest little munchkin aged just four years old.

Where troubles melt like lemon drops this year’s Toy Show aims to provide some sustainable and cost-effective toy alternative options with 3D Model Croke Park and Arket, DluluKaloo wooden toys destined for display in the biggest storefront in the country.

Last year, our global audience tuned in from over 100 countries to watch the spectacle including Irish hot spots like London, New York, Boston, Dubai and Sydney.

So, no matter who you are, or which country you are from, stream for free on RTÉ Player at 9.35pm – everyone is invited.

Audio Description (AD) will also be available for the repeat on Sunday at 3.15pm and on Monday night, and afterwards on RTÉ Player.

A fully accessible version (with subtitles, ISL and AD) will be broadcast on Wednesday, 30th November, which will also be available to stream.

We will also provide Audio Description (AD) for Blind and Vision Impaired audiences on the Sunday repeat. AD version will be available on RTÉ Player after the programme airs on television. The programme will be audio described by Clara Murray and Kevin Sherwin.

The RTÉ Toy Show Appeal is back for its third year, which last year ultimately raised a staggering €6.8m and provided support to over 160 children’s charities. With at least one project in every county in Ireland receiving funds, it is estimated that the monies raised helped over 1.1 million children and family members in 2022.

Donations can be made via www.rte.ie/toyshowappeal and by the Revolut app.

December 2, 2022 0
Cope Foundation is encouraging people to talk about inclusion this weekend, as the charity is set to host a special event on Cork’s Harley...