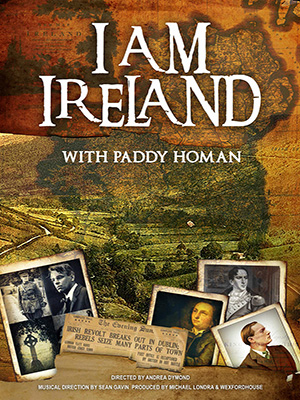 When Paddy Homan’s first CD was launched during Cork’s European Capital of Culture celebration in 2005, Leo McMahon of Cork’s Southern Star, wrote: “If you enjoy a good Irish song performed with passion and feeling, get yourself a copy of ‘Far from the Land’, the debut CD album of Cork tenor Paddy Homan”.

Three CDs later, and after hundreds of performance engagements, Paddy Homan has a growing following throughout the United States and in Ireland.

Paddy brings his highly acclaimed show ‘I Am Ireland’ to The Village Arts Centre, Kilworth on Sunday, October 9 and if the critics are anything to go by, this is one show you should not miss.

Paddy, now based in Chicago, is joined by three traditional Irish musicians for the ninety-minute show.

The Chicago Tribune’s cultural commentator Rick Kogan, applauded the show: “There will be all manner of celebrations during the centennial, but it is hard –  almost impossible – to imagine any will be as moving, entertaining, enlightening or soaring as Paddy Homan’s ‘I Am Ireland’.”

The Irish American News critic Mike Houlihan, confirmed that opinion: “The other night I glimpsed a revelation of Irish revolution through music and songs hundreds of years old…I watched an Irishman stand in half-light to tell us the story of the Irish nation.”

In fact, this show would be ideal for schools to bring their students to, to get a different perspective on not only Irish history, but a different style of learning!