Home All Opinions My Own Enda helped give Ireland marriage equality, but his pal Mike Pence wants... 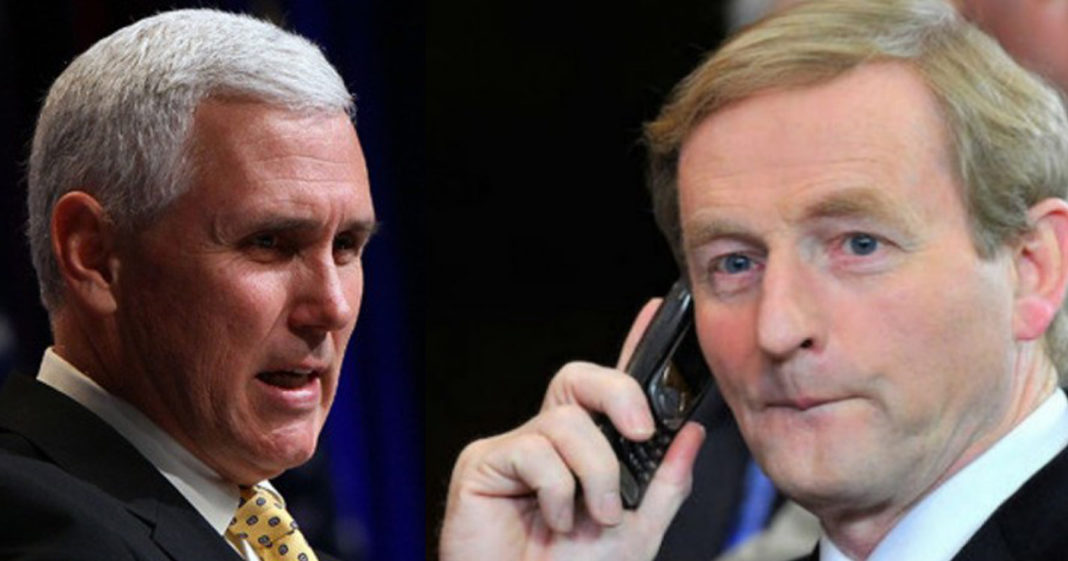 Ireland is fortunate to have the ear of the White House, but it might be nice if – once in a Blue Moon – our Taoiseach spoke a little truth to power, writes Donal O’Keeffe.

Last week, An Taoiseach, Enda Kenny declared to the world: “Had a really good conversation tonight with US VP Elect Mike Pence. He certainly knows Ireland and the issues that matter to our people.”

I wonder if the Taoiseach told Pence that – only a year and a half ago – Kenny led a government which gave to Ireland a marriage equality referendum which we passed by 62%.

It was initially Labour’s proposal but – to be fair – Enda Kenny was the Taoiseach who gave us the referendum and it turned out that marriage equality proved to be an issue which mattered a great deal to many of ‘our people’.

In case you – and Enda – didn’t know, Mike Pence wouldn’t exactly be a fan of marriage equality. In fact, it would be fair to say that Pence, a hardline Evangelical Christian, has possibly the worst record on LGBT (lesbian, gay, bisexual and transgender) rights of any recent candidate on a major US party’s presidential ticket.

While running for the House of Representatives in 2000, Pence suggested funding be denied to organisations which help HIV sufferers and that money should instead be used to ‘cure’ gay people.

Pence said: “Congress should support the reauthorisation of the (HIV funding) Ryan White Care Act only after completion of an audit to ensure that federal dollars were no longer being given to organisations that celebrate and encourage the types of behaviours that facilitate the spreading of the HIV virus. Resources should be directed toward those institutions which provide assistance to those seeking to change their sexual behaviour.”

This has been interpreted as Pence favouring so-called ‘conversion therapy’, a barbaric pseudo-science which claims to ‘cure’ gay people through aversion techniques. In the past, these techniques included electro-shock ‘treatment’.

Lou Reed said of his own experiences: “They put the thing down your throat so you don’t swallow your tongue, and they put electrodes on your head. That’s what was recommended… to discourage homosexual feelings. The effect is that you lose your memory and become a vegetable. You can’t read a book because you get to page 17 and have to go right back to page one again.”

Last year, Mike Pence, as Indiana governor, signed the Religious Freedom Restoration Act, which allows discrimination against gay people so long as those discriminating claim their prejudice is religiously-based. Now Donald Trump promises to sign the similarly-themed First Amendment Defense Act which would essentially ban government from taking action against those who discriminate against LGBT people on purported religious grounds.

Donald Trump is a charlatan, a huckster and a conman who hasn’t a single core belief. Pence, though, is a very different creature. Pence is a religious fanatic whose homophobia runs all the way through him.

Trump is the living embodiment of H.L. Mencken’s truism “The demagogue is one who preaches doctrines he knows to be untrue to men he knows to be idiots”.

Trump’s stirring up racial hatred – in this election it was against brown people, be they Mexican or Muslim – is nothing new. That stretches back at least as far as the 1989 Central Park Five case, when Trump spent a reputed $85,000 on newspaper adverts for no other reason but to foment racial tension.

God presumably made Trump and Pence, but there’s an old Irish saying which suggests someone else might have matched them.

Bizarrely, the first congratulatory call from a European leader that President-elect Trump took was from Enda Kenny. I have no time for the argument that the Taoiseach shouldn’t have called, and I think those urging Kenny to decline the St Patrick’s Day invitation to the White House aren’t living in the real world at all. We’re a tiny island nation and we’re uniquely fortunate to have, one day a year, the ear of the US president.

That said, and Angela Merkel could have shown him how, Kenny could have politely let Trump know that the world is watching and is very troubled by the wave of hatred Trump stirred up against vulnerable minorities. Without insulting Trump, the Taoiseach might have expressed concerns about the rights of America’s LGBT community.

(As to Trump’s planned attacks on women’s rights, well… in fairness, no, there really isn’t a whole pile Enda could have said. Not with the Eighth Amendment – for which Kenny campaigned – still blighting the Irish constitution.)

Seemingly obsessed with homosexuality, Mike Pence said in 2000: “Congress should oppose any effort to recognise homosexuals as a ‘discreet and insular minority’ entitled to the protection of anti-discrimination laws similar to those extended to women and ethnic minorities.”

Here’s Pence on marriage equality: “Congress should oppose any effort to put gay and lesbian relationships on an equal legal status with heterosexual marriage.”

Earlier this year, Enda Kenny wrote warmly of our marriage equality referendum. “I remember that day – the sun shone, we turned our faces to it and many lives were changed forever”.

I don’t doubt his sincerity. I believe he, like many other conservatively-minded Irish people, made a personal journey on the issue of LGBT rights and I think he can be justifiably proud of being the Taoiseach who facilitated Ireland becoming the first country in the world to legalise marriage equality by popular vote.

I wonder if that sunshine day crossed Enda’s mind at all while he spoke with the homophobic Vice-President-elect. I wonder if he regaled Pence with one of his “I met a man” (or two men, or two women) stories about the lives that he, Enda Kenny, helped change forever.

I wonder if he told Pence that those of us in Ireland who voted for marriage equality are deeply concerned about Trump’s plans to row back on the protections President Obama put in place for LGBT rights.